Dr. Harold "Sonny" White is still working on a warp drive at NASA's Johnson Space Center. Their work is still in the experimental stages but that doesn't mean they can't imagine already what the real life Enterprise ship can look like. You're looking at it right now.

This is the starship that may take us where no human has gone before. And it has me screaming like a little Klingon girl.

Concept 3D artist Mark Rademaker told io9 that "he worked with White to create the updated model, which includes a sleek ship nestled at the center of two enormous rings, which create the warp bubble." The updated model is the one you can see above, a variation of the original concept which, according to Dr. White, was rendered by Rademaker based on an idea by Matthew Jeffries, the guy who came with "the familiar Star Trek look." This is the original warp drive spaceship concept:

Dr. White—whose daily life is working in future propulsion solutions for interplanetary travel in the near future, like ion and plasma thrusters—developed new theoretical work that solved the problems of the Alcubierre Drive concept, a theory that allowed faster-than-light travel based on Einstein's field equations in general relativity, developed by theoretical physicist Miguel Alcubierre.

A spaceship equipped with a warp drive would allow faster-than-light travel by bending the space around it, making distances shorter. At the local level, however, the spaceship wouldn't be moving faster than light. Therefore, warp drive travel doesn't violate the first Einstein commandment: Thou shall not travel faster than light.

Here's more views of the IXS Enterprise during its construction phase, the concept that Dr. White developed with Rademaker: 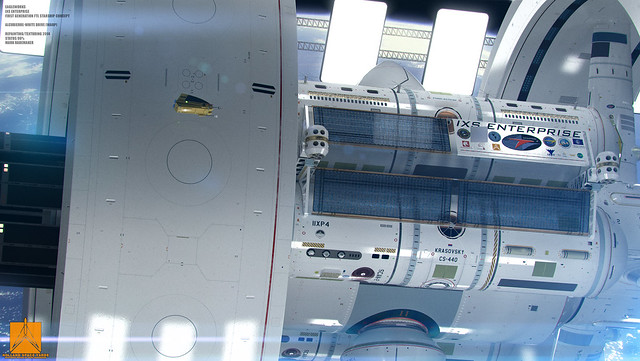 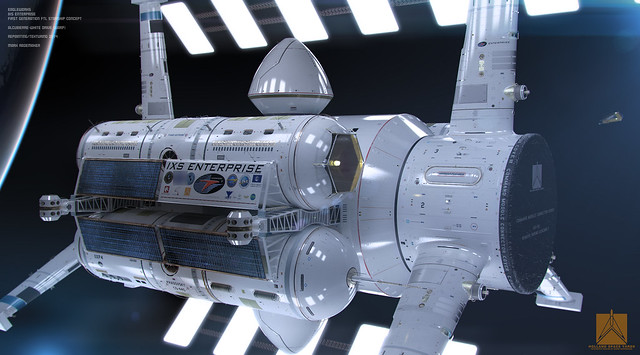 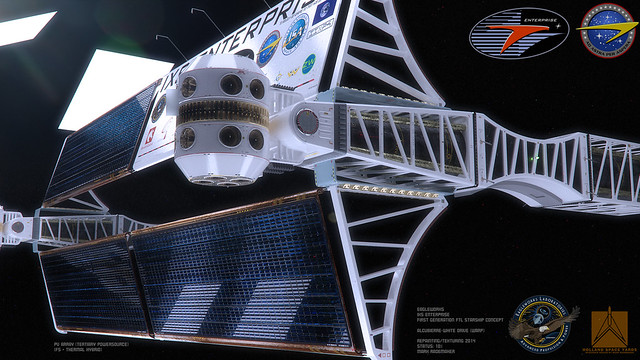 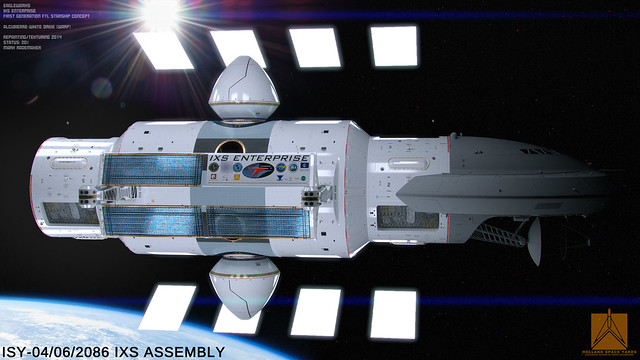 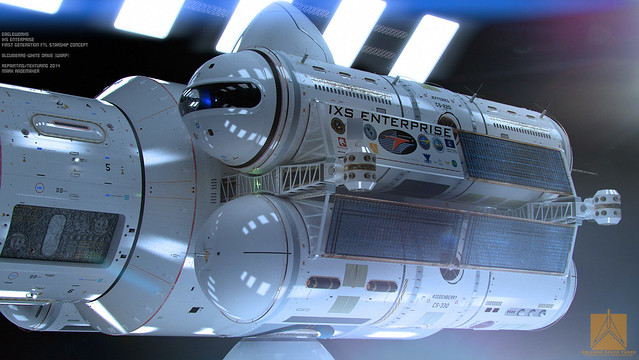 The spacecraft reminds me a bit to the spaceship in Chris Nolan's Interstellar, a film that—in theory—will portrait realistic faster-than-light travel. This is partial view of the ship in the movie, which also has a ring of some sort around it.

See, Dr. White and his colleagues aren't making a movie or coming up with 3D renders for the sake of it. They just don't just believe a real life warp drive is theoretically possible; they've already started the work to create one:

Working at NASA Eagleworks—a skunkworks operation deep at NASA's Johnson Space Center—Dr. White's team is trying to find proof of those loopholes. They have "initiated an interferometer test bed that will try to generate and detect a microscopic instance of a little warp bubble" using an instrument called the White-Juday Warp Field Interferometer.

It may sound like a small thing now, but the implications of the research huge. In his own words:

If his work is successful, he says that we would be able to create an engine that will get us to Alpha Centauri "in two weeks as measured by clocks here on Earth." The time will be the same in the spaceship and on Earth, he claims, and there will not be "tidal forces inside the bubble, no undue issues, and the proper acceleration is zero. When you turn the field on, everybody doesn't go slamming against the bulkhead, which would be a very short and sad trip."

Every time I read that paragraph I smile. These renders just make my smile so wide it looks stupid.

OK, Dr. White, you got our attention. And since the government isn't paying any—can someone like Bill Gates please give this man the money he needs?