Mars or bust: the new space race to put humans on the red planet 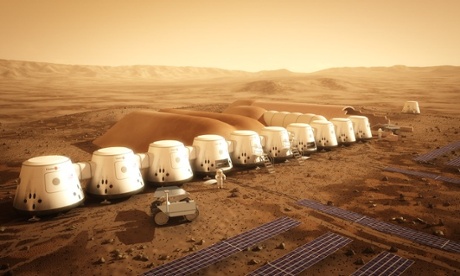 Two years ago tomorrow, a nuclear-powered rover, the size of an SUV and weighing almost a tonne, was lowered onto the surface of Mars. Touching down ever so gently, Nasa’s Curiosity landed with an almighty roar.

It sent a message to the world that a new space race – a race to eventually set foot on Mars – was well under way.

Who are they? A non-profit founded by Dennis Tito, the first ever space tourist.

What’s their big idea? A flyby. They plan to orbit Mars but never actually land.

Is there any point going to Mars if you’re not going to land? There’s a lot to learn from the journey. They want to know more about how humans deal with long periods in space, both mentally and physically.

Sounds fun. When do we leave? Sadly, no Brits allowed. The crew is going to be all American, a man and a woman, preferably married.

OK, when does the happy couple leave? In 2018. That’s when the Earth and Mars will align, offering a rare orbit that will allow a craft to make the round trip in only 501 days, which will save on fuel. And in 2018 there will also be the lowest levels of solar radiation for over a decade. So less need for the SPF 30,000 sun cream.

That’s only four years from now. What if they are not ready? There’s a plan B. In 2021 there will be another rare orbit, this time involving a slingshot around Venus on the way to Mars taking 589 days.

A flyby sounds cheaper than landing. How much will this all cost? Between $1bn and 2bn is the estimate, funded largely by Tito.

Who are they? A non-profit founded by Dutch entrepreneur, Bas Lansdorp.

What’s their big idea? A one-way trip to Mars.

Wait, no return trip home? Yup. Once you’re there, you’re there. Their plan is to eventually establish a permanent human settlement.

Sounds like a commitment. How many people would be up for that? Quite a few, it seems. Mars One recently invited members of the public to apply to be their first astronauts and received 2,782 applications, over 100 of which were from the UK.

And how many will actually get to go? So far, just over 700 have been invited for an interview. From there, a selection processes will whittle down the list to six groups of four astronauts.

How much is it all going to cost? An estimated $6bn plus the cost of supporting the astronauts for as long as they live on Mars.

Where are they getting the money from? They plan to document the entire journey on a reality TV show, which they hope will largely finance the expedition.

Who are they? A private space exploration company founded by Elon Musk.

What’s his big idea? A fleet of reusable rockets, launch vehicles and space capsules to transport humans to Mars and back again.

Why does he want to go to Mars? Musk’s ultimate vision is for humanity to become a multi-planetary civilisation. He wants to build a self-sustaining city on Mars of up to 80,000 people, so that in the event of a catastrophe on Earth, we have somewhere else to go.

Who would get to go? Unclear at this stage but Musk may well be on one of the first rockets himself.

How much will this all cost? The total costs are unclear. But Musk thinks he may be able to charge the average person as little as half a million dollars for a round trip to Mars.

You mean, half a BILLION dollars? Nope, it’s not a typo. Half a million dollars.

Time will tell how these and other organisations will fare. But, in my view, one fact is beyond question: the ambition to send a human to Mars is the right one.

The moon landing was arguably the most important achievement in the history of humanity. Putting human footprints on Mars would be an even greater accomplishment. More than any other celestial ambition, Mars promises the answers to some of our most profound questions, none more so than whether life exists elsewhere in the universe.

It was a race that got us to the moon 45 years ago. And it is this current race – this amazing race – that will help us one day get to Mars.
mars space