5 Top Landing Sites For A Manned Mission To Mars 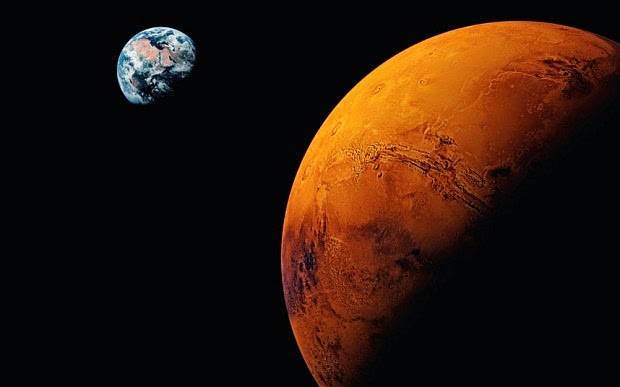 If the European Space Agency (ESA) can put a probe on a reckless comet out beyond the orbit of Mars, suddenly sending humans to the Red Planet seems altogether doable. Coupled with last week’s successful test launch of NASA’s Orion spacecraft, talk of astronaut encampments on Mars now actually appears credible.

If so, where would the first manned mission to Mars choose to set up shop?

There are three basic criteria for picking a Mars manned landing site — a spot that’s sustainable in terms of water, energy generation and building materials. One that’s scientifically interesting for a lengthy mission. And, most importantly, one that is safe to land. Thus far, most researchers remain wary of committing themselves to any given site.

“But there’s no time that’s too early to get [the site selection process] started,” John Grant, a planetary scientist at the Smithsonian’s National Air and Space Museum in Washington, D.C., told Forbes. “The more imaging and radar data you’re able to collect about a site; the better your odds of satisfying all the constraints.”

Grant, who was co-chair of NASA’s Mars Curiosity Rover landing site steering committee, doesn’t think a human landing site selection process would look a whole lot different from that for the Mars rovers. Engineering, science and resource criteria would drive the process forward, with the overarching idea, he says, being that “if you don’t land safely, you don’t get anything.”

Here is a countdown of five top possibilities as suggested by Brian Hynek, a planetary scientist and Director of the Center for Astrobiology at the University of Colorado at Boulder.

These equatorial lava caves were only discovered in the last few years by images that identified skylights, or breaks in the top of a buried lava tube, Hynek told Forbes. He says that a potential landing site near the large shield volcano Pavonis Mons in the Tharsis region hosts a number of lava caves which could shelter astronauts shelter from deadly cosmic and solar radiation as well as provide a constant ambient temperature.

Hynek also notes that the proximity to such volcanic sites would offer astronauts a scientific boon. That’s because understanding Mars’ volcanic history would constrain models of the planet’s interior and climate, and determine when its volcanoes were actually active.

Pros: “The astronauts wouldn’t get cancer in three months, which may be a possibility if they are sitting on the surface for that long,” said Hynek.

Cons: The science isn’t as compelling as places with more ancient crust or places with current liquid water. Access to the lava caves could also be challenging. “They are all at fairly high elevation on the volcanoes and at very discreet locales, so that is a challenge for safe landing,” said Hynek. As a result, he says, the astronauts would also need to bring their climbing harness and rappelling gear.

However, as Grant points out, unlike the northern plains where exposed ice has actually been spotted, he warns that Mars’ lava tubes might not have such resources.

“If you’re relying on water to be present and easily accessible, then the most risky and least sustainable would be the lava tubes,” said Hynek. “We don’t know of any water at the lava tubes and don’t expect it there.”

A northern Martian highland made up of a very ancient patchwork of dense impact craters dating back billions of years.

“These ancient terrains show evidence of water within the shallow crust and can tell us a lot about the early history of the solar system,” said Hynek.

Pros: Accessing this old crust could answer many science questions; such as what were the nature of Mars’ earliest geological processes; the ages of its surfaces; and what its climate was actually like at the time its rivers and deltas were forming? Hynek notes that Arabia Terra also has plenty of safe landing sites.

Cons: “Water here would be bound in mineral structures so in terms of energy and technology, it would be harder and more costly to extract,” said Hynek. “But it is still extractable by current techniques and could be used by astronauts.”

Hynek also notes that it might be hard to place the region’s local science results in the broader context, given that it’s such old and beaten-up terrain.

Although such glaciers are thought to have ceased forming a few million years ago, researchers say their “fossil” remnants in the form of water ice at shallow depths may persist today. Hynek says understanding the present distribution and character of ice on Mars is paramount to understanding its climate and habitability.

Cons: Because it’s fractured and crevassed, Hynek says it would likely be necessary to land off the glacier and traverse over to it to bring the ice and water back to the astronauts’ habitation module. Just as on Earth, walking on Martian glaciers would also be dangerous.

Active gullies and/or recurring slope lineae (RSLs) — narrow, dark warm-season water flows inside this 4,000 km long, 200 km wide and 7 km deep canyon — are thought to be spring-like deposits where groundwater periodically breaks through an ice plug and pours out onto the surface.

“If microbial life still exists on Mars today, it would probably be found in these subsurface aquifers,” said Hynek.

Pros: Daytime temperatures can get close to 32 degrees F (0 degrees C). While surface water may make it to the surface only a couple of times a year, such liquid aquifers may be accessible.

Cons: Accessing hidden aquifers up slopes that are hundreds of meters above the landing site would require some doing.

“And once you had climbed up to the source region,” said Hynek, “you’d still have to drill through the ‘presumed’ ice plug to access the water.”

As Grant points out, even if astronauts are able to tap into such hidden aquifers, the water may be very briny and need processing before being used.

Hynek also notes that a Valles Marineris landing would first require some understanding of wind speeds within the canyon itself. Otherwise, horizontal winds in such a deep canyon could blow a landing craft woefully off course.

“Scientifically, one could do what we do on Earth, drill cores into the ice and tease out tens of millions of years of Martian climate history,” said Hynek. “Microbial life has also been found in and under Earth’s ice caps, so that a possible Mars’ science objective too.”

Pros: Water is close by. It’s very flat for landing; and since Mars’ solar orbit is larger than Earth’s, its northern summer would have nearly six months of continuous daylight, Hynek says. This would allow direct-to-Earth communications most of the time, in contrast to non-polar sites which would have to rely on links through orbiters.

Mars’ North Pole is also 6 km lower in elevation than its South Pole, so there would be more time to slow the craft and correct its position, to ensure the first Mars astronauts have a safe landing.

Hynek says NASA’S Phoenix polar lander did observe droplets of liquid water associated with inorganic perchlorate salts, all at high latitudes. So, he says, he wouldn’t “rule out the possibility of finding evidence of life near the poles.”

If Apollo mission lunar history is a guide, however, the first human Mars landing will arguably be an open and flat mid-latitude terrain.

“We had one Mars 2020 lander site selection workshop last May,” said Grant. “Right now, thirty sites are on the table; some of which could conceivably be considered for human landing sites.”

Future missions like NASA’s Mars 2020 rover will also demonstrate new technologies that could help astronauts survive on Mars, Trent Perrotto, a spokesman at NASA headquarters told Forbes. To that end, Perrotto points out that the space agency is investing in technologies for In-Situ Resource Utilization (ISRU) — the ability to find and use natural resources beyond Earth.

Technology to split molecules of water into hydrogen for fuel and oxygen for human respiration is already available. And Perrotto notes that via use of Martian minerals, astronauts may even grow their own food. Onboard 3-D printers, meanwhile, could manufacture parts and structures.

“The science we’re doing on Mars [now] will help inform what human missions and landing sites we’ll pursue in the future,” said Perrotto.

Grant notes that the formal human landing site selection process could begin as late as a decade in advance of launch. But he’d rather err on the side of caution and begin sooner.

“It doesn’t matter if the mission is going in 2035 or 2055,” said Grant. “Right now, we’ve got assets in Mars orbit that can collect data on sites that may be appropriate for human exploration.”