Why NASA scientists are excited about Matt Damon film 'The Martian' 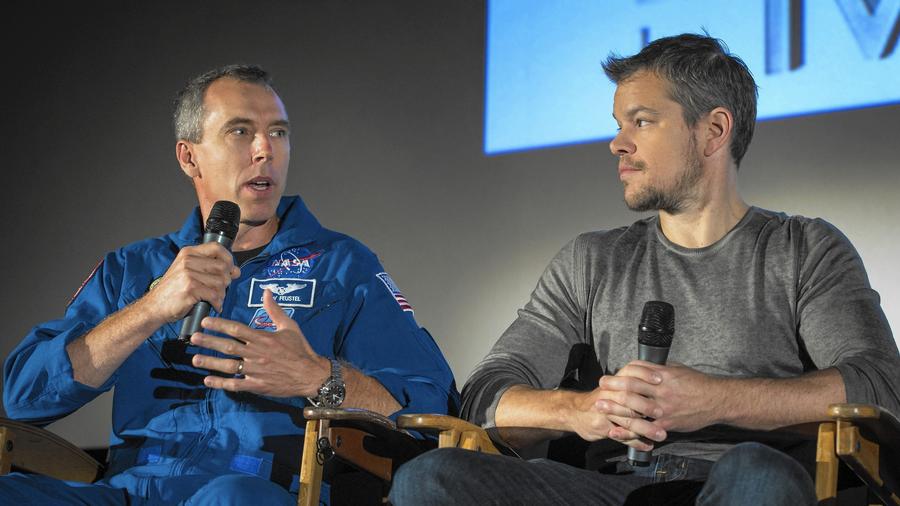 Fearing the wrath of his nerdy online followers, software engineer and amateur author Andy Weir spent countless hours digging through Google to perfect technical details in what became a popular 2012 e-book about an astronaut stranded on Mars.

As director Ridley Scott turned Weir's bestseller into a movie, he had NASA guide him through making Mars and space exploration technically and visually accurate.

The pair's adherence to science ended up producing a movie that has spawned excitement across NASA and the wider scientific community.

NASA plans to land people on Mars in the 2030s. Entrepreneurs like Elon Musk of SpaceX (and Tesla) think their companies can do it in the 2020s.

Whenever it happens, Green wants the world to know that "Mars really is a destination for the human race."

The movie comes at a time when, amid budget concerns, public enthusiasm for human exploration in outer space has waned. Even many scientists believe more knowledge about space can be obtained more efficiently with unmanned spacecraft.

But "Martian," said Green, could be a launchpad for a generation that develops and benefits from technologies tied to reaching Mars. In other words, it could be great publicity for hoped-for manned missions to Mars.

The tale follows Mark Watney, whose colleagues abandoned him on Mars, thinking him dead in a storm. Watney, the self-proclaimed best botanist on Mars, must stretch two months' worth of supplies into enough for four years, when a new crew is due to arrive. With no way to contact NASA or his crew, he makes a GoPro camera his companion.

Damon said his character grips people because we "mere mortals" are amazed by those who maintain "preternatural calm in high-stress situations ... keep their sense of humor and think logically through one step at a time."

The movie is grounded in reality (and literally takes place mostly on ground), making it easier to grasp than recent space flicks "Gravity" and "Interstellar," said Ed Finn, director of the Center for Science and the Imagination at Arizona State University. There also are no laser battles, aliens or epic collisions.

"What this story does really well is imagine a near-future scenario that doesn't push too far of where we are today technically," Finn said.

"The Martian" doesn't take liberties with issues like gravity that other movies might have; Scott noted that they determined heavy spacesuits would make up for the lower gravitational pull on Mars.

Scott also followed details Weir had worked out, like the power-efficiency of space vehicles and how far Watney could travel in them without being fried or frozen. The geography of Mars also lines up as it should.

Scott, the director behind films "Prometheus" and "Blade Runner," had his people cold call NASA's Green last year. Green blocked off 30 minutes that day to chat with the director. They talked three times as long. Scott raised more questions than Green could answer, leading to additional calls and tours of NASA facilities. NASA experts have consulted on other movies, but Green saw this go-about as beyond anything he'd seen in three decades on the job.

"Ridley and I were around when we landed on the moon ... the lunar generation," Green said. Two years ago, landing the Curiosity rover on Mars spawned the Mars generation.

"That's the inspiration that will propel our economy forward by bringing in the scientists and engineers," Green said. "The movie and the book is a fabulous opportunity to celebrate that."

Watching over JPL's faux-Mars site, project manager Jim Erickson said Tuesday that viewing an early cut of "The Martian" left him elated because everything about it felt right. He expects moviegoers to leave with an understanding of the risks and rewards of Mars exploration.

"It's saying getting someone on Mars is not science fiction," Erickson said. "It's there. We just have to do it."

Six years after Weir started his book, one possible inaccuracy shines through it and the movie: Data from Curiosity have suggested that producing water on Mars might not be as arduous as it is for Watney.