Could life exist on these worlds? Could humans manage to survive on them?

Last week brought some crushing news for all the exoplanet enthusiasts out there: Kepler-438b, officially the most Earth-like exoplanet discovered so far, is actually an irradiated wasteland — meaning the chances it could sustain life of any kind are practically zero.

I know it sucks. But we should look on the bright side: According to the Planetary Habitability Laboratory at the University of Puerto Rica at Arecibo, there are actually 30 other potentially habitable exoplanets. Some of those are close to Earth’s size; many are much larger. And none of them is remotely like Earth. If there’s life on those planets, it’s probably just surface microbes that still have a few billion years of evolving to do. For humans to survive on those worlds, they’ll need a lot of new technology that hasn’t been invented yet, as well as a little bit of luck.

Exoplanet researchers use something called the Earth Similarity Index to determine how closely an exoplanet or other object in space (like a moon, dwarf planet, or asteroid) resembles Earth. Each object is given a rating on a scale of zero to one (with one being Earth) that takes into account a planet’s size, density, escape velocity, and surface temperature. We have a lot more to learn about all of them — and like Kepler-438b, many will turn out to have simply been a tease, but here are the five most habitable exoplanets we know about so far, according to their ESI ranking. Humans had better snatch up these properties soon before someone else does.

Just a mere 23.62 light years away, Gilese 667Cc is floating around in a triple star system in the constellation Scorpius. Discovered in 2011, scientists think the exoplanet receives about 90 percent of the light that Earth does, but that’s not the full story…

Gilese 667Cc’s star is an M class star — a red little thing that burns about 2,200 degrees Celsius less than our own G class sun. Much of what would get to the exoplanet is infrared light. Translation: Gilese 667Cc only gets about 20 percent of the visible light Earth does — making it a much darker and colder planet.

By no means, however, does that mean it’s too cold. In fact, Gilese 667Cc seems to get a little more electromagnetic radiation than Earth, so it’s actually a little hotter. Plants won’t grow super well due to a lack in visible light, but some hardy vegetables that prefer the shade might do well. For now, it doesn’t seem to have a dangerous atmosphere. Its mass is estimated to be about 3.8 times that of Earth’s. 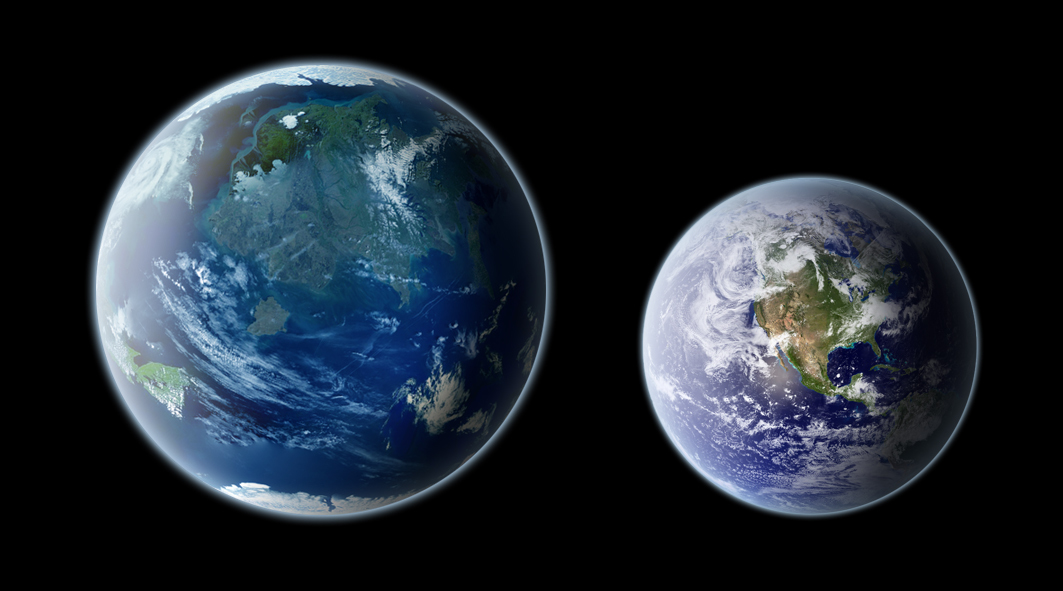 The crucial difference between this exoplanet and GJ 667Cc here is in the stars. Kepler-442b has a K class star, which is just about 750 degrees Celsius colder than the sun (though it will probably live longer), and smaller too. That might be cause for concern, smaller stars sometimes produce stronger solar winds, and so if Kepler-442 doesn’t have a good magnetic field to shield itself from all of that violent energy, there’s no chance it could sustain life.

However, if the star turns out to be stable, this could be a great place to settle down and grow some crops. Physically, Kepler-442b is just 2.34 times the mass of Earth, making the surface gravity 30 percent stronger — which tolerable for humans to get used to.

The biggest mark against Kepler-442b is that it’s 1,120 light years away from Earth, in the constellation Lyra. Anyone moving here shouldn’t plan on having their friends and family over any time soon.

Kepler-62e and Kepler-442b are like siblings. Both orbit K class stars that could give them a high potential for sustaining plant life. Both exist in the constellation Lyra. But there’s kind of where the similarities end. There’s a big chance Kepler-62e could be covered in water-ice — great for anyone that wants to pretend to be living in Kevin Costner’s Waterworld, bad news for anyone who doesn’t like to reenact shitty movies.

The ‘superterran’ exoplanet is about 60 percent larger than Earth, but it’s unclear what the density of planet is, so we can’t yet calculate the mass. Chances are, however, that the planet has a substantially higher gravity than Earth’s.

Most unfortunately, Kepler-62e is more than almost 1,200 light years away from. That’s actually nothing compared to…

A horrendous 1402.5 light years away from Earth, Kepler-452b has one thing going for it no other planet on this list has: a G class star. That might be well worth the trip, since the planet gets 10 percent more energy from its star than we do here from the sun. Vegetation would thrive here. (That’s assuming it has an atmosphere that’d fostered a relatively stable climate, and not a runaway greenhouse effect like we see on Venus).

Still, Kepler-452b has a mass that’s probably five times larger than Earth’s, and a gravity that’s twice as powerful. We’re not even completely sure if it’s a rocky planet — though if it is, it might have some volatile geological activity because of an increased mass and density.

Another one orbiting an M class star, Gliese 832 lives in a neighborhood just 16.2 light years away, in the constellation Grus. It gets approximately the same amount of energy from its star that Earth does from the sun, and its predicted temperature is actually pretty similar to Earth’s — or at least it would if it didn’t have an eccentric orbit that creates potentially drastic temperature swings.

Speaking of which, that orbit is just 36 Earth days, so at least you can enjoy making and breaking New Years resolutions about every five weeks.

Gliese 832’s mass, however is about 5.4 times that of Earth’s. Not much is known about the atmosphere, so gravity notwithstanding, it could be the closest thing Earth has to a long-lost twin — or it could be another beacon of false hope.