February 02, 2016
MANKIND will walk on Mars in less than a decade in humanity's "greatest ever adventure", a space boss has pledged. 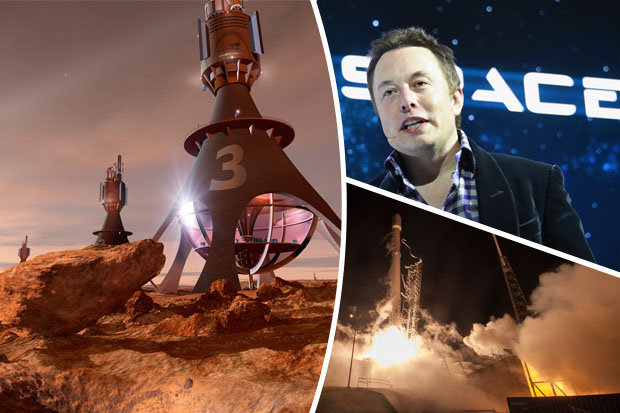 lon Musk, whose company SpaceX builds rockets for NASA, revealed plans for flights to begin to the red planet by 2025.

And he said it offered humans their best shot at building a "self-sustaining city" in an echo of the classic sci-fi film Total Recall.

It comes after the European Space Agency set out plans to build a town on the moon by 2030 as its initial stop on the way to Mars.

Musk revealed the plans at a conference in Hong Kong and said getting people to Mars could prove crucial to our survival.

He said: "It's really a fundamental decision we need to make as a civilisation. What kind of future do we want?

"Do we want a future where we're forever confined to one planet until some eventual extinction event? However far in the future that might occur.

"Or do we want to become a multi-planet species? And then ultimately be out there among the stars and be among many planets and many star systems."

"I think the latter is a far more exciting and more inspiring future than the former," he added.

Musk, who made his billions as boss of web firm PayPal, also spoke of the importance of building a city on Mars.

He has previously suggested nuking the red planet in a bid to make its freezing surface habitable for humans.

"Mars is the next natural step," he said. "In fact, it's the only planet we really have a shot at establishing a self-sustaining city on.

"And I think when we do establish such a city there will be a strong forcing function for the improvement of space flight technology.

"That will then enable us to establish colonies elsewhere in the solar system and ultimately extend beyond our solar system."

The 44-year-old, who is worth $12.4billion, revealed his timeline for putting men on mars at the StartmeupHK Festival.

He told a stunned crowd: "In terms of the first flights to Mars we're hoping to do that in around 2025 – sort of nine years from now, thereabouts."

And he announced he would unveil a next-generation spacecraft capable of doing the job later this year.

He said: "I find what gets me more excited is the fact that this would be an incredible adventure. In fact the greatest adventure ever.

"It would be exciting and inspiring and there need to be things that excite and inspire people.

"Reasons why you get up in the morning can't just be solving problems, it's gotta be something great is going to happen in the future."

But SpaceX is no stranger to setbacks, with the cutting-edge company suffering the sight of a rocket exploding during landing earlier this month.

It was the same fate faced by one of its rockets in April 2015, which came tantalisingly close to landing before tumbling into the sea.

And its Falcon 9 craft blew up en-route to the International Space Station last summer minutes into a flight.

Space bosses in Europe reaffirmed plans to build a moon base using robots and 3D printers at a conference in December.

Material for the construction of the settlement has already been tested and designs of the moon homes published.

SpaceX currently has a $1.6billion contract with NASA to fly resupply missions to the International Space Station.