The pros and cons of propulsive landing

SpaceX's bold plan to put a Dragon spacecraft on Mars in 2018 will rely on a type of landing technique known as propulsive landing — a way of using rocket engines to go down instead of up. As the Dragon descends toward the Martian surface, eight SuperDraco engines embedded in the spacecraft's hull will fire, slowing down the vehicle's descent and allowing it to land gently on the ground.

It's akin to how SpaceX lands the first stages of its Falcon 9 rockets on Earth, and it could be a revolutionary way of landing on Mars. Right now, getting cargo to the Red Planet is an extremely complicated process. The Martian atmosphere is one-hundredth the density of Earth's, providing less cushion to slow down incoming vehicles. In the past, getting hardware to Mars has required complex engineering, using a combination of heat shields, retrorockets, parachutes, and more. Propulsive landings could streamline that process, allowing SpaceX to put large amounts of mass on Mars safely in a less complicated way.

The technique stands in stark contrast to how NASA's Curiosity rover got to Mars in 2012. Its descent to the surface was called the "seven minutes of terror" because a lot of crazy engineering feats had to go right in order for the entire landing to work. The rover entered Mars' atmosphere inside a capsule with a special heat shield attached. Eventually, a parachute deployed to slow the capsule down, and the rover was ejected at a certain altitude. Retrorockets then fired to control the rover's descent and the vehicle was finally lowered down to safety using a "sky crane." All of that was needed to land a rover that weighed just under 2,000 pounds.

The reason the landing became so complex is because NASA's Mars missions are driven by cost and a need to minimize mass, said Bobby Braun, an associate professor of space technology at the Georgia Institute of Technology, who has worked on six NASA landers. NASA tries to save money on its Mars missions by launching them on cheaper, smaller rockets, such as the United Launch Alliance's Atlas V, and the heavier the landing system, the less room there is for scientific instruments. "What that means is you minimize the systems that land the payload," Braun said. Parachutes have been an attractive landing option for NASA, because they're a low-weight method of slowing down vehicles from space. But Curiosity was too heavy to be slowed down by parachutes alone. So NASA came up with a complex system that was light enough to launch from Earth, but robust enough to slow down Curiosity's Martian descent. 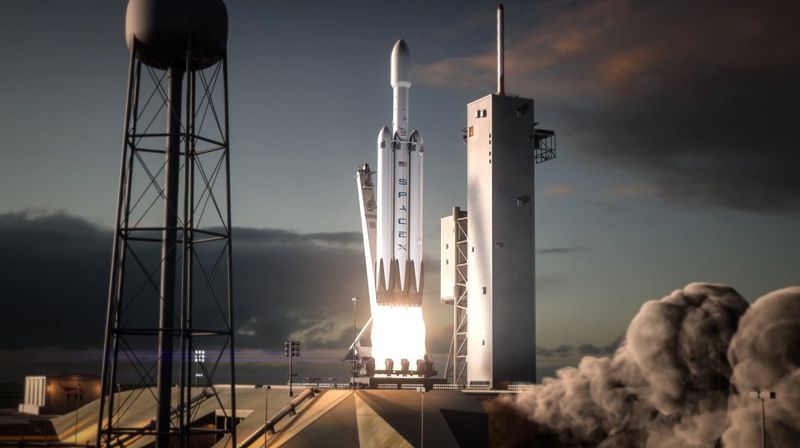 Landing a vehicle propulsively requires a lot more extra weight than previous landing methods, because extra propellant is needed to fuel the engines during descent. But weight won't be as much of an issue for SpaceX, once its Falcon Heavy becomes operational. The Falcon Heavy is a much bigger version of the company's Falcon 9 rocket, which SpaceX says will be able to send more than 29,000 pounds of payload to Mars. The Mars Science Laboratory, which brought Curiosity to Mars, weighed 8,463 pounds, according to NASA. "When [the Falcon Heavy] does fly, we’ll be able to throw a lot more mass to Mars than our current launch vehicles can," said Braun. "Because we can throw a lot more mass, we don’t have to be so mass efficient crazy."

And with SpaceX lowering the cost of making and launching rockets, sending heavier masses to Mars won't necessarily be as expensive as it used to be. SpaceX claims the cost of the Falcon Heavy will start at $90 million. The low-end price of launching an Atlas V is $164 million, according to ULA.

Getting to the ground

The Red Dragon's landing will be way less complex than Curiosity’s. Once it enters the Martian atmosphere, it will mostly just need to fire its engines on the way down to the ground. "It's one phase of flight, one technology," said Braun. "It’s much less complex, and it should be over time much more reliable than the way we do landings now." Braun also said that the system can be scaled up easily, eventually landing up to 20 metric tons on Mars. "Most people think we’re going to need close to 40 to 80 metric tons of payload when we send humans to Mars," said Braun. "Sending that down in 20 metric-ton chunks is a pretty easy way to go."

A crucial part of the Red Dragon missions will be figuring out the right place to land. Using rocket engines to lower a spacecraft down to Mars will likely kick up a bunch of rocks and dust on the surface, which could damage the spacecraft. When Curiosity landed, the retrorockets used to help lower the rover kicked up some debris, damaging one of the vehicle's sensors. "The problem with landing jets is you kick up a lot of stuff," said John Rummel, NASA's former planetary protection officer. SpaceX will need to find a site that poses less risk of damaging the vehicle.

The company will also have to pick a spot that complies with international planetary protection laws. According to the United Nations' Outer Space Treaty, which was ratified in 1967, organizations sending spacecraft to other worlds must avoid contaminating the area. But vehicles that go to Mars often carry thousands of Earth microbes over with them, despite scientists' best sterilization efforts. SpaceX will need to try to pick a place where those microbes will wreak the least havoc on Mars. "It's a pretty cold, dry place, but there are some places on Mars that are warmer and wetter than others," said Rummel. "SpaceX would be well served to not land in one of the places that are potential 'special regions.'" These include the regions on Mars that are thought to have running water. 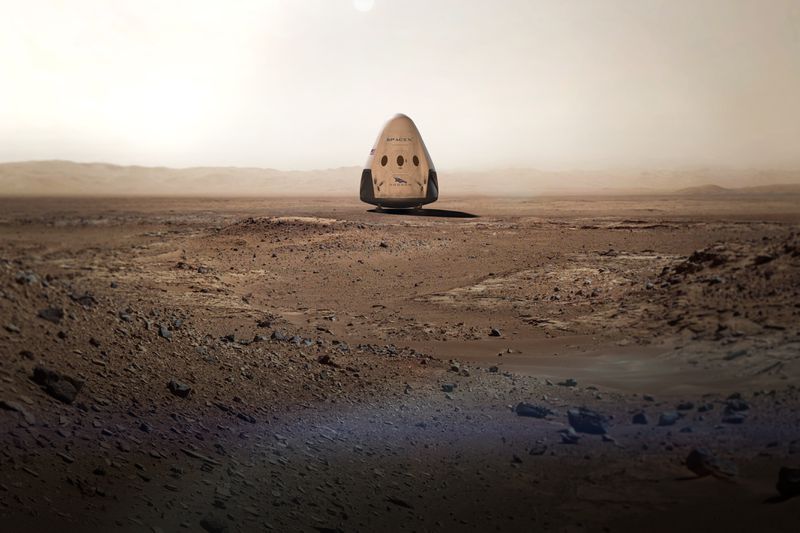 But it's possible the SpaceX's Red Dragon could pose less of a contamination risk than previous spacecraft, according to Rummel. During its trip to Mars, the Curiosity rover was encapsulated by a heat shield, so it was never exposed directly to solar UV radiation en route, Rummel said. If the Red Dragon isn't encapsulated in anything on the ride to Mars, its exterior will be exposed to the sun's UV rays all the way to the planet, which could help destroy lingering Earth microbes. "The nature of that particular vehicle makes it somewhat easier to keep clean and launch in a way that would actually provide you with some additional cleaning on the way to Mars."

SpaceX still has a lot of work to do before it can prove the potential benefits and downsides of its Red Dragon landing approach. The Falcon Heavy still isn't ready, and the company has never landed the Dragon spacecraft using the SuperDraco engines. SpaceX has a complicated road ahead, but if the company pulls it off, the Red Dragon missions could make landing on Mars a lot more simple.