What Will Make Interstellar Travel a Reality?

An $100 million investment is good, but it’s just the beginning. 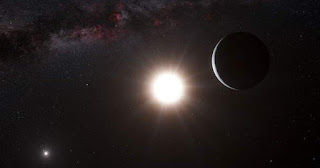 In 1929, a young engineer named Eugen Sänger was living in Vienna and thinking about rockets. In particular, he wondered about using particles of light as spacecraft propellant. A rocket powered by photons, he reasoned, would be extremely fast. It could reach relativistic speeds—at least 10 percent the speed of light and faster—beating, by thousands of times, the capabilities of any other kind of rocket. With this theoretical photon rocket, even large spacecraft could cross the vast distances between stars within a person’s lifetime.

It was a far-out idea that would need huge leaps in technology and significant funding, so Sänger shelved it for a while. But in the 1950s, he began again to puzzle out designs, and in 1960, the Russian popular science journal Priroda (Nature) picked up his concept and published a summary of the hypothetical photon rocket, complete with schematics and a warning. Of major concern: A device that could manage to contain the extremely high-powered energy beam, called a collimator, would need to be made of a material with near perfect efficiency, “otherwise, the energy absorbed by the collimator will instantly turn the vehicle to vapor.”

As we know, photon rockets like Sänger’s remain science fiction. Today, we live in an era dominated by rockets that run on combustible chemicals. There’s nothing that gets us even close to 10 percent the speed of light, or 67 million miles per hour. Using our best current propulsion, it would take about 30,000 years to reach Alpha Centauri, our nearest stellar neighbor—4.37 light-years away. Launching a probe using lasers, however, could get us there in just two decades. It’s compelling math, and it has made Sänger’s theories of photon propulsion an eternally alluring possibility.

And so, in recent years, a handful of researchers and entrepreneurs have seriously revisited the idea, thanks, in part, to the emergence of increasingly powerful lasers. These days, the main approach is to separate the fuel from the rocket: An Earth-based laser array would direct its beam onto a spacecraft, pushing it away at faster and faster speeds.

One popular variation of laser propulsion would use something like a solar sail—a giant light reflector fixed to a spacecraft—nudged along by photon pressure from the sun. But sunshine is to lasers as an April shower is to a fire hose. For speed and efficiency, you want the fire hose.

Over the last few years, NASA has provided small awards to explore the concepts. Young Bae, founder of Y. K. Bae Corp, has won money from the NASA Innovative Advanced Concepts (NIAC) program, and last spring, he released a video demonstrating how a photon thruster would work in the lab.

Philip Lubin, professor of physics at the University of California Santa Barbara, also won NIAC funds to further develop his concept for laser propulsion. Earlier this year, NASA released a widely watched video in which Lubin describes the fundamentals:

Last week, Lubin, Bae, and others presented their latest calculations, lab demonstrations, and proposals for future work in a session at the International High Power Laser Ablation and Directed Energy Symposium in Santa Fe, New Mexico.

Up to this point, though, laser propulsion has been mostly calculations and teasers. Without significant funds, there would be no way to build prototypes, troubleshoot designs, or scale up to a practical system.

But this week, the field got a big jolt: The Breakthrough Foundation announced that science philanthropist Yuri Milner and famed cosmologist Stephen Hawking were backing a laser propulsion system to send very small space probes to Alpha Centauri—hopefully in that estimated 20 years. The initiative, called Breakthrough Starshot, would provide $100 million for working out the technological kinks. Facebook founder Mark Zuckerberg is also on the initiative’s board. Lubin and two dozen others are on the management and advisory committee.

So, is $100 million going to make us an interstellar species?

First, it may sound like a lot of money but in the context of space travel, it’s a drop in the bucket. Consider the Apollo program. Adjusting for inflation, it cost about $200 billion to spin up. This money didn’t just fall from the sky. It was deliberately funneled into a U.S. space program that was born of fear of and competition with the Russians—who were getting there first. The Sputnik satellite in 1957 and the historic orbit of Yuri Gagarin, 55 years ago Tuesday, were major motivating factors, and as a result, government funding for the initiative skyrocketed in a way it hadn’t yet and hasn’t since.

NASA still has a hefty budget, but in recent years it hasn’t been spending it on such lofty goals. The pressures are obviously not the same today, but other forces may be mounting. Russia is also exploring the ideas behind a laser propulsion system for spaceflight via laser-powered satellites and Japan is deploying an orbiting solar farm that could beam energy back to earth. And then there’s China, which has been developing high-powered, laser-based weapons for years.

The designs proposed by Lubin and others could clearly also be weaponized, just as rockets were used as missiles before they transported astronauts into orbit. In fact, Lubin has said that his system could not only accelerate spacecraft to great speeds but could also be used to obliterate dangerous space debris, and deflect incoming asteroids and comets—something called planetary defense. It’s feasible to imagine how it could also be used for warfare right here on our own planet.

That Lubin’s laser propulsion system has multiple applications holds great appeal: It provides even more reason to build and test the basic infrastructure. But going interstellar won’t be easy—that’s why Lubin developed a roadmap that starts the project small. One growth trajectory he’s proposed would begin with a small laser array on the International Space Station to shoot down space debris. Then, as the technologies mature, the goals would shift to building a larger laser array that could propel spacecraft of various sizes to relativistic speeds.

The smaller probes are the ones that could get to Alpha Centauri in less than 20 years. (Another potential application is human transport. It’s true that the smaller the craft, the faster it goes, but the concept scales to handle larger crafts as well. Lubin says that this sort of system could be used to shuttle people between Mars, although at much reduced speeds because extreme acceleration is hard on a soft body. He’s quick to point out that the required setup—where one laser is on Earth and another is on Mars, both managing the speed of the shuttle to and fro—would be a “formidable project” and probably wouldn’t happen for another hundred years.)

The Breakthrough Starshot directly leverages Lubin’s roadmap and makes its main goal to deploy ultra-small spacecraft the size of postage stamps to Alpha Centauri. These tiny crafts, called StarChips, play to the economic forces at work in the electronics industry: Moore’s Law—the trend that makes computing power on mobile phones more powerful with each generation; and economies of scale—which allows the price of high-volume goods to be relatively low. What this means is that capabilities of such small crafts will likely continue to improve, and once an infrastructure to launch them is in place, the cost of building and deploying new crafts would be minimal.

Similar concepts apply to laser technology. Just as supercomputers are made of millions of modestly powered computing cores synchronized to perform enormous calculations, the world’s most powerful lasers are made of components from smaller, less powerful lasers. These components are “phase locked,” which effectively synchronizes their energy, so that they produce a single, coherent, high-powered beam with the potential to blast out 100 gigawatts of light. By comparison, your laser pointer, which can cause significant damage to your eyes and temporarily blind pilots in planes, is restricted to a trillionth of the power at 5 milliwatts.

The Breakthrough Starshot’s $100 million would help research teams build prototypes. It would also help research teams tackle potential problems, of which there are many (even though most agree that the physics of such systems are sound). The technological challenges range from building a steady beam that can find the StarChips’ light sails without obliterating the crafts (vaporization is still an issue), to designing robust, highly reflective light sails, to building StarChips that can function well a long way from home, to avoiding interstellar dust collisions en route, to receiving and making sense of the data—images, for instance—sent back to Earth.

So is the $100 million going to get us to Alpha Centauri? It would be impossible for that sum of money alone to be enough to build and launch a fully functional fleet of tiny interstellar spacecraft. The Breakthrough Foundation doesn’t deny it. But the funding goes a long way toward enhancing legitimacy of a concept that’s been fledgling for a century. To truly kick laser propulsion funding into high gear, though, it would require a vast amount more money, coupled with doubled-down attention to the matter. And what would cause that? Most likely, some kind of threat—the more immediate, unfortunately, the better. An asteroid from outer space, perhaps, or an international neighbor with a laser system too impressive to ignore might do the trick. It’s better—if not entirely practical—to hope for enough billionaires who have aspirations for the stars.