On Tuesday, NASA announced the Kepler space telescope's discovery of 1,284 planets outside of our solar system, more than doubling the number of known Kepler exoplanets. This brings the tally up to 2,325.
More than 100 of the new planets are 1.2 Earth masses or smaller and are "almost certainly rocky in nature."

Of all the new planets, 550 are small and possibly rocky, and nine of them reside in the habitable zone, which could potentially support life.

"We are sampling the galaxy to understand how many planets there are and how far out we have to search in order to find potentially habitable planets like Earth," Natalie Batalha, the Kepler mission scientist at NASA's Ames Research Center, said in the announcement.

The Kepler space telescope is a space observatory launched in 2009 with the mission of finding Earth-size planets in areas that could potentially support life.

The telescope searches for the faint dimming that occurs when a planet crosses the path of one of those stars. The goal of this is to identify possible exoplanets that are Earth-size or larger and are in zones favorable to life.

The new findings more than double the number of previously known exoplanets. 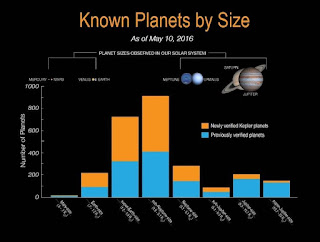 Since its launch, Kepler has helped astronomers confirm the existence of more than 1,000 exoplanets, or planets outside of our solar system. Astronomers now believe that, on average, there may be at least one planet orbiting every star in the sky.

In the 2009 mission, Kepler, which makes a complete journey around the sun every 371 days, constantly shifted its gaze as it orbited in order to stayed fixed on a single section of the sky. This allowed it to monitor roughly 150,000 stars for years at a time.


In 2014, NASA started K2, a follow-up to the 2009 Kepler mission, to continue the search for exoplanets while also studying supernovae, comets, asteroids, and other cosmic phenomena using Kepler. While the original Kepler mission required the telescope to remain fixed on one, unchanging portion of the sky, in K2 its field of view sweeps a band across the entire sky, pointing to a new portion every 80 days, Time reports.

Of the thousands of candidates NASA found this round, which looks at data from the original Kepler mission, a whopping 1,284 have been confirmed. They're shown in the pie chart below in orange: 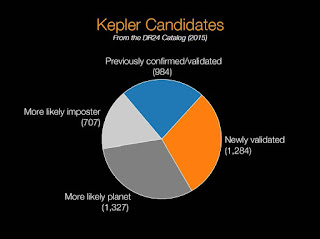 Here's a look at all of the planets in the habitable zone — shown below in green — which could potentially support life: 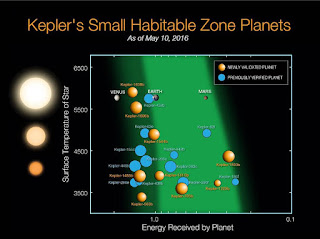 "We're going to change the way you see the universe," Batalha said. "When you look up at the sky, you won't just see pinpoints as stars. You'll see them as planetary systems. You'll look up at a point of light and say that star has a living world orbiting it."