June 27, 2016
A massive fireball will light up the northern Utah town of Promontory Tuesday as NASA tests its SLS rocket booster. 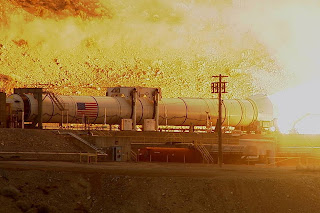 It's going to be scorching hot in northern Utah on Tuesday as NASA tests a booster for its powerful Space Launch System (SLS).

The SLS is the world's most powerful rocket, and will lift NASA's deep-space Orion crew vehicle into space, carrying astronauts to destinations like Mars and near-Earth asteroids. Last year, it fired up the SLS booster for the very first time, producing 3.6 million pounds of thrust (and a massive fireball) in two minutes of awesome; check it out in the video below.

Now it's ready for test No. 2 at a facility owned by commercial partner Orbital ATK in Promontory, Utah. Watch live on NASA TV at 10:05 a.m. EDT Tuesday morning. A pre-show begins at 9:30 a.m. and a post-test news conference is scheduled for 11 a.m. A live video stream is embedded below.

"In 2015, NASA completed the critical design review – a first for a NASA exploration class vehicle in almost 40 years—and continues to move forward with production of the launch vehicle," NASA says on its SLS site. "Engineers are making rapid progress aimed toward delivering the first SLS rocket to NASA's Kennedy Space Center in Florida for its first launch. Flight hardware is currently in production for every element."

After tomorrow, NASA will not fire the booster against until 2018, when it's strapped to the Orion spacecraft for what will be known as Exploration Mission-1 (EM-1). That mission, which will journey "thousands of miles beyond the moon" during its three-week mission, will not have humans onboard, but "but it paves the way for future missions with astronauts."

"This is a mission that truly will do what hasn't been done and learn what isn't known," Mike Sarafin, EM-1 mission manager at NASA Headquarters said in November. "It will blaze a trail that people will follow on the next Orion flight, pushing the edges of the envelope to prepare for that mission."