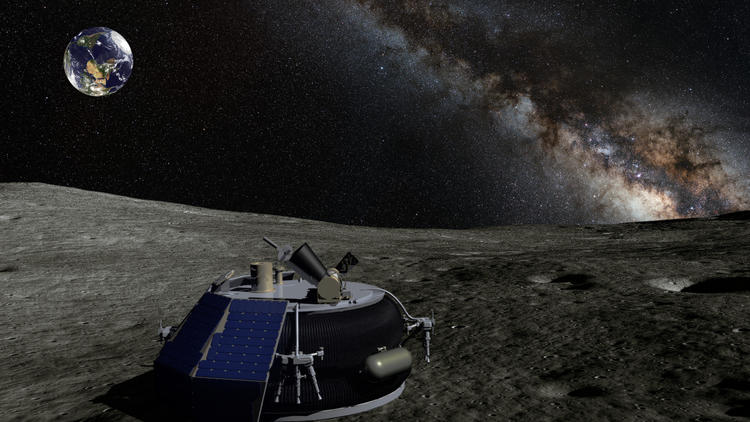 A commercial space company could be one step closer to landing its spacecraft on the moon in a regulatory move that might help open space exploration beyond Earth orbit to private firms.

The Wall Street Journal reported Sunday that U.S. regulators were set to give “mission approval” to Mountain View, Calif., company Moon Express to land its MX-1 lander on the moon and to conduct a two-week operation. Previously, only nations have launched missions beyond Earth orbit.

The Journal said official action coordinated through the Federal Aviation Administration, which licenses and approves all commercial rocket launches, could come in the next few weeks.

Moon Express issued a statement that it could not elaborate on the “groundbreaking developments,” but that the company was “very optimistic” about its proposal.

The MX-1 lander, which Moon Express said is capable of carrying scientific and commercial payloads, is set to blast off in 2017 on Los Angeles-based Rocket Lab’s Electron rocket. The rocket is awaiting its first flight.

In a video posted on its website, Moon Express said it would start by launching robotic landers with payloads to the surface of the moon and progress to exploring for resources, learning how to process the materials, and transporting them back to Earth.

Moon Express has said it is looking for platinum group metals, rare earth elements and Helium-3, which some believe could be a safer nuclear fuel and is present in larger quantities on the moon, according to the European Space Agency.

Other companies, such as Planetary Resources, are looking to asteroids as potential sources of platinum exceeding that which can be found on Earth. The Redmond, Wash., company is also looking to harvest water from asteroids and break it down to create rocket fuel.

While private companies such as SpaceX have already upended the traditional launch market by offering cheaper prices than longstanding aerospace firms, outer space, including celestial bodies like the moon and Mars, is a different and more difficult matter.

For one thing, a mission like that of Moon Express is subject to the Outer Space Treaty of 1967, an international regulatory agreement initiated by the U.S. and Russia.

The treaty mandates that the moon and other celestial bodies be used only for peaceful purposes and not for testing weapons of any kind. It also states that nongovernmental entities must get approval from a particular country for activities in outer space.

Since all prior commercial activity has been in Earth orbit, Moon Express’ plan presents a new challenge for licensing and regulatory processes, said Mariel Borowitz, assistant professor in the Sam Nunn School of International Affairs at the Georgia Institute of Technology. She said the potential approval for Moon Express could provide a framework for future licensing of private space activity such as SpaceX’s plans to go to Mars in 2018.

“Moon Express, I think, is paving the way for commercial activity outside of Earth orbit,” Borowitz said.

In a statement, the FAA said it is working through the inter-agency process to ensure a “mechanism is in place that permits emerging commercial space operations, such as the one that Moon Express has publicly commented on.”

Though several companies dedicated to moon mining and asteroid mining have cropped up over the last five years, they have gained little traction in part because of the expense, said Marco Caceres, senior space analyst at the Teal Group, an aerospace and defense analysis company.

“It’s a huge undertaking,” he said. “And a normal private company really doesn’t have the money to do that sort of thing.”

But, he said, the activity surrounding Moon Express indicates the growth of the commercial space industry.

“These are pioneers,” Caceres said. “It might jump-start an industry. It may do nothing because it’s so hard that only that company can do it. It really just takes that first company to be successful.”