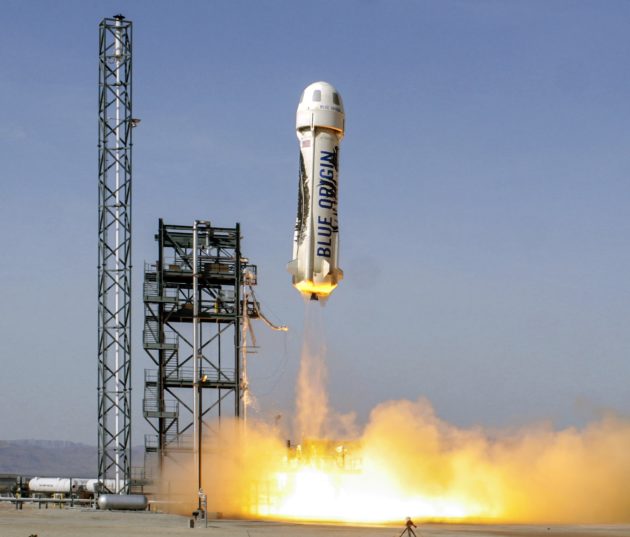 Blue Origin, the space venture founded by Amazon billionaire Jeff Bezos, plans to accelerate its current once-every-eight-weeks schedule for flight tests of its New Shepard suborbital spaceship, leading up to the first crewed flights next year, one of the company’s executives said today.

The variety of scientific experiments being flown on the flights will also widen, according to Erika Wagner, Blue Origin’s business development manager. Wagner provided a glimpse of the road ahead for the New Shepard program at the International Space Station Research and Development Conference, which is under way this week in San Diego.

The New Shepard spacecraft was built at Blue Origin’s headquarters in Kent, Wash., but it’s undergoing testing at the company’s West Texas launch site. The reusable, hydrogen-fueled craft already has made four successful uncrewed flights to the edge of outer space and back, including two missions that carried research payloads.

Wagner told the San Diego audience that Blue Origin’s payload manifest has been planned out for the next year, and would add biology experiments to the mix. The team is also looking at ways to modify the spacecraft so that experiments can be exposed to the space environment, rather than staying inside the pressurized New Shepard capsule throughout the flight, she said.

Wagner indicated that the New Shepard program was on track to start carrying test astronauts on autonomous flights next year. She said such flights would last 11 minutes, including about three and half minutes of “really clean” microgravity and views through some of the largest windows ever installed in a spaceship (measuring 42.7 inches high).

The plan calls for New Shepard to start commercial operations in 2018, and send up to six passengers to space and back during each flight. Pricing for the flights has not yet been announced, but student research payloads can be flown for as little as $5,300.

Wagner said the suborbital space program was part of Blue Origin’s long-term strategy of having millions of people living and working in space. “For us, success is people starting to make money on the back of our platform,” she said.

Other parts of the strategy include Blue Origin’s work on its BE-4 rocket engine, which is being considered for use on United Launch Alliance’s next-generation Vulcan rocket; and on an orbital space vehicle that would be built at the company’s Florida facility, currently under construction.

Bezos is putting more than half a billion dollars into Blue Origin from his personal fortune, rather than from Amazon. Nevertheless, Wagner couldn’t resist making a connection during her San Diego talk. “While you’re doing your Prime Day shopping today, I thank you,” she joked.

Blue Origin isn’t the only suborbital space venture aiming to capitalize on space tourism as well as research work. Virgin Galactic’s SpaceShipTwo program is aiming for a similar market. So far, about 700 customers have paid as much as $250,000 a ticket for a trip to space.

Those would be the first rocket-powered SpaceShipTwo flights since the first rocket plane in the series, VSS Enterprise, broke up during flight. That accident killed the plane’s co-pilot and seriously injured the pilot. Virgin Galactic made changes in the plane’s design and training routine to respond to issues raised by the National Transportation Safety Board’s investigation of the tragedy.

XCOR Aerospace is also working on a suborbital rocket plane capable of reaching the edge of outer space. The Texas-based company recently announced some layoffs and shifted the focus of its work from its Lynx plane to rocket engine development. But today, XCOR said it was partnering with Scotland-based Orbital Access and Glasgow Prestwick Airport to establish launch services at Prestwick.