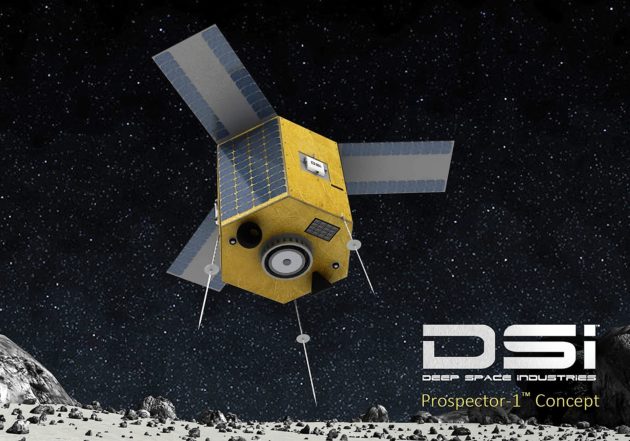 One of the two big players in the asteroid mining market, Deep Space Industries, today unveiled its plan to land a 110-pound spacecraft on a near-Earth asteroid by 2020.

The spacecraft, known as Prospector-1, would study the yet-to-be-selected asteroid to determine the value of its resources for mining. It’ll also put Deep Space Industries’ water-based propulsion system to an interplanetary test.

“Deep Space Industries has worked diligently to get to this point, and now we can say with confidence that we have the right technology, the right team and the right plan to execute this historic mission,” Rick Tumlinson, DSI’s board chairman and co-founder, said in a news release.

California-based DSI and its partners in Luxembourg say they’ll launch a precursor satellite called Prospector-X into low Earth orbit next year to test the technologies that would be used for Prospector-1.

DSI sees near-Earth asteroids as potentially valuable sources for materials ranging from plain old water ice – which can be processed into breathable oxygen and drinkable water as well as propellant – to in-space building materials and precious metals.

If DSI sticks to its schedule, Prospector-1 could become the first commercial asteroid mining exploration mission. However, Planetary Resources, which is based in Redmond, Wash., is also taking aim at asteroids.

Planetary Resources had its first precursor spacecraft, Arkyd-3R, deployed into orbit for a five-month test mission last year. A larger spacecraft, the Arkyd-6A, is being readied for launch later this year and will observe Earth in infrared wavelengths as a practice round for asteroid prospecting.

Planetary Resources says its next-generation space telescopes, known as the Arkyd 100 and Arkyd 200, could start studying the composition of near-Earth asteroids in the 2017-2019 time frame. At the same time, the company plans to create a constellation of Earth-observing satellites known as Ceres.

If suitable targets are identified, Planetary Resources could begin extracting materials from asteroids by the mid-2020s, according to the company’s president and CEO, Chris Lewicki.

Planetary Resources has raised tens of millions of dollars since its founding in 2012. Deep Space Industries was founded a year later, and has raised an undisclosed amount of seed money from investors including Metatron Global. Both companies have forged partnerships with Luxembourg’s government as part of that European nation’s SpaceResources.lu initiative.

DSI’s spacecraft will use an experimental water-based propulsion system that’s been dubbed Comet. The system is designed to generate thrust by expeling superheated water vapor.

The mission plan for Prospector-1 calls for selecting a promising asteroid and sending out the 110-pound (50-kilogram) spacecraft for a rendezvous beyond Earth orbit. The solar-powered probe would map the asteroid’s surface and subsurface composition using visual and infrared imagery as well as readings from a neutron spectrometer. 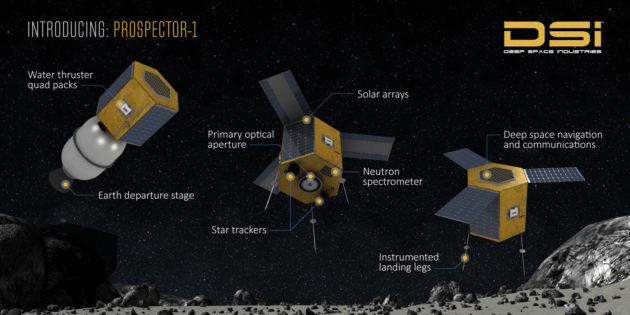 After the scientific mapping mission, the probe would touch down on the surface and conduct further measurements.

“The ability to locate, travel to and analyze potentially rick supplies of space resources is critical to our plans,” Daniel Faber, the CEO of Deep Space Industries, said in today’s release. “This means not just looking at the target, but actually making contact.”

DSI plans to have its spacecraft refuel themselves using water ice from the asteroids they study. “By learning to ‘live off the land’ in space, Deep Space Industires is ushering in a new era of unlimited economic expansion,” Tumlinson said.