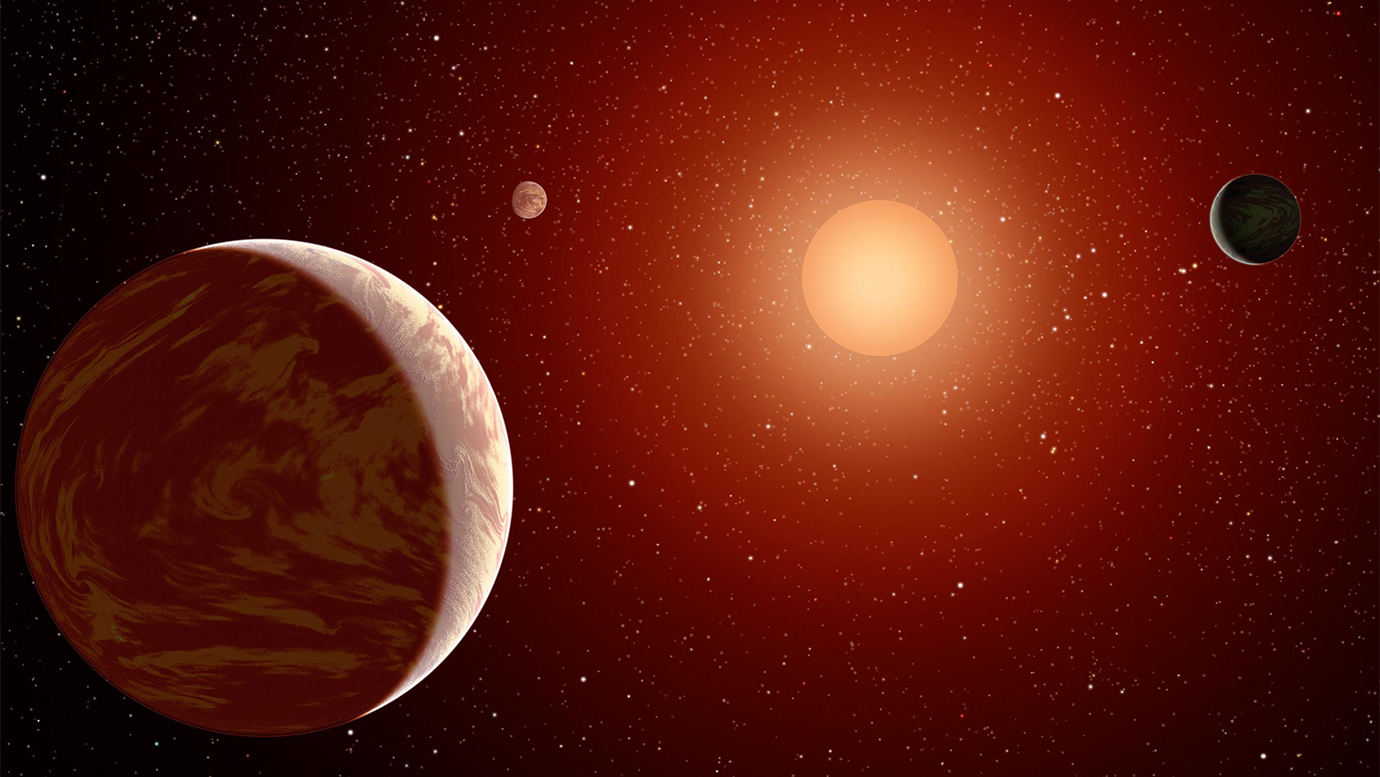 The TRAPPIST-1 star system houses three planets, which have now been confirmed to be Earth-sized and possibly rocky.

For astronomers to determine the size of an exoplanet—planets outside the solar system—depends critically on knowing not only the radius of its host star but also whether that star is single or has a close companion. Consider that about half of the stars in the sky are not one but two stars orbiting around each other, this makes knowing the binary property of a star paramount.

One particularly interesting and relatively nearby star, named TRAPPIST-1, recently caught the attention of a team of researchers. They wanted to determine if TRAPPIST-1, which is home to three small, potentially rocky planets—one of which orbits in the temperate habitable zone where liquid water might pool on the surface—was a single star like the sun, or if it had a companion star. If TRAPPIST-1 did have a companion star, the discovered planets will have larger sizes, possibly large enough to be ice giants similar to Neptune.

"Knowing that a terrestrial-size potentially rocky planet orbits in the habitable zone of a star only 40 light-years from the Earth is an awesome finding."
- Steve Howell, NASA

If an exoplanet orbits a star in a binary system but astronomers believe the starlight captured by the telescope is from a single star, the real radius of the planet will be larger than measured. The difference in the measured size of the exoplanet can be small ranging from 10 percent to more than a factor of two in size, depending on the brightness of the companion star in the system.

To confirm or deny the single star nature of TRAPPIST-1, Steve Howell, senior research scientist at NASA's Ames Research Center at Moffett Field, California, led an investigation of the star. Using a specially designed camera, called the Differential Speckle Survey Instrument or DSSI, Howell and his team measured the rapid disturbances in the light emitted by the star caused by the Earth’s atmosphere and corrected for them. The resultant high-resolution image revealed that the light coming from the TRAPPIST-1 system is from a single star.

With the confirmation that no other companion star resides in the vicinity of TRAPPIST-1, the research team's result validates not only that transiting planets are responsible for the periodic dips seen in the star’s brightness but that they are indeed Earth-size and may likely to be rocky worlds.

"Knowing that a terrestrial-size potentially rocky planet orbits in the habitable zone of a star only 40 light-years from the Earth is an awesome finding," said Howell. “The TRAPPIST-1 system will continue to be studied in great detail as these transiting exoplanets offer one of the best chances to characterize the atmosphere of an alien world."

Mounted on the 8-meter Gemini Observatory South telescope in Chile, the DSSI provided astronomers with the highest resolution images available today from a single ground-based telescope. The nearness of TRAPPIST-1 allowed astronomers to peer deep into the system, looking closer than Mercury's orbit to our sun.

The paper the result is based on is published in the September 13th issue of The Astrophysical Journal Letters.

Interest in the recently-discovered TRAPPIST-1 with its three Earth-size planets is high. Astronomically speaking, at 40 light-years from Earth, the system is a hop, skip and a jump away. The star itself is a dim M-type star, which, relative to most stars, is very small and cool, but making transit detection of small planets easier.

Further detailed measurement of the planetary transits seen in TRAPPIST-1 will begin later this year when NASA's Kepler space telescope in its K2 mission will precisely monitor minute changes in the light emitted from the star for a period of about 75 days.

The space-based observations from the Kepler spacecraft will provide extremely precise measurements of the planet transit shapes allowing for more refined radius and orbital period determination. Noting variations in the mid-time of the transit events can also help astronomers determine the planet masses. Additionally, the new observations will be searched for more transiting planets in the TRAPPIST-1 system.

Speckle interferometry, the imaging technique used by the DSSI, is a powerful asset in the astronomer's toolkit as it provides a unique capability to characterize the environment around distant stars. The technique provides ultra high-resolution images by taking multiple extremely short (40-60 millisecond) exposures of a star to capture fine detail in the received light and “freeze” the turbulence caused by Earth’s atmosphere.

By combining the many thousands of exposures and using mathematical techniques to remove the momentary distortions caused by Earth’s atmosphere, the final result provides a resolution equal to the theoretical limit of what the 8-meter Gemini telescope would produce if no atmosphere were present.

Howell and his team at NASA Ames are currently undertaking the construction of two new speckle interferometric instruments. One of the new instruments will be delivered this fall to the 3.5-meter WIYN telescope located at Kitt Peak National Observatory outside of Tucson, Arizona, where it will be used by the NN_EXPLORE guest observer research program. The other is being developed for the Gemini Observatory North telescope located on Mauna Kea in Hawaii.

To learn more about the result from the Gemini Observatory, visit:

For more information on the Kepler and the K2 mission, visit: