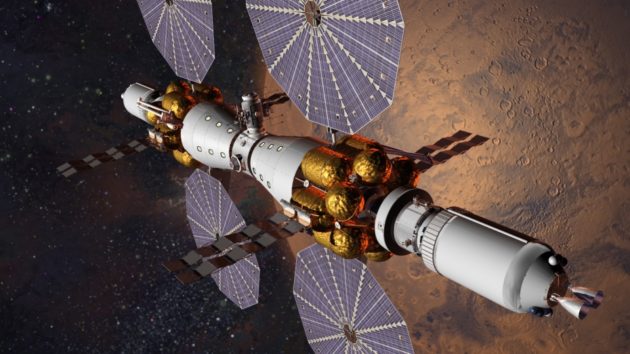 President Barack Obama is throwing a spotlight on NASA’s plan for Mars exploration – and habitation – in advance of this week’s White House-backed conference on the frontiers of technology.

“We have set a clear goal vital to the next chapter of America’s story in space: sending humans to Mars by the 2030s and returning them safely to Earth, with the ultimate ambition to one day remain there for an extended time,” Obama said in an essay published today on CNN.com.

The president’s space vision statement comes in the wake of SpaceX billionaire founder Elon Musk’s unveiling of a plan that could theoretically put settlers on Mars before NASA astronauts get there.

That plan calls for building giant rockets over the next decade that could start trips to Mars in the mid-2020s. It’s not exactly clear how Obama’s vision meshes with Musk’s, but they could conceivably be compatible.

Today Obama highlighted NASA’s recently announced initiative to support the development of deep-space habitats suitable for trips to Mars. That initiative, known as NextSTEP-2, sets aside $65 million over the next two years for six companies to develop on-the-ground habitat prototypes.

Obama also called attention to the efforts by Boeing and SpaceX to build space taxis for astronauts’ trips to and from the International Space Station. Those taxis could be flying as soon as 2018.

The president didn’t specifically mention NASA’s own multibillion-dollar rocket development program, known as the Space Launch System. That’s the launch system that NASA currently expects to use to send payloads and people to Mars.

In a NASA blog item that fills in some of the details of Obama’s vision statement, White House science adviser John Holdren and NASA Administrator Charles Bolden similarly talked up space commercialization and habitat development, but made no mention of the Space Launch System.

Bolden has highlighted SLS as well as NASA’s Orion deep-space capsule in previous statements about NASA’s “Journey to Mars,” so the fact that those programs weren’t mentioned today shouldn’t be seen as a sign that the Orion-SLS program is in trouble.

However, the fact that so much attention was devoted to commercial space efforts in today’s statements serves as a strong signal that the Obama administration, at least, is open to private-public partnerships for Mars exploration – and even settlement.

Obama recalled how he sat on the shoulders of his grandfather as a child, watching as the Apollo astronauts were welcomed back to Hawaii after their missions to the moon.

“Someday, I hope to hoist my own grandchildren onto my shoulders,” Obama wrote. “We’ll still look to the stars in wonder, as humans have since the beginning of time. But instead of eagerly awaiting the return of our intrepid explorers, we’ll know that because of the choices we make now, they’ve gone to space not just to visit, but to stay – and in doing so, to make our lives better here on Earth.”