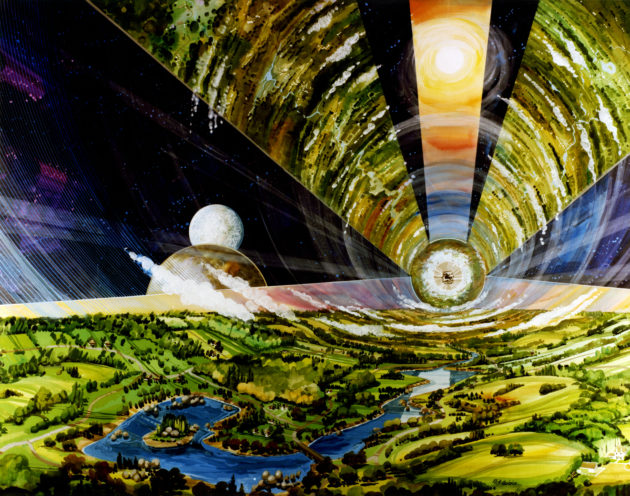 SpaceX’s Elon Musk wants to settle humans on Mars. Others talk about a Moon Village. But Seattle billionaire Jeff Bezos has a different kind of off-Earth home in mind when he talks about having millions of people living and working in space.

His long-range vision focuses on a decades-old concept for huge artificial habitats that are best known today as O’Neill cylinders.

The concept was laid out in 1976 in a classic book by physicist Gerard O’Neill, titled “The High Frontier.” The idea is to create cylinder-shaped structures in outer space, and give them enough of a spin that residents on the inner surface of the cylinder could live their lives in Earth-style gravity. The habitat’s interior would be illuminated either by reflected sunlight or sunlike artificial light.

O’Neill cylinders and their ilk have become a standby for hard science-fiction stories. For example, in Kim Stanley Robinson’s “2312,” hollowed-out asteroids known as “terraria” house communities that travel back and forth between planets. In the movie “Interstellar,” Matthew McConaghey’s character finds himself inside an O’Neill-type outpost named Cooper Station near Saturn.

Bezos is said to have talked up the concept in the 1980s, when he was a starry-eyed student at Princeton. Three decades later, he’s the CEO of Amazon with a net worth estimated at $67 billion, and with his own space venture called Blue Origin.

During last weekend’s Pathfinder Awards banquet at Seattle’s Museum of Flight, Bezos referred to his long-term goal of having millions of people living and working in space, as well as his enabling goal of creating the “heavy lifting infrastructure” to make that happen.

In Bezos’ view, dramatically reducing the cost of access to space is a key step toward those goals.

“Then we get to see Gerard O’Neill’s ideas start to come to life, and many of the other ideas from science fiction,” Bezos said. “The dreamers come first. It’s always the science-fiction guys: They think of everything first, and then the builders come along and they make it happen. But it takes time.”

For Musk, the prime driver behind settling people on Mars is to provide a backup plan for humanity in the event of a planetwide catastrophe – an asteroid strike, for example, or environmental ruin, or a species-killing pandemic. Bezos sees a different imperative at work: humanity’s growing need for energy.

“We need to go into space if we want to continue growing civilization,” he explained. “If you take baseline energy usage on Earth and compound it at just 3 percent per year for less than 500 years, you have to cover the entire surface of the Earth in solar cells. That’s just not going to happen.”

Some might say the limits to growth will force civilization into a static condition, but Bezos sees space industry as the frontier for continued growth.

“I predict that in the next few hundred years, all heavy industry will move off planet. It will be just way more convenient to do it in space, where you have better access to resources, better access to 24/7 solar power,” he said last weekend. “Solar power on Earth is not that great, because the planet shades us half the time. In space, you get solar power all the time. So there’ll be a lot of advantages to doing heavy manufacturing there, and Earth will end up zoned residential and light industry.”

The way Bezos sees it, in-space power generation and manufacturing is the answer, rather than sending a million people to Mars.

Hundreds of years from now, will Bezos’ strategy win out, or will Musk’s? Both, or neither? It may seem airy-fairy to even consider the question – until you realize that hundreds of millions of dollars are being spent right now to turn those science-fiction visions into realities.