How will we get to Alpha Centauri? Researchers work on an antimatter drive 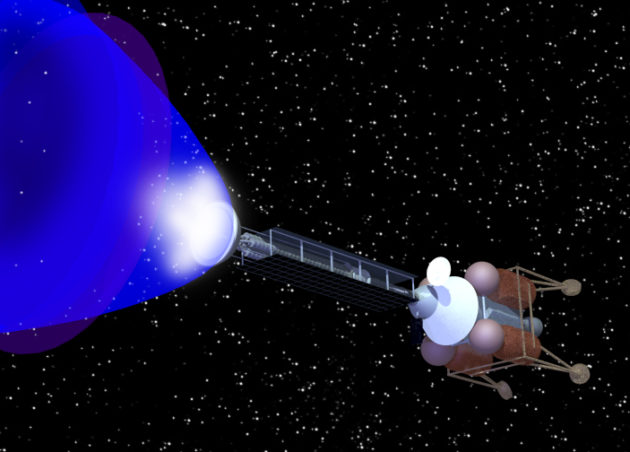 Project Blue’s scientists still have to raise more than $800,000 over the next 15 days to reach their initial crowdfunding goal for a mission to observe Alpha Centauri’s alien planets, but they’re already thinking about how future explorers could get there.

It would take tens of thousands of years to make the 4.37-light-year trip using the best rocket propulsion that’s available today.

But a video created by Speculative Films, with input from Project Blue as well as Positron Dynamics, focuses on how antimatter propulsion could reduce that travel time to 40 years.

Antimatter drives have been a science-fiction standby since the original “Star Trek” TV series. They’ve also been the subject of real-world research. Almost two decades ago, researchers were talking with NASA about an antimatter-driven sail that could send a spacecraft to Alpha Centauri in the 40-year time frame.

Positron Dynamics’ concept calls for cooling down a stream of positrons — the antimatter equivalent of electrons — and smashing them into a stream of electrons. Theoretically, that could produce enough oomph to accelerate a probe to more than one-tenth of the speed of light.

“There are some challenges — you know, radiation — but we think the engineering constraints are within limits of feasibility,” CEO Ryan Weed said.

Meanwhile, the Breakthrough Starshot project is working on a laser-driven propulsion system that could send cracker-sized probes past Alpha Centauri after a 20-year cruise.

A report drawn up by U.S. Rep. John Culberson, R-Texas, calls on NASA to study the feasibility of launching a mission to Alpha Centauri, one way or the other, by the centennial of the Apollo 11 moon landing in 2069.

Last week, Culberson told ScienceInsider that he’s been talking with President-elect Donald Trump’s transition team about the need to make sure “that it will be an American spacecraft that discovers life on another world, and achieves interstellar travel, and explores an Earthlike planet around a nearby star.”

“There’s lots of support for that in the incoming Congress and in the new administration,” he said.

The technical challenges seem daunting, and even if the antimatter drives or laser-beaming antennas become realities, a mission to Alpha Centauri would cost billions of dollars. Is the trip worth the cost? It just might be, if Project Blue’s telescope really does detect signs of life on the worlds in Alpha Centauri’s neighborhood.