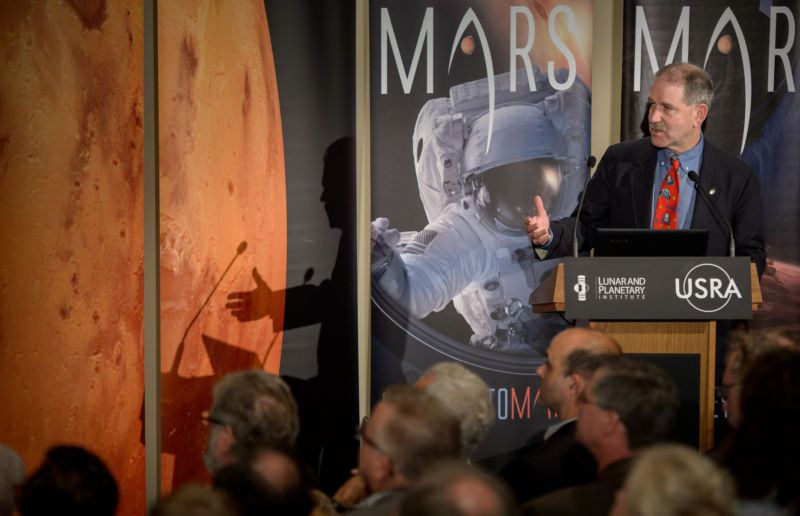 NASA’s Asteroid Redirect Mission has always been a bit of an ugly duckling. It was not out of love that the space agency came up with the plan to scoop a small boulder off the surface of an asteroid and bring it back to a location near the Moon. Rather, after President Obama’s call to have humans visit an asteroid in the mid-2020s, this was the only way NASA could afford to meet such a mandate.

Since the mission’s formulation, Congress has generally dismissed sending astronauts to fly formation with a small boulder around the Moon as a stunt. Many planetary scientists, too, have never really embraced the plan, uncertain of its value when NASA already was flying a robotic sample return mission to an asteroid, OSIRIS-REx.

The aerospace community generally believes the Trump administration will sweep aside the asteroid mission in the coming months. Further confirmation of this came in late November from House Science Committee chairman and Trump ally Lamar Smith (R-Tex.), who sent a letter to NASA Administrator Charles Bolden asking critical questions about the mission, claiming it was “thrust upon NASA” by the Obama administration and was supported by “farcical studies.”

Even within NASA, support for the mission has been mixed. During the years of the mission’s development, from 2012 to 2016, former astronaut John Grunsfeld led the space agency’s science mission directorate. Although not openly critical of the asteroid mission during his time at the space agency, since leaving NASA the five-time astronaut has promoted a dramatic alternative that would align with the agency’s goal of eventually sending humans to Mars. The plan, which would likely use SpaceX’s Red Dragon spacecraft, would give NASA several new and powerful capabilities, including a map of all-water ice on Mars and a long-coveted return of Martian rocks to Earth.

The exploration of Mars depends on logistics—principally the capacity for overhead imaging and high-bandwidth communications. “This is exactly the problem our generals have in any theater they operate in on Earth,” Grunsfeld explained in an interview with Ars. “When they go and they’re planning an op, they want to know what their assets are for communication and satellite reconnaissance.”

At present NASA relies on repurposing old science spacecraft, such as the Mars Reconnaissance Orbiter and Mars Odyssey, for communication, but the space agency cannot rely on these aging vehicles to survive into the early 2020s. Grunsfeld said the next step for NASA should be to launch a communications spacecraft to Mars in 2022, the next available window after the Mars 2020 rover launches. “Right now most of what happens on Mars stays on Mars, because we don’t have the bandwidth to get the data back,” Grunsfeld said. Instead of megabits, scientists need gigabits to return observations from rovers and orbiters.

In addition to communications, Grunsfeld believes the spacecraft launched in 2020 should include a high-resolution imager and a ground-penetrating radar, which could map out all of the accessible sources of ice for science and for human exploration. The problem with such a mapping mission is that it would require large amounts of power for the radar and, therefore, could cost as much as $1 billion.

While Congress dislikes the idea of sending a robotic spacecraft to retrieve a boulder from an asteroid, it supports some of the technology behind the mission, particularly solar electric propulsion, which uses a solar-powered ion drive to propel a spacecraft. This means of propulsion, although slower than a conventional rocket, is seen as a useful means of moving payloads around the Solar System because it uses significantly less fuel. There is broad support for a “demonstration” mission of solar electric propulsion (SEP), just not one to an asteroid, which seems a diversion from NASA’s plans to explore cislunar space and then Mars with humans.

Meanwhile, in 2024, another spacecraft could launch to Mars—perhaps one of SpaceX’s Red Dragons, Grunsfeld said—carrying a small rover and a Mars ascent vehicle. This rover would have the primary purpose of collecting Martian rock samples cached by the Mars 2020 rover and then returning to the ascent vehicle. After launching back to Mars orbit, the ascent vehicle would dock with the SEP spacecraft and return to Earth.

Consider the potential achievements of this two-mission strategy. By 2025 NASA would have a new, high-bandwidth communications and imaging satellite in orbit around Mars; find all the water humans would need there; demonstrate solar electric propulsion; prove the capability of conducting a roundtrip flight to Mars before sending humans and; finally, conduct a Mars sample return mission, the highest priority of the planetary science community.

“A lot of people like this idea,” Grunsfeld said. But, he added with a shrug, “It’s not the current baseline.” That’s code for the fact that NASA is a White House agency. The president has designated NASA to visit an asteroid, and so the agency will continue plan to do so. For now. The mandate to visit an asteroid will evaporate in January.

When the Trump transition team and Congressional aides review the asteroid mission, they’re likely to scuttle it. However, given the widespread interest in developing SEP technology, some kind of demonstration mission, a new baseline, will be called for.

The projected cost of the asteroid-retrieval mission, just the spacecraft and its mechanism for grabbing a boulder, has already risen to $1.4 billion. With its launch costs, this could rise to about $2 billion before it flies in the early 2020s. These estimated costs are not that much less than it would cost to pull off Grunsfeld’s two-mission Mars strategy and enjoy its significantly broader range of benefits.