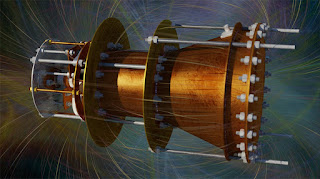 For years, space geeks have been intrigued by the idea of propulsion systems that don’t need propellant – and now one of the best-known concepts, known as the EmDrive, is getting a serious once-over.

The EmDrive, short for electromagnetic drive, could be revolutionary for spaceflight if it works. Spaceships could dispense with the mass of rocket fuel, and because the velocity builds up progressively, trips to Mars and beyond would be much faster and simpler.

The concept involves bouncing microwaves around a closed cavity that’s shaped like a cone. The shape supposedly funnels the microwaves to generate forward thrust.

The problem is, Newton’s Third Law of Motion says it shouldn’t work that way. If there’s an equal and opposite reaction for every action, the skeptics say the EmDrive – and the spaceship it’s bolted onto – should stay perfectly still. The effect has been compared to trying to push your car down the road by sitting in the driver’s seat and pushing against the steering wheel.

For more than 15 years, researchers associated with NASA’s Johnson Space Center have been trying to determine whether the “impossible” effect is actually possible, and more recently Chinese researchers have gotten into the act.

Proponents of the EmDrive say their experiments show a measurable effect, but most physicists have pooh-poohed the results. The back-and-forth is reminiscent of the debate over “faster-than-light neutrinos” in 2011 – a debate that was settled when researchers traced their readings to a loose fiber-optic cable.

A turning point for the EmDrive came last month, when a peer-reviewed publication called the AIAA Journal of Propulsion and Power accepted a paper on the NASA team’s latest findings. The effect was measured at 1.2 millinewtons per kilowatt. That’s small compared to chemical rocket propulsion, but significant compared to, say, light sail propulsion.

That paper got the folks at the Tau Zero Foundation interested. Today, Tau Zero’s founding architect, Marc Millis, assessed the findings with the aid of other propulsion experts from around the world.

Their verdict? It’s complicated, but they say the research merits further study.

“The experimental methods and resulting data indicate a possible new force-producing effect, but not yet satisfying the threshold of ‘extraordinary evidence for extraordinary claims’ – especially since this is a measurement of small effects,” Millis and his colleagues write in an assessment published on the Centauri Dreams website.

In their view, the tests that have been conducted so far aren’t rigorous enough to exclude the possibility of experimental error – but they’s still worthy of note.

Millis said he began the analysis with a “negative bias” against the EmDrive claims but tried to put that aside as he reviewed the work and brought in additional expertise.

“I have to question my earlier bias that the prior data was entirely due to experimental artifacts and proponent biases,” said Millis, the former head of NASA’s Breakthrough Propulsion Physics project.

He and his colleagues still see problems with the experimental setup described in the latest paper, as well as the NASA team’s interpretation of the results.

“To break the cycle of endlessly not doing the right things to get a definitive answer, we must begin a more in-depth experimental program using qualified and impartial labs, plus qualified and impartial analysts,” Millis and the other advisers write. “The Tau Zero Foundation stands ready to make arrangements with suitable labs and analysts to produce reliable findings, pro or con.”

Does this mean Millis thinks the EmDrive is for real? No. At least, not yet. He says that the force effect still hasn’t been confirmed, and that it’s premature to make claims about the hypothetical mechanisms behind it – for example, Unruh radiation or dark matter or pilot-wave theory.

There are still plenty of folks who question whether testing the technology is worth the effort. “Qualified labs and analysts have much more important things to do!” one commenter wrote in response to the Centauri Dreams analysis. “I hope they don’t waste my taxes to do that!”

But Jerry Pournelle, who’s a science-fiction writer with experience in aerospace research, argues that checking out the EmDrive would be a worthwhile exercise, no matter how the experiments turn out.

“Given the costs – low – of a ground test that should produce extraordinary evidence, it would seem very reasonable to me to pay for two or three independent experimentum cruccii at the national laboratories,” Pournelle wrote in a posting to his Chaos Manor online journal. “Yes, they have other important work to do (or should), but constructing an EmDrive is within the capabilities of any university physics department and some high schools.”