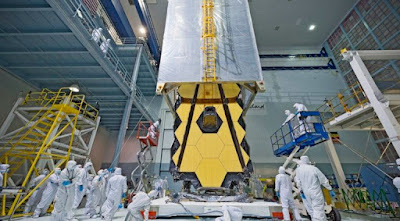 GRAPEVINE, Texas — As NASA prepares to resume vibration testing of the James Webb Space Telescope after an anomaly last month, it’s asking astronomers to start developing proposals for observations to be carried out by the observatory after its launch.

At a town hall meeting during the 229th Meeting of the American Astronomical Society here Jan. 5, JWST officials said they were formally releasing calls for proposals for observations that would be carried out starting in April 2019, about six months after the telescope’s scheduled launch.

“This is really exciting for me,” said Eric Smith, the JWST program director at NASA, noting that, for years, the program has focused more on the development of the telescope than its science. “This year marks the return of the [science] community to the program.”

One call for proposals announced at the meeting is for what are known as “guaranteed time observations,” reserved for astronomers who participated in the development of instruments, software or other capabilities for JWST. The other is for “early release” observations that any astronomer can propose to carry out and are intended to show the telescope’s capabilities to the astronomical community to help them plan later proposals. A more general call for proposals for the telescope’s first year of observations, known as Cycle 1, will be released in late 2017.

As scientists start to plan their observing proposals, JWST engineers and managers are wrapping up an investigation into an anomaly that took place Dec. 3 when the telescope’s optics and science instruments were undergoing a vibration test at NASA’s Goddard Space Flight Center designed to simulate the conditions they will experience during launch.

NASA, in a Jan. 3 statement, said that the test shut down a fraction of a second after accelerometers measured a “higher-than-expected response” at a specific frequency. Analyses of the telescope found no evidence of any damage.

The cause of the anomaly remains under investigation, but agency officials said they believed that vibration testing of the telescope could resume later this month. “Currently, the team is continuing their analyses with the goal of having a review of their findings, conclusions and plans for resuming vibration testing in January,” Smith said in the statement.

“They’re on track to narrow it down to one thing in a relatively short time,” Paul Hertz, director of NASA’s astrophysics division, said in a Jan. 5 interview here. “They don’t anticipate that one thing being hard to fix.”

Smith, at the town hall meeting, said that the current schedule calls for shipping the telescope optics and instruments in April to the Johnson Space Center, where it will undergo tests in a thermal vacuum chamber there. It will then be shipped in October to a Northrop Grumman facility in California to be integrated with the spacecraft bus and sunshade.

He noted that JWST remains on budget and on schedule for an October 2018 launch, and has adequate schedule margin to deal with issues like the vibration anomaly that may come up during testing of the spacecraft. “We’re in a phase of the program now where we’ll meet many new challenges, different from the challenges we had before,” he said. “When problems arise, I’m really confident in the team that will solve them.”