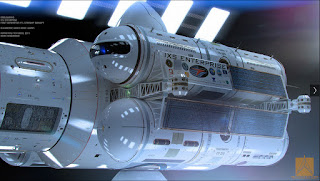 In a seismically isolated room within the Johnson Space Center, NASA scientists are performing an extraordinarily ambitious experiment—aiming to use a strong electric field to bend the fabric of space and time. The goal? Faster-than-light interstellar travel. The story may seem like science fiction and it is…or at least, it used to be.

In the early 1990s, Miguel Alcubierre, a theoretical physics Ph.D. student, sat down to watch an episode of Star Trek. In the show, a technology called “warp drive” gave ships the ability to travel multi-light-year distances in a single prime-time episode. Alcubierre’s curiosity was peaked—how would a warp drive work in the real world?

To answer this question, Alcubierre had to sidestep the “cosmic speed limit.” That’s a fear that Einstein’s theory of special relativity calls impossible. But the student spotted a loophole. Everything in the universe may be limited by the speed of light, but the fabric of space and time itself can expand contract at any speed. Alcubierre discovered that if space-time could be made to contract in front of a ship, and expand behind it, the ship would be propelled forward at an immense speed.

“While it sounds very sci-fi, the warp drive is theoretically possible, by making space and time bend in a particular way,” Geraint Lewis, Professor of Astrophysics at the University of Sydney, says. “With this bending, a small bubble of unbent space-time can be propelled across the Universe at any speed you want.”

If you can get your spacecraft in that bubble, you’re off.

In 1994, Alcubierre published a paper describing solutions to Einstein’s equations that would allow for faster-than-light travel. His idea doesn’t violate special relativity because it is not the ship itself that is “moving,” but the pocket of space-time it’s within. At the time he introduced the idea, it was just a mathematical possibility. He argued the amount of energy it would take to beat light-speed was the equivalent to the energy produced by the Sun over 10 billion years. In the past two decades, the idea has evolved, and those numbers have been scaled down.

Now, the process is believed to require the energy equivalent to what the Sun gives out in less than one millionth of a second. In 2011, NASA accounted they were launching preliminary experiments to test its feasibility in the lab.

“We know nature can bend space-time,” Lewis says. The NASA experiment generates an extremely powerful electric field and then fires a laser through it. Any space-time compression will shorten the distance traveled by the laser beam. “If it works, [it will be] the first baby steps in the direction of a warp drive.”

Preliminary results, presented in 2013, were inconclusive. Now, the team is working to increase the sensitivity of the instrument that measures the distance traveled by the laser beam to detect contractions of 5 nanometers. But even if the team succeeds, it would only reveal that it is possible to contract space-time in front of the nano craft. The more difficult feat is expanding space-time behind the craft, which would require dark energy to achieve. Of course, we don’t even know for sure if dark energy even exists.

“Some think that malleable negative energy might be impossible, putting the proverbial spanner in the warp-drive works. But theoretical physics has not ruled this out,” Lewis says.