NASA's Mars Plan May Include Yearlong Mission to the Moon A group of astronauts may spend a year in orbit around the moon in the late 2020s as part of NASA's plan to send humans to Mars in the 2030s, agency officials said today (May 9).

Greg Williams, NASA's deputy associate administrator for policy and plans in the agency's Human Exploration and Operations Mission Directorate, spoke today at the Humans to Mars Summit in Washington D.C. and provided a detailed look at the first two phases of NASA's current plan to send humans to Mars.

The agency recently announced that its Mars plan now includes building a "deep-space gateway" around the moon to serve as a testing ground for operations and technology that will be required for those Red Planet missions, Williams said. Eventually, the lunar presence would also serve as a launching point for the spacecraft that will carry humans to Mars, he added. The yearlong crewed mission around the moon in 2027 is one of the major future milestones of the current plan.

Before that yearlong lunar mission, however, there would be at least five missions, four of them crewed, to deliver hardware, such as a crew habitat, Williams said during his presentation. The last piece of delivered hardware would be the actual Deep Space Transport vehicle that would later be used to carry a crew to Mars, he said. 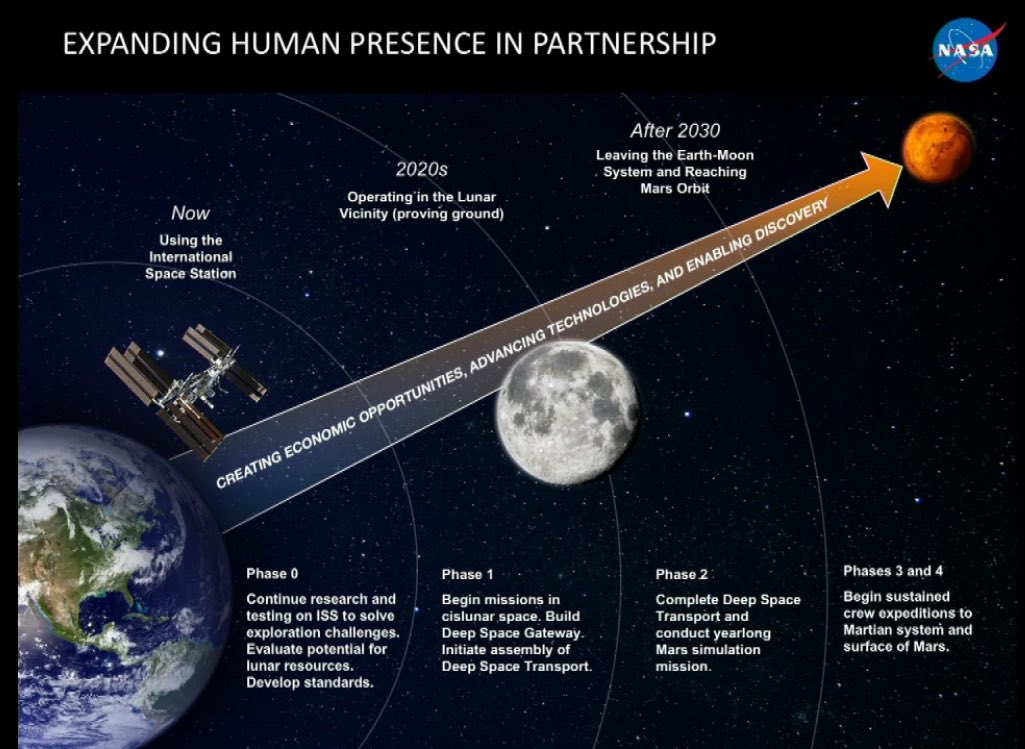 "If we could conduct a yearlong crewed mission on this Deep Space Transport in cislunar space, we believe we will know enough that we could then send this thing, crewed, on a 1,000-day mission to the Mars system and back," Williams said.

Inside NASA, the yearlong mission was being casually referred to as a "shakedown cruise," which is a term used in the Navy to describe a trip intended to test the performance of a new ship, Williams said. But the team decided to change the terminology because, "if you have a Sicilian mafia background, ['shakedown'] has a different connotation," he said, referring to the illegal practice of extorting money from small businesses, generating laughter from the audience. "So we're still wrestling with how we want to describe this thing."

A plan to get to Mars

Currently, the lunar stages of the plan to get humans to Mars rely heavily on NASA's Space Launch System (SLS) rocket to send the necessary payloads and crews to cislunar space. (Cislunar refers to the region between Earth and the moon, including orbits around the moon itself. Williams said NASA would like to see some of its vehicles not only occupy a single orbit around the moon, but make trips to various locations in cislunar space.) The date of the first SLS flight is yet to be determined as the agency discusses the possibility of including a crew on that maiden voyage. The rocket would carry crews in the agency's Orion space capsule, which has made one uncrewed test flight.

Williams focused mainly on the first two phases of NASA's humans to Mars plan, which will establish the deep-space gateway. Phase 1 is scheduled to be carried out between 2018 and 2026, and would include four crewed flights to cislunar space to deliver four key pieces of infrastructure: a power and propulsion bus, a crew habitat, a logistics module (for science research) and an airlock for other visiting vehicles. Williams said the facility would also include a robotic arm that could help provide the module with more autonomous functions. (Details about the current timeline, and many of the slides Williams used in his talk, can be found here.)

Phase 2, which would begin in 2027, would start with an uncrewed mission to deliver the Deep Space Transport vehicle to cislunar space, followed by a flight to deliver the one-year crew to thefacility. In the late 2020s, there would be more flights to deliver the supplies necessary for the first human flights to the Mars system in the 2030s.

This plan is "evolving," Williams noted, and it will likely change as NASA establishes collaborations with industry partners and other nations to support the long-term mission.

"We're trying to lead this journey to Mars with a broad range of partnerships," Williams said. "One of the things we'll be doing over the next few years is, putting that package together: what players want to provide what — both nationally and internationally — and how we can together, with NASA in an orchestrating role, really move out on these crewed missions to Mars."