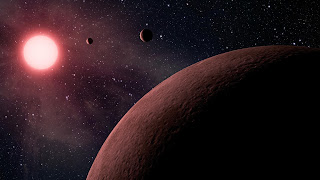 The Kepler space telescope's latest and most complete planet catalog adds 219 new candidates, including one that could be a close cousin to Earth.

NASA announced the latest findings Monday in its hunt for friendly exoplanets, and the haul includes 219 new candidates. Of those, 10 are potentially rocky and located in the habitable zones of their stars where liquid water might be found.

The findings come courtesy of NASA's pioneering Kepler space telescope, our eye in the sky when it comes to spotting potentially habitable planets beyond our solar system. It's designed to find rocky planets (not gaseous ones like Jupiter) that are located in habitable zones of stars where temperatures are temperate enough to potentially sustain life as we know it.

Of particular note in this newest batch is KOI-7711, which could be a close cousin to Earth based on its size and distance to its sun-like star. "KOI" stands for "Kepler object of interest." "There's a lot we don't know about this planet," said Kepler researcher Susan Mullally, so it's too soon to say if KOI-7711 is truly a twin of Earth with a similar atmosphere and liquid water.

Kepler spots potential planets by looking for a dimming of a star's brightness due to a planet crossing in front of it. "The latest Kepler catalog of planet candidates was created using the most sophisticated analyses yet, yielding the most complete and reliable accounting of distant worlds to date," NASA says.

So far, Kepler's missions have identified more than 4,000 candidate planets. The last big group from Kepler's K2 mission came in July 2016 with the announcement of over 100 new exoplanets. So far, NASA scientists have used Kepler to identify around 50 terrestrial-size planets in their stars' "Goldilocks zones" where it's not too hot and not too cold.

Kepler's discoveries have sparked hopes of finding Earth-like planets, but it has also dashed them. Exoplanet Kepler-438b seemed like an exciting candidate for hosting life, but in 2015 scientists said it was actually uninhabitable due to its star's flares.

Kepler launched in 2009, but its time is limited. NASA is working on the Transiting Exoplanet Survey Satellite (TESS), which is scheduled to launch in 2018 on a fresh exoplanet-hunting mission.