After Delays, SpaceX and Boeing Aim to Launch Astronauts Next Year

The race is on between the Dragon 2 and the Starliner. 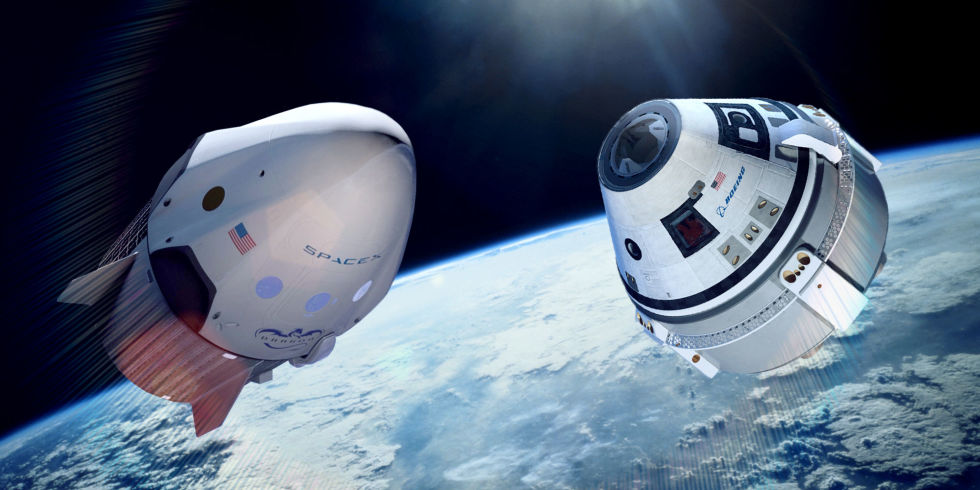 Back in 2014, SpaceX and Boeing both received contracts under NASA's Commercial Crew Development program to build spacecraft that could carry astronauts to the International Space Station. The program is intended to allow NASA to launch astronauts on American spacecraft again, something that hasn't happened since the last flight of the space shuttle in 2011.

The spacecraft being developed by SpaceX and Boeing—the Dragon 2 and the CST-100 Starliner, respectively—proved to be more difficult than originally anticipated. Both companies pushed back their plans for 2017 flights to 2018. Elon Musk recently said the Crew Dragon, which is what NASA calls the Dragon 2, is "way more difficult" than the cargo version of the spacecraft that is used to take supplies to the ISS. "As soon as people enter the picture, it's really a giant step up in making sure things go right," said Musk at a recent panel on the commercial crew program. "The oversight from NASA is much tougher."

Fortunately, however, the work to achieve flights next year seems to be progressing nicely. NASA along with Boeing and SpaceX have indicated that they are on track to hit target launch dates in 2018. A July 20 report released by NASA shows that SpaceX is still targeting an unmanned test flight in February 2018 and a crewed flight in June 2018, and Boeing is aiming to launch an unmanned test flight in June 2018 and a crewed flight in August 2018. Boeing also plans to conduct pad abort tests in early 2018.

Future delays are certainly possible, and Boeing's director of the Starliner program, Chris Ferguson, called the timeline "a very aggressive test program," as reported by Space News. Still, Ferguson said it's possible that the first real mission to take astronauts to the ISS on the Starliner could launch as soon as December 2018. After that, there will not be another change in personnel aboard the space station until around May 2019.

SpaceX plans to launch its Dragon 2 on an upgraded version of the Falcon 9 rocket known as Block 5, currently in development. The Block 5 iteration of the Falcon 9 should produce more thrust in all engines and have reinforced landing legs. Boeing plans to launch the Starliner on an Atlas V rocket supplied by United Launch Alliance (ULA), a joint venture between Boeing and Lockheed Martin.

While SpaceX tends to keep everything close to the chest, there are a few future announcements from Boeing that could indicate progress in its commercial crew program. First of all, ULA will want a preliminary agreement about a launch about a year in advance, so it's possible we hear something from ULA about the first test flight of the Starliner sooner rather than later.

Also, the crewed test flight of the the Starliner will include a NASA astronaut and a Boeing test pilot. When NASA announces the astronaut for that flight, it will be a strong indication that the the agency is confident the launch is on track. "Once when they feel comfortable that they're about 12 months out from a crewed flight launch, I think you can see an assignment come out," said Ferguson.

SpaceX and Boeing have hit a few snags in their quest to build human-rated spacecraft, but their labors are finally coming together. Come 2018, Americans could fly on American spaceships once again.