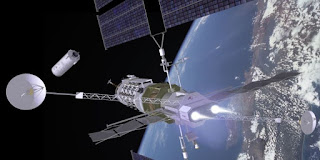 Most of today's rockets are chemical rockets, which means they propel themselves through space by combining certain chemicals in a way that makes them explosive. Chemical rockets are heavy and fast-burning, which is great for getting off the surface of Earth, but less great for long voyages to the outer solar system.

For these longer trips, NASA is looking at using a new type of rocket: the plasma rocket.

NASA awarded a contract to the company Ad Astra back in 2015 to build a plasma rocket, and that rocket is rapidly approaching readiness. The company has been running several short tests of the engine and is preparing for a longer, 100-hour test. Once that happens sometime next year, the rocket engine will be closer to real missions.

The plasma rocket, the Variable Specific Impulse Magnetoplasma Rocket (VASIMR), works by heating neon or argon gas to incredibly high temperatures using magnetic fields. That hot plasma is then fired out of the back of the rocket at very high speeds, providing thrust.

The plasma rocket has an advantage over traditional chemical propellants in that it can provide a small amount of thrust over a very long time, such as days, weeks, or months. Longer burn times mean the rocket needs less fuel, and less fuel means the rocket can carry more cargo. Of course, longer burn times also means longer travel times, but when you're just ferrying around supplies a few extra weeks or months isn't too important.

In a few short years, plasma might be propelling us around the solar system.