After months of hinting, Vice President Mike Pence finally made it clear today that the Trump administration will direct NASA to land humans on the Moon and establish a more permanent presence on the lunar surface. It's a return to the vision of President George W. Bush, which was deferred when President Obama reoriented the space agency toward a journey to Mars.

Pence made the administration’s intentions known in a Wall Street Journal op-ed, as well as a speech he gave during the inaugural meeting of the National Space Council — a newly resurrected executive group aimed at guiding the US space agenda. “We will return NASA astronauts to the Moon — not only to leave behind footprints and flags, but to build the foundation, we need to send Americans to Mars and beyond,” he said to a crowd of representatives and press at the Smithsonian National Air and Space Museum’s Steven F. Udvar-Hazy Center in Chantilly, Virginia.

It’s a move that many within the space community have suspected for a while. Pence suggested a return to the Moon during a speech at NASA’s Kennedy Space Center in Florida in July. And many members of the National Space Council and Trump’s NASA transition team have been advocates of lunar missions. However it still marks a fundamental change for the space agency, which has been focused on sending humans to Mars since 2010 — without any plans for landing people on the Moon.

For now, it’s unknown how this destination shift will affect NASA’s long-term plans. For the last decade, NASA has been developing a new rocket and spacecraft — the Space Launch System and Orion — to take astronauts into deep space and onto Mars. The current plan is to use these vehicles to build a space station in the vicinity of the Moon, known as the Deep Space Gateway, where astronauts can train and then depart for missions to Mars. But it’s possible those vehicles could be used to go to the Moon’s surface instead. Versions of the SLS rocket and Orion capsule were originally conceived as part of the Constellation program — an effort under Bush to take astronauts to the Moon that was canceled by Obama. 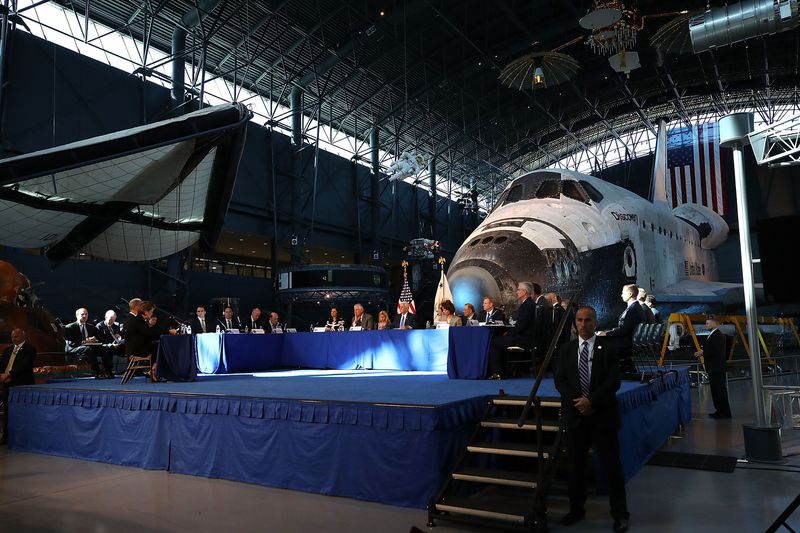 It seems likely that NASA will leverage partnerships with commercial companies to help it get back to the Moon. A big focus of today’s council meeting revolved around how NASA works with private space companies to pull off its missions in space. “American companies are on the cutting edge of space technology, and they’re developing new rockets, spaceships, and satellites that will take us further into space faster than ever before,” Pence said. “By fostering much stronger partnerships between the federal government and the realm of industry, and bringing the full force of our national interests to bear, American leadership in space will be assured.” Pence also stressed the importance of commercial companies maintaining a permanent presence in lower Earth orbit so that NASA could focus on deep-space missions.

However, it’s unclear what truly lies ahead for NASA, as most of today’s National Space Council meeting was big on talk, while light on concrete strategies. The meeting was filled with presentations from various space industry leaders — including those from SpaceX, Blue Origin, Boeing, and Lockheed Martin. The representatives of these companies discussed how their organizations could best serve NASA in achieving its goals, either by providing rockets and services or by building new space vehicles. SpaceX’s Gwynne Shotwell touted the company’s successful Falcon 9 rocket launches and landings, while Boeing reminded NASA of its long history building the Space Shuttle and the International Space Station.

Above all, Pence stressed that the US would lead in space again under the Trump administration. He spent a great deal of his speech lamenting the fact that American astronauts have not launched into deep space in the last 45 years, and that NASA is currently relying on Russian vehicles to ferry astronauts to and from the International Space Station. “America seems to have lost our edge in space,” said Pence, “and those days are over.”

But it could be some time before we know how the Trump administration plans to lead in space again. No new policies are coming out of the National Space Council meeting, and it’s ultimately up to Congress to decide how NASA’s budget is spent. Perhaps we’ll see some changes to the budget later this year, or perhaps with the president’s budget request early next year. “With the upcoming budget process, we will look to solidify this work with our new goals in place,” NASA’s acting administrator, Robert Lightfoot said in a statement. But for now, NASA’s route to the Moon isn’t truly certain.