November 01, 2017
The EmDrive propulsion system might be able to take us to the stars, but first it must be reconciled with the laws of physics.

A tentative theoretical explanation for the mysterious, "impossible" EmDrive propulsion system was published in the Journal of Applied Physical Science International in August. First proposed by British engineer Roger Shawyer, the EmDrive is an asymmetric box that looks like a truncated cone, with a standing microwave field inside that—apparently violating known physical laws—seems able to generate thrust and propel the device.

Meanwhile, China's state media claims that the country's scientists have perfected a working EmDrive prototype and are preparing to test it in space. NASA is also funding a feasibility study for an interstellar mission powered by a related exotic propulsion method.

In September 2016, propulsion researchers gathered for a select, invitation-only workshop at an isolated retreat in Estes Park, Colorado. The proceedings and videos of the workshop, sponsored by the Space Studies Institute, are available online.

Later that year, a paper by NASA's Eagleworks team, titled "Measurement of Impulsive Thrust from a Closed Radio-Frequency Cavity in Vacuum," published in the American Institute of Aeronautics and Astronautics (AIAA)'s peer-reviewed Journal of Propulsion and Power, described promising experimental results and hinted at possible theoretical EmDrive models.

The publication of NASA's paper silenced some objections to EmDrive research based on the lack of peer-reviewed publications in top scientific journals. But a more serious debate continues, based on something far more important: the fundamental laws of physics. Some scientists believe EmDrive technology is impossible, because it doesn't seem to adhere to our current understanding of how the universe is supposed to work.

The law of conservation of momentum says there's no way electromagnetic waves bouncing inside a box can push a box forward. Unless, that is, some other physical effect carries momentum away.

Today's reaction-powered spacecraft works like this: Propellant exhaust carries momentum away and generates forward thrust. But the need to carry sufficient propellant is a strong limit for space travel, which makes long-distance space missions expensive to the point of infeasibility.

If the reaction-free EmDrive works, it would open the door for reaction-free space missions, which could reach the planets in weeks instead of months, and at a much lower cost. It could ultimately open a path to the stars. Therefore, it's not surprising that visionary engineers continue to pursue experimental and theoretical EmDrive research, despite the controversial nature of the technology.

In the lab, EmDrive researchers try to conclusively demonstrate that thrust is there. The 2016 NASA paper reports a modest thrust beyond experimental error margins. But this thrust would perform much better, especially for long-distance missions, than a higher thrust on heavier, propellant-based spaceships. In fact, according to the NASA researchers, the EmDrive would outperform other "zero propellant" propulsion systems studied to date, such as light sailing.

Theoretical scientists are trying to understand why and how EmDrive propulsion works. The NASA paper suggests a tentative explanation based on a quantum physics theory, "a nonlocal hidden-variable theory, or pilot-wave theory for short."

A new research paper by a Portuguese scientist, titled "A Possible Explanation for the Em Drive Based on a Pilot Wave Theory" is now trending among EmDrive enthusiasts in the NasaSpaceFlight forum. The paywalled paper proposes a similar model to the NASA one (here's an open access preprint you can read.).

It appears that fluid droplets bouncing on a vibrating fluid bath generate a pilot-wave field that, in turn, guides the motion of the droplets themselves with a striking similarity to quantum behavior. The nonlocal "spooky action at a distance," which puzzled Einstein, still needs to be invoked to explain the dynamics of the pilot-wave field.

However, the EmDrive doesn't seem very quantum: It's just a macroscopic device with good old electromagnetic microwaves inside. Therefore, there's a belief among scientists that the anomalous thrust (if, again, it's really there) should have a classical (non-quantum) explanation based on Maxwell's electromagnetism and Einstein's general relativity.

Mach's principle–the idea that local inertia is determined by distant masses and the structure of the universe at large—could be a starting point. Physicist James F. Woodward has speculated on "Mach effects," or "Woodward effects," based on the Hoyle-Narlikar theory of gravity, a Machian version of general relativity that includes "advanced waves" traveling backward in time from the distant universe.

The simplest Woodward effect, which has been proposed as a theoretical basis for EmDrive and other reactionless propulsion methods, predicts local mass fluctuations that can be harnessed for propulsion without the need for a reaction. 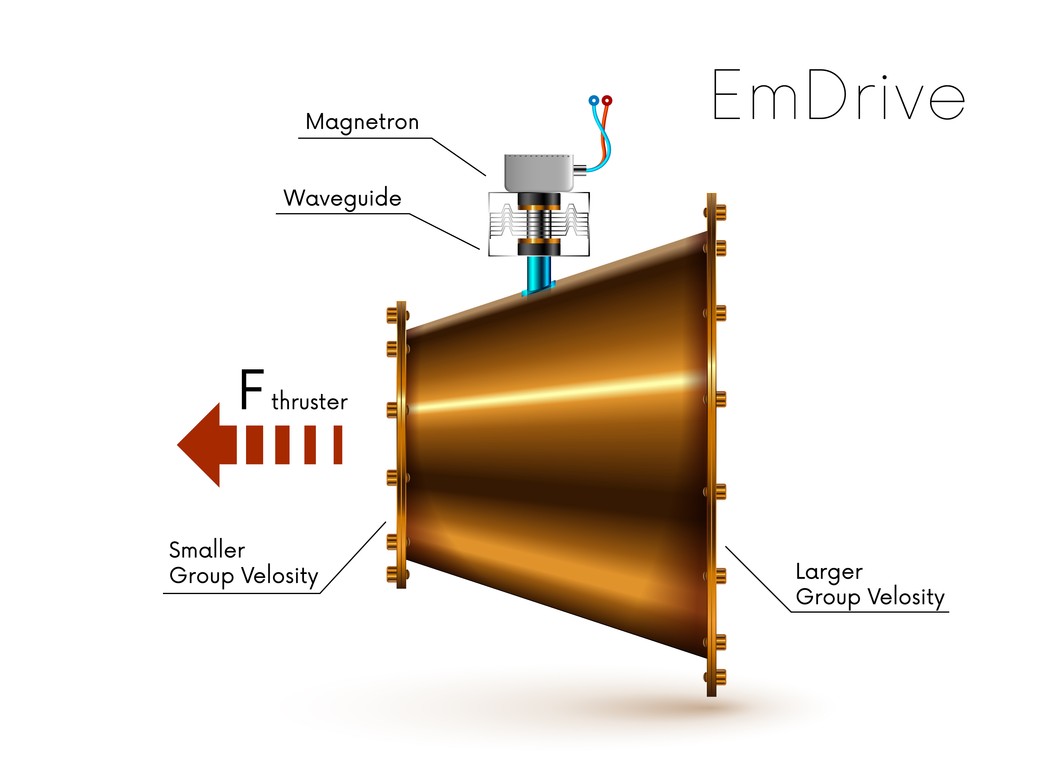 "Woodward [devised] a method to use these mass fluctuations for a novel propulsion scheme: Push the mass when it is heavy and pull it back when it is lighter," explains physicist Martin Tajmar in a recent paper. Tajmar leads a breakthrough propulsion physics group at TU Dresden, focused on testing "the latest EMDrive and Mach-Effect thruster models, the two most promising revolutionary thruster concepts that are presently under investigation at various labs."

Woodward effects could open the door for other more exotic, sci-fi-like propulsion methods, hinted at in the title of Woodward's book " Making Starships and Stargates: The Science of Interstellar Transport and Absurdly Benign Wormholes."

A reactionless propulsion method based on the Woodward effect, first dubbed Mach Effect Thruster (MET) and then renamed Mach Effect Gravitational Assist (MEGA) drive, was funded by the NASA Innovative Advanced Concepts (NIAC) program and is described as a "technically credible, advanced [concept] that could one day 'Change the Possible' in aerospace."

"Woodward's mass fluctuation has been shown to fit perfectly into the framework of gravitational absorber theory, of the type described by Fearn, based on Hoyle and Narlikar theory using advanced waves," note the conclusions of the Estes Park workshop proceedings. The notes from the conference also indicated that many participants are persuaded that the Woodward effects could also be derived from conventional, textbook general relativity, without advanced waves.

Other scientists disagree, and the jury is still out about whether EmDrive is ultimately bullshit. Exotic propulsion research needs more accurate tests in the lab, tests in space, and theoretical studies that can be funded with small grants before we'll really know if it can help us reach the stars.

In fact, many independent scientists participated in the Estes Park workshop. Of course, some critics take advantage of the DIY nature of some of these experiments to deny the scientific value of the research. But in 1905 a young independent "amateur scientist," stealing time from his patent office day job, wrote three papers that changed the course of physics. His name was Albert Einstein.