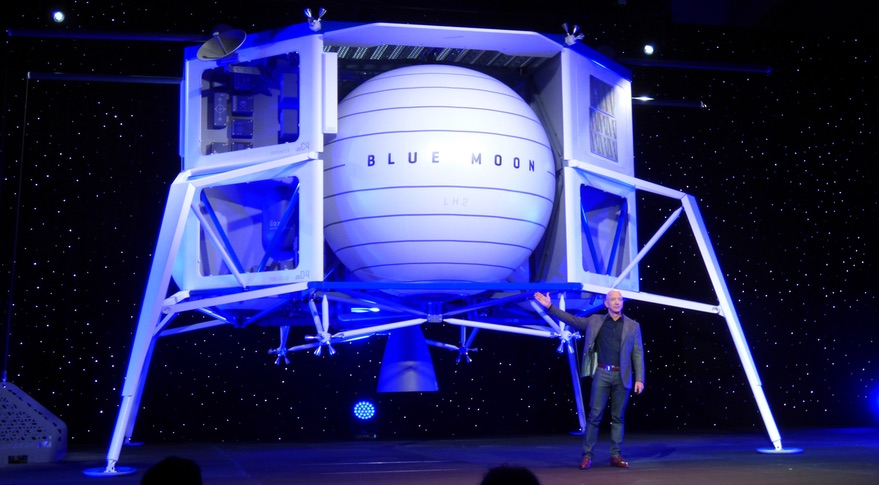 The lander uses liquid hydrogen and liquid oxygen propellants, rather than storable hypergolics. “It’s very high performance,” he said of the choice of propellants. “Ultimately, we’re going to be able to get hydrogen from that water on the moon, and be able to refuel these vehicles on the surface of the moon.”

The liquid hydrogen in particular is used not just for fuel, but for other aspects of the vehicle. Boiloff from the liquid hydrogen can be used to keep the liquid oxygen tanks cold, he said. It will also be used for fuel cells that will produce electrical power for the lander instead of solar cells. “We chose hydrogen fuel cells for this vehicle rather than solar cells because we want to be able to survive the lunar night,” he said, which lasts for two weeks.

Those propellants will be used by a new engine, called BE-7, on the lander. The engine will be able to produce 10,000 pounds-force of thrust and is deeply throttlable. “We’re going to hot fire it for the first time this summer,” Bezos said. “The only reason we can do that is we’ve been working on it for three years.”

Bezos didn’t provide other details about the development of Blue Moon, including how close the vehicle is to a first flight or its development cost. Bezos took no questions from the media or other guests in attendance, including NASA officials, former astronauts and scientists.

Bezos though, did endorse the new policy announced by Vice President Mike Pence in March to land humans on the moon in 2024, and hinted that only Blue Origin is able to meet that deadline in terms of developing a lunar lander.

“I love this. It’s the right thing to do,” he said of the goal. “We can help meet that timeline, but only because we started three years ago.”

Blue Origin’s announcement comes as NASA looks to industry for concepts for lunar landers to achieve that goal. That includes plans to issue a broad agency announcement for integrated lunar lander designs. It wasn’t clear, though, if Blue Origin would be able to provide an ascent stage capable of carrying astronauts, since the Blue Moon lander is designed to carry cargo only.

Much of the speech focused on Bezos’ long-term vision of millions of people living and working in space, tapping the resources needed for humanity’s future. He also briefly touched upon development of the New Shepard suborbital vehicle and New Glenn orbital vehicle, but only reiterated current timelines that call for starting to launch people on New Shepard this year and carry out a first orbital launch of New Glenn in 2021.