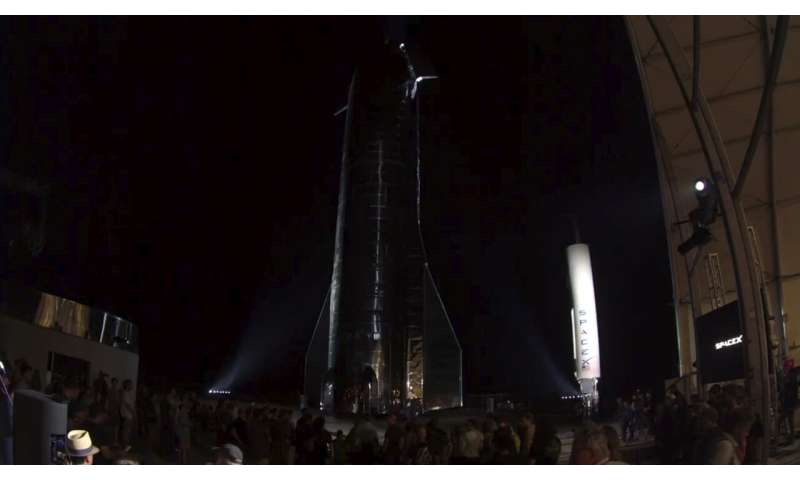 A prototype of SpaceX's Starship Mars spaceship could reach orbit in less than six months and fly humans next year, Chief Executive Officer Elon Musk said Saturday during an unveiling at the company's facility in south Texas.

Standing in front of the towering stainless steel prototype known as Starship Mk 1, Musk told an audience the Hawthorne company would be building versions of the spacecraft in rapid succession at two different SpaceX facilities—one near Boca Chica Beach in Texas and one in Cocoa, Fla.

The goal is to build at least two per site before SpaceX starts work on the Super Heavy rocket booster that will power Starship to orbit. Both Starship and Super Heavy are intended to eventually replace SpaceX's workhorse Falcon 9 rocket and its newer Falcon Heavy rocket, which first launched last year.

Musk did not give an updated timeline for when Starship—essentially a second-stage rocket and lander—would go to Mars. SpaceX has said its "aspirational goal" is to send cargo missions to the Red Planet in 2022.

"It's going to be pretty epic to see this thing take off and come back," said Musk said of Starship.

Here are some other takeaways from Musk's presentation.

Musk estimated that the prototype could be test-launched to an altitude of about 60,000 feet in one to two months. Musk, however, is known for overly optimistic timelines—in 2016, SpaceX said it could send an uncrewed Dragon capsule to Mars as soon as 2018. That mission did not happen, and SpaceX's plans for Mars changed to use Starship, rather than Dragon capsules.

SpaceX's team at Boca Chica Beach built Starship Mk 1 in about four to five months, Musk said. That was after he changed the design from a carbon fiber exterior to stainless steel—a design he said would be cheaper, heat-resistant and would result in a similarly strong, lightweight vehicle.

3. This rocket system will have a lot of fire power

The Starship spaceship will have six Raptor rocket engines, which use liquid oxygen and methane as propellant. The Super Heavy booster could have as many as 37 Raptor engines, though Musk said that number was still in flux and could drop to as few as 24.

4. Starship development only involves a small portion of the company

Though Starship was the focus of Saturday's event, Musk said less than 5% of SpaceX's resources were dedicated to working on development of the Mars spaceship.

"From a SpaceX resource standpoint," Musk said, "our resources are overwhelmingly on Falcon and Dragon."

Musk is under pressure to deliver on other programs. In addition to commercial and government satellite launches, SpaceX is also under contract with NASA, as is Boeing Co., to develop separate crewed spacecraft capable of carrying NASA astronauts to the International Space Station. SpaceX flew an uncrewed Dragon capsule to the space station in March, but that capsule was later destroyed in an accident during a ground test.

On Friday, NASA administrator Jim Bridenstine tweeted that although he was "looking forward to the SpaceX announcement" Saturday, the commercial crew astronaut transport program was "years behind schedule."

"NASA expects to see the same level of enthusiasm focused on the investments of the American taxpayer," Bridenstine tweeted. "It's time to deliver."

Both SpaceX's and Boeing's schedules for capsule test launches have slipped over the years.

Musk said Saturday it would be "very exciting to have a base on the moon," adding that a base focused on scientific research would be useful.

His moon musings come as NASA has stated that it plans to return to the moon and land astronauts at the moon's South Pole by 2024.