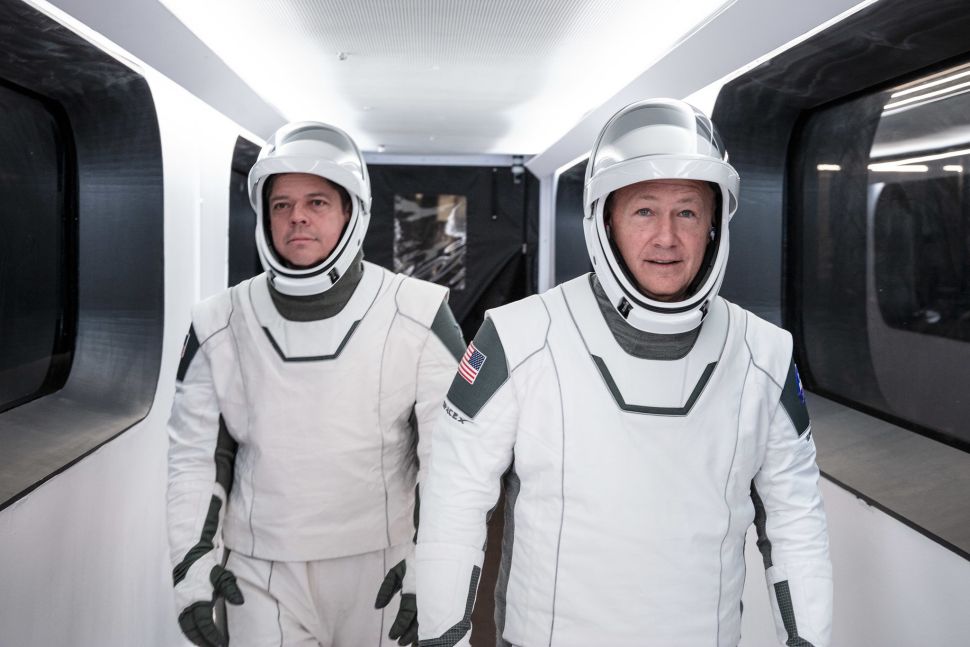 The first piloted flight of SpaceX's Crew Dragon astronaut taxi is likely just a few months away, now that a critical safety test is in the rearview mirror.

SpaceX's Crew Dragon capsule aced an in-flight abort test Sunday morning (Jan. 19), successfully jetting away from its Falcon 9 rocket less than 90 seconds after liftoff and ultimately splashing down softly under parachutes in the Atlantic Ocean, about 20 miles (32 kilometers) off the Florida coast.

The uncrewed test demonstrated the spacecraft's ability to keep astronauts safe in the event of a launch emergency, marking a big step on the path toward crewed flight.

"Congratulations to SpaceX and the entire NASA team on this final major flight milestone that we needed to accomplish," NASA Administrator Jim Bridenstine said during a postlaunch news conference on Sunday.

There's still some work to do before SpaceX can be cleared to launch Demo-2, a crewed flight test that will ferry NASA astronauts Bob Behnken and Doug Hurley to and from the International Space Station (ISS), Bridenstine and others stressed.

The Crew Dragon capsule and Falcon 9 rocket that will fly Demo-2 should be ready to go by the end of February, SpaceX founder and CEO Elon Musk said. The company will check and double-check all the necessary systems, and mapping out the schedule for an ISS mission will also take some time, he added.

Taking all this into consideration, Demo-2 is likely to get off the ground sometime this spring, Musk said, stressing that this is the consensus view of the NASA and SpaceX teams.

"We're highly confident that the hardware will be ready in Q1, most likely end of February but no later than March," Musk said, referring to 2020's first quarter (which consists of January, February and March). "And we think it appears probable that the first crewed launch would occur in the second quarter."

This target is a bit more cautious than one proffered late last week by Lueders, who told reporters that Demo-2 could conceivably lift off in early March.

The timing isn't the only thing about Demo-2 that remains uncertain. The original plan calls for the test flight to last just a week or two, but NASA is considering extending that duration, keeping Behnken and Hurley aboard the ISS for significantly longer to get more science work done, Bridenstine said.

The space agency expects to make a decision about Demo-2's length in the coming weeks, he added.

Behnken and Hurley were on hand for the IFA at NASA's Kennedy Space Center on Sunday, by the way. And the two astronauts said they liked what they saw from Crew Dragon.

"It was a really exciting day for us, to see this really important milestone get accomplished by the SpaceX team and the NASA team," Behnken said in a video posted on Twitter by NASA's Commercial Crew Program. "Probably the most exciting part is to see how much of it kind of proceeded as expected."

When Demo-2 gets off the ground, it will be a big moment for spaceflight and for the United States, Bridenstine and Musk said. After all, the nation has lacked an orbital human spaceflight capability since July 2011, when NASA's space shuttle fleet was grounded. Since then, NASA astronauts have relied on Russian Soyuz spacecraft and rockets to get them to and from the ISS.

The agency is depending on private American spacecraft to change this situation — specifically, Crew Dragon and Boeing's CST-100 Starliner capsule. In September 2014, the Commercial Crew Program awarded SpaceX and Boeing $2.6 billion and $4.2 billion, respectively, to finish work on Crew Dragon and Starliner and to fly six operational, crewed missions to the ISS.

SpaceX now has two big Crew Dragon flight tests under its belt — Sunday's IFA and Demo-1, a weeklong uncrewed test flight to the ISS that the company successfully completed last March. Boeing flew its version of Demo-1, called Orbital Flight Test (OFT), last month. But Starliner didn't rendezvous with the station as planned; the capsule got stranded in the wrong orbit and ended up circling Earth for two days before landing successfully in New Mexico. It's unclear whether NASA will require the company to refly OFT before moving on to a crewed demonstration mission; a decision on that front is expected soon, Bridenstine said recently.

"I think the United States is very much a nation of explorers, a distillation of the human spirit of exploration," Musk said during Sunday's news conference.

"Anyone who has an adventurous bone in their body is going to be very excited about this," he added, referring to the return of orbital human spaceflight to American soil. "And I think it will help reinvigorate interest in space."

Bridenstine also confirmed Sunday that NASA plans to buy another seat aboard the Soyuz this year, to keep the agency's options open and make sure American astronauts will be able to get to and from the orbiting lab.