March 12, 2020
SpaceX plans to build its Mars-colonizing spaceship out of a different stainless-steel alloy. 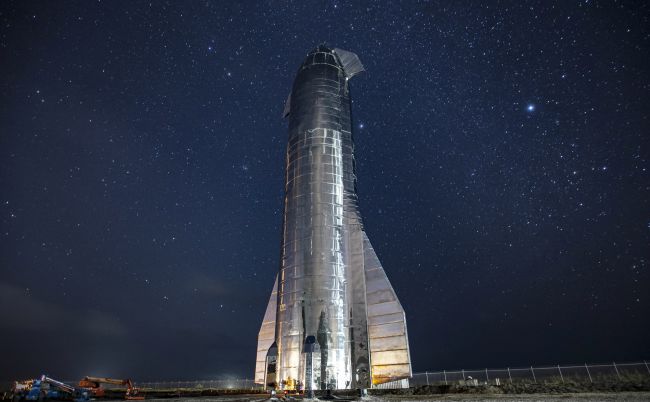 SpaceX is about to make a bone-deep tweak to its Starship Mars-colonizing spacecraft.

The California-based company built its first few Starship prototypes out of a stainless-steel alloy known as 301. But aerospace engineers have been using that particular metallic blend since the middle of the last century, and it's time for SpaceX to make a change, Elon Musk said.

"We should be able to do better in the 2020s than they did in, like, the '50s, you know?" Musk said Monday (March 9) during a keynote conversation at the Satellite 2020 conference in Washington, D.C. "So, I think we'll start switching away from 301 maybe in the next month or two."

SpaceX is still committed to stainless steel for both the 100-passenger Starship and Super Heavy, the giant rocket that will launch the ship off Earth. The company will just migrate to a different alloy, whose constituents SpaceX will tweak over time, Musk said.

Stainless steel is much cheaper than the carbon-fiber material that SpaceX initially aimed to use for Starship and Super Heavy, and the metal has other important advantages as well, Musk stressed. For example, stainless steel handles heating far better than carbon composites do, he said. And that's crucial for the reusable Starship and Super Heavy, both of which will be making many highly energetic trips through Earth's atmosphere, both up and down.

Indeed, rapid and frequent reusability is key to SpaceX's long-term vision. The company aims to slash the cost of spaceflight so much that Mars colonization and other ambitious exploration feats become economically feasible, and the only way to do that is to fly the same hardware over and over again, Musk has said.

Starship is "being designed to be relaunched an hour after landing, with zero nominal work," he said during Monday's keynote. "The only thing you expect to change on a regular basis is propellant."

SpaceX wants to be able to launch each individual Starship three times per day, Musk added. That target number could conceivably be higher if not for the need to line up the ships properly for landing near the launch site — a process that could take three or four orbits each time, he said. (The mechanics are easier for Super Heavy, which will come back down to Earth for a vertical touchdown shortly after liftoff, as the first stages of SpaceX's Falcon 9 and Falcon Heavy rockets already do.)

But that fast-turnaround capability won't define Starship, which is designed to go much farther afield. Musk has said he envisions 1,000 or so Starships departing for Mars every 26 months, when the Red Planet and Earth align favorably for interplanetary missions. These mass departures will help humanity establish a sustainable city on Mars within the next 50 to 100 years, if all goes according to plan. (Starship won't need Super Heavy to launch itself off the moon or Mars, both of which have much weaker gravitational pulls than Earth does.)

The steel switch is in keeping with SpaceX's Starship development strategy, which features frequent iteration and testing to zero in on the best design. For example, the company recently pressure-tested the most recent prototype, known as the SN2. But the first test flights will probably be made by the SN3 version, and the SN4 will tackle higher, longer test missions, Musk tweeted Monday.

Starship could begin launching satellites to Earth orbit as early as next year, SpaceX representatives have said. The company already has one crewed mission on the Starship docket; Japanese billionaire Yusaku Maezawa booked a round-the-moon flight that's scheduled to lift off in 2023.

It's unclear when Starship will be ready to launch people toward Mars, but Musk has a nebulous deadline in mind.

"I hope I'm not dead by the time people go to Mars," the 48-year-old billionaire said. "That would be a great outcome, I think."