CEO Elon Musk has confirmed that SpaceX is already well into the process of building an orbital-class Starship launch pad in Boca Chica, Texas.

After much ado about nothing and a multi-day fan skirmish over whether a new SpaceX construct was meant for a water tower or launch pad, the debate can finally be brought to a close. As of almost two weeks ago, it was just shy of guaranteed that the concrete foundation SpaceX was working on would be wildly excessive for a water tower, turning it into a question of whether it would be a suborbital or orbital-class test stand for Starship.

Now, Musk has confirmed – somewhat surprisingly – that the foundation will ultimately support an “orbital launch mount” capable of hosting what will eventually be the largest and most powerful rocket ever built.

All the way back in September 2019, SpaceX actually broke ground on a separate orbital-class Starship launch pad at Kennedy Space Center (KSC) Launch Complex 39A (LC-39A). Despite rapid progress over the next several months, work on Pad 39A’s Starship additions abruptly ground to a halt in Q1 2020 and has yet to restart. 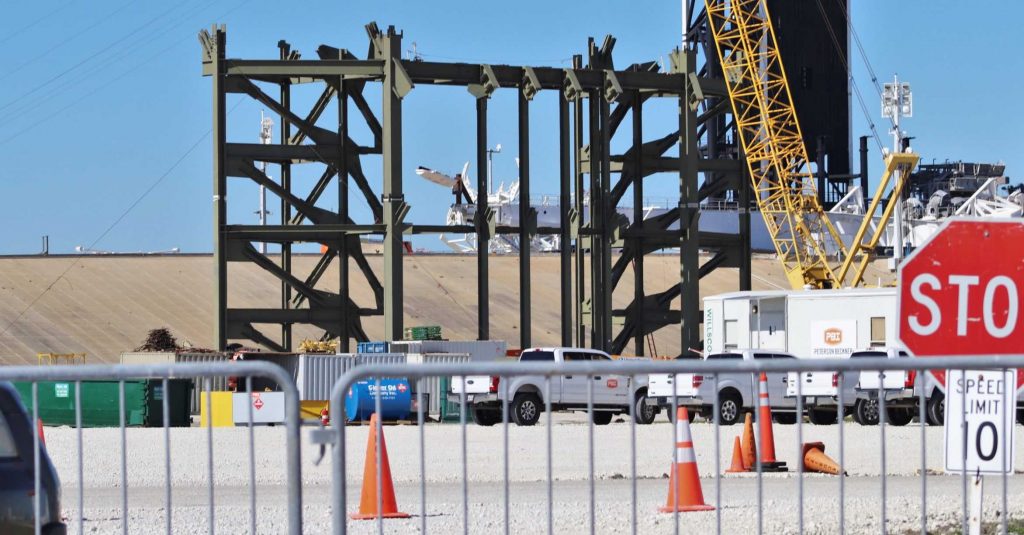 The beginnings of the 39A Starship launch mount closely resembled a conceptual design published as part of an official 2019 SpaceX video. However, in a twist that isn’t actually much of a surprise for long-time followers of SpaceX, the company’s new orbital South Texas launch mount looks almost nothing like 2019 pad renders or the incomplete metalwork at Pad 39A.
In other words, SpaceX – probably lead by Musk himself – has substantially redesigned Starship’s orbital-class launch facilities and/or changed its approach to pad development for the next-generation rocket.
Hexagonal symmetry all the way down to the mount’s foundation pilings suggests that SpaceX’s new Starship pad design will begin with the bare minimum needed for a sturdy launch pad. SpaceX may change the design for Super Heavy but Starship’s thrust section is attached to a skirt with six strengthened sections that host landing legs and hold-down clamps. The sheer heft of ~2m (~6 ft) wide steel and rebar columns – soon to be filled with concrete – and pilings at least as wide and more than 30m (100 ft) deep certainly hints at a final structure capable of surviving the fury of Starship’s Super Heavy booster.
Barring additional changes, Super Heavy will be as tall as the entirety of a Falcon 9 or Falcon Heavy rocket – first stage, second stage, and payload fairing included. Powered by up to 31 Raptor engines, the Super Heavy booster will produce upwards of 72,000 kN (16,000,000 lbf) of thrust at liftoff – nine times the thrust of Falcon 9, triple the thrust of Falcon Heavy, and double the thrust of Saturn V (the most powerful liquid-fuel rocket ever to reach orbit). Combined with Starship, the full stack will weigh roughly 5000 metric tons (11 million lbs) fully fueled. For the purpose of static fire testing and final vehicle checks after ignition but before liftoff, a Super Heavy-class launch mount will need to withstand more than 7200 tons (~16 million lbf) of force.
Meanwhile, SpaceX could be just a few days away from Starship SN6’s hop debut just beside SpaceX’s ongoing orbital launch mount construction, while an 80m (~260 ft) tall Super Heavy booster assembly building may have reached its full height earlier this week.
Source: https://www.teslarati.com/spacex-orbital-starship-launch-pad-texas/