NASA's New Spacecraft Will Have A Star Trek-Like Cockpit 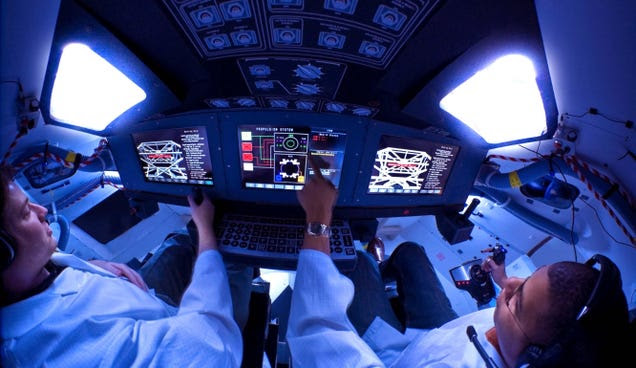 The new Enterprise bridge on Star Trek: TNG replaced buttons and switches with backlit touch panels. This "prophetic" technology was created because production designers didn't have the budget to create and install individually lighted buttons. But, aboard the Orion spacecraft, sci-fi has once again become sci-fact.

An article in the August issue of Air & Space magazine takes readers on a technological tour of NASA's next generation spacecraft, emphasizing the lessons learned from previous designs, including the shuttle. One of the most significant changes is the cockpit. Prior to the debut of touchscreen interfaces on TNG, the article notes, we had come to associate space travel, at least in science fiction, with complex operating environments: astronauts surrounded by banks of switches and indicator lights:

In the 1979 Alien, a visit to "Mother," the operating system of the Nostromo, entails sitting in a capsule-like room, entirely enveloped in a vast array of twinkling lights that do not seem to convey actual information—other than that the computer is (presumably) thinking.

In real-live spaceflight, the environments have hardly been less complex. NASA astronaut and space shuttle veteran Lee Morin, wearing a blue jumpsuit with a "Mach 25" badge, tells me that the shuttle cockpit had 1,249 switches. "There were approximately 2,000 for the whole vehicle," he says.

On Orion, almost all of those switches will have disappeared, or, as Morin says, will have "gone onto the glass," the glass being one of the three flat-panel displays (ringed by, yes, switches) mounted at the astronauts' eye level. Morin has been working on such displays since 2005. "Apollo was a brilliant cockpit," he says, "but everything there basically had one use—a physical gauge, a meter. We were not going to be able to do much with that approach."

Rather than replicating instruments in graphic form on a screen, Orion will have a sophisticated system, dubbed "eProc" (for electronic procedures), that will automatically bring up the relevant display page for the procedure the crew is working on. There will be switches for "a few emergency things," he says, but without the banks of controls, the cabin will be much visually cleaner (and lighter). Three screens, but four astronauts? The "result of a long optimization process," he says, balancing weight, power, and the crew's ability to reach controls. "When we went from four to three screens," he says, "we canted these outboard ones down 10 to 12 degrees to facilitate cross cockpit viewing." Orion could also have a crew of only a commander and a pilot. A joystick helps during moments in flight when reaching the screen would be difficult.