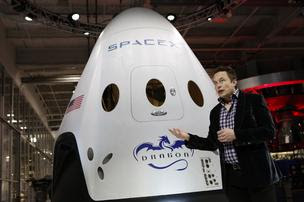 That could be boarding call some day from the SpaceX launch facility near Brownsville where SpaceX CEO Elon Musk and Texas Gov. Rick Perry helped break ground on Monday. Rocket launches could begin from the private commercial launch site in 2016.

Musk said the site could be used someday to help put the first human visitors on Mars, the Texas Tribune reported.

"It very well could be the first person to go to another planet could launch from this location," the Tribune quoted Musk. "This is really going to be a new kind of spaceport that is optimized for commercial operations. Cape Canaveral and Cape Vandenberg are great launch sites, but they are military launch sites. ... What's important for the future of space exploration is to have a truly commercial launch site, just as we have commercial airports.

Musk previously said his personal goal is land humans on the Red Planet and that the survival of humanity is dependant on it becoming able to travel to other planets.

The facility is expected to create roughly 300 jobs and pump $85 million in capital investment into Texas' Rio Grande Valley, the Tribune said. The state put up $15.3 million to help land the launch site.