February 11, 2015
The launch date is still a decade away but preparations are underway for the first human expedition to Mars. Here we explain about the mission, Mars spacecrafts and selecting volunteers to establish a colony on the planet

The Dutch not-for-profit organisation is raising money any way it can. That means broadcasting rights, sponsorship deals, crowd-funding, donations from philanthropists, and licensing intellectual property rights from inventions made along the way. The first mission, costing $6bn (£4bn), aims to send a spacecraft carrying two men and two women to the planet.

What do they need to do?

It’s all quite complicated. The first humans are not scheduled to blast off for Mars until 2024. But plenty of missions are planned beforehand to do vital groundwork. In 2018, a lander would be sent to the planet as a trial-run for technologies that the real mission will need. That will be accompanied by a communications satellite to beam messages back and forth. In 2020, an “intelligent” rover is sent to Mars, along with a trailer. The rover’s job is to scope out a good landing site, far enough north for the soil to contain a good amount of water, but equatorial enough to get plenty of sunlight. Two years after that, in 2022, six cargo missions head off for Mars. They include another rover, two living units and two life support units. These land near the first rover, which tows them into position and sets up solar panels to power the units. The life support unit is meant to produce a breathable atmosphere in the habitat, 3,000 litres of water, and 120kg of oxygen kept in storage. 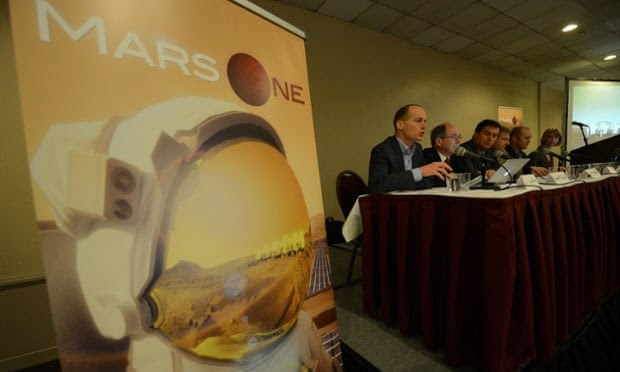 How will the astronauts get to Mars?

Mars One will contract a rocket manufacturer to build them a rocket. That could be Lockheed Martin, SpaceX, or another company. In 2024, they will blast the crew’s landing module and their main living quarters for the voyage into Earth’s orbit and dock them together. The crew then launch into Earth orbit themselves, climb into the waiting Mars spacecraft, and head off for their destination.

How do they land?

The Mars lander module detaches from the spacecraft and descends to the surface. Once down, the crew in their Mars suits are picked up by one of the rovers and taken to the habitat. It will take them a good while to acclimatise to the gravity on Mars. Their first tasks are to deploy more solar panels, and start their efforts to grow food on Mars.

When do they get fresh company?

The second Mars One crew is planned for take off in 2026, for arrival the following year. Their own habitats and life-support units are meant to land within weeks of the first crew arriving. To protect the astronauts from the harsh radiation on Mars, the rovers will pile Martian soil on top of the habitats.