As we begin to think of exoplanets as real worlds we could visit, we will want to go

Once we find habitable exoplanets in distant solar systems, some of us will want to – even feel we have to – explore them 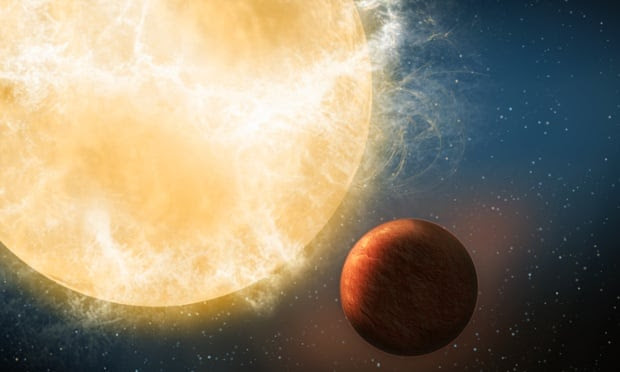 For or most people, Pluto is just another light in the sky, dimmer than our eyes can detect and blobby through even big telescopes. But when the New Horizons spacecraft enters its orbit this summer, Pluto will transform into a real place whose surface we can all finally see.

Though astronomers will plow through New Horizons’ numerical data while sitting in the glow of their computers, in their hearts, they are more like Space-Age Shackletons, with downlink dishes instead of sled dogs. They want to know what it’s like to be on Pluto.

According to University of Virginia anthropologist Lisa Messeri, other scientists are starting to think of planets in other solar systems – exoplanets – as real places and of themselves as explorers – and the rest of us are almost ready to accept that psychological alchemy. Perhaps finally, if they see it, they will go.

The thousands of exoplanets we have discovered exist to us now mostly as the dimming they cause when they pass – like deer in front of headlights – across their star and block some of its light from us. We have a lot of data plots, but we can’t take pretty pictures.

But scientists don’t need photographs to create a vision of what might be beyond our sight; they rarely think of the subjects of their research as strings of numbers despite exoplanets’ two-dimensional personalities, says Messeri. Instead, they spin these abstractions of numbers into concrete (and sometimes hypothetical) characteristics. At meetings, exoplanets scientists trot out the usual graphs, but as Messeri said: “they would interpret them to talk about the wind on the planet, or if there was a hot spot, or if it had a molten surface.”

Exoplanet news headlines confirm this: “Glass Rain May Give Planet Blue Hue”, “Hellish Exoplanet Rains Hot Pebbles”, “Nearby Exoplanet Could Be Covered With Diamond”. In January, NASA even released a set of “Exoplanet Travel Bureau” posters modelled after the kind of National Park prints college freshmen buy to put on their dormitory walls. “If plant life does exist on a planet like Kepler-186f,” reads one, “its photosynthesis could have been influenced by the star’s red-wavelength photons, making for a color palette that’s very different than the greens on Earth.”

While most of us can’t look at data and discern plants on Kepler-186f, we are already acclimated to the idea that someone else can.

Between the stories scientists tell and the pictures those stories help artists create, we are starting to conceive of exoplanets as real worlds, with climates, clouds, and canyons. So in the coming years, when we will probably discover another liveable planet, even if the associated “lightcurve” we see won’t exactly be a detailed portrait, we won’t be able to stop ourselves from imagining its plains, fourteeners, and Saharas.

And once we find habitable real worlds, some of us will want to – even feel we have to – go explore them. The reality of deep space travel is many years off: we need better, faster propulsion systems; we need to learn how to shield our bodies from radiation. We need to stop dust from damaging our spacecraft when it crashes into the siding at high speeds. We need to learn how to supply generations of astronauts with food, water, oxygen and medical care. We need to learn to stay sane living in metal boxes.

We haven’t yet built a colony on Mars, let alone on a planet many light-years away. But the idea of going to Mars isn’t as inspiring as going to a planet where you’d actually like to vacation – which is perhaps why we haven’t put the necessary resources behind long-term near-space exploration. But once an attractive destination exists, our exploratory brains will almost certainly spur us to innovation. Organizations like 100-Year Starship, the Tau Zero Foundation, Icarus Interstellar and (occasionally) NASA already work to solve interstellar-travel problems. Soon, we will all get on board.

When we go, we’ll learn more about how planets form and what’s in between the stars. But that’s not why we’ll do it. We’ll do it because we want to explore, and because we could picture where we were going before we got there.

In 1968, Apollo astronaut Bill Anders sat in the lunar orbiter and pointed his camera’s lens back home. The resulting image, called Earthrise, shows Earth hovering above the lunar horizon. You can’t tell that people are running around it, angry and late for work; you can only tell that it’s green, blue, and borderless. It was the first time we saw our planet as a planet – and that picture sparked the environmental movement. And a future picture (even an imagined one) of another habitable planet could well spark another Space Age.