Starfleet was closer than you think 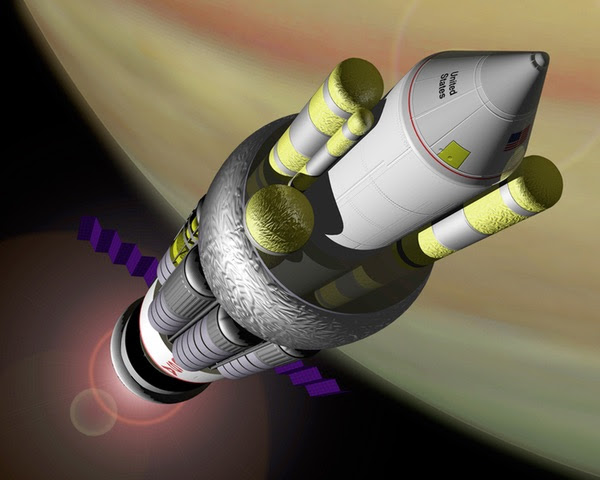 Today, the United States is in the process of a renaissance of interstellar thought and ambition. In the popular culture, with the discovery nearly every day of potentially Earth-like exoplanets, and popular movies like Interstellar, we are seeing an increasing public interest. And in the technical community, there is new leadership when it comes to actually designing interstellar capable spacecraft, such as DARPA’s 100 Year Starship project, Icarus Interstellar, and the Tennessee Valley Interstellar Workshop.

But we could have been so much farther along. After the publication of George Dyson’s book Project Orion, and a few specials, a lot of people know that in the early 1960s DARPA investigated the possibility of a nuclear-pulse-detonation (that is, powered by the explosion of nuclear bombs) spacecraft.

Preceding but also concurrently developed with Apollo, this extremely ambitious project had unbelievable payload capability. Where Apollo at 3,500 tons could only put two tons on the Moon, the smaller Orion (about the same total mass, 4,000 tons) could soft-land 1,200 tons (600 times as much) on the Moon, and the larger (only three times as heavy as Apollo, or 10,000 tons) could soft-land 5,700 tons (nearly 3,000 times as much) on the Moon, or take 1,300 tons of astronauts and consumables on a three-year round-trip to Saturn and back!1 The fission powered Orion could even achieve three to five percent the speed of light, though a more advanced design using fusion might achieve eight to ten percent the speed of light.

Most assume the program was cancelled for technical problems, but that is not the case. Few know how seriously the idea was taken by the top leadership of the US Air Force.

Because internal budget discussions and internal memoranda are not generally released and some only recently declassified, almost nobody knows how close Strategic Air Command (SAC) was to building the beginning of an interstellar-capable fleet. Had the personalities of the Air Force’s civilian leadership been different in 1962, humanity might have settled a good part of the inner solar system and might be launching probes to other stars today. We might also have had the tools to deflect large asteroids and comets.

Recently declassified internal budget documents show that, in 1962, the US Air Force had plans to build entire fleets of giant Orion spacecraft, and was prepared to commit almost 20 percent of its requested space budget from 1963 to 1967 to its realization.

It is one thing to hear Freeman Dyson, the eminent physicist and Project Orion veteran, say that the “end result [of Project Orion] was a rather firm technical basis for believing that vehicles of this type could be developed, tested, and flown. The technical findings of the project have not been seriously challenged by anybody. Its major troubles have been, from the beginning, political.”2 It is another to have that confirmed by Air Force internal memoranda.

America’s near-brush with Starfleet began with Donald Mixson and Fred Gorschboth, two young captains assigned to the Air Force Special Weapons Center at Kirtland Air Force Base. Their job was to investigate the military implications of Orion nuclear pulse propulsion technology, and wargame out a military concept for use.

They developed a plan for a three-tiered space force of dozens of Orion spacecraft deployed in either low, geosynchronous, or lunar orbit squadrons. This fleet would hold both nuclear surface attack missiles to provide a survivable deterrent without risk of being destroyed by a first strike, as well as space-based ICBM interceptors and mines (an early vision of the Strategic Defense Initiative) that could defend the United States from a Soviet attack in the event deterrence failed.

In late 1959, Captain Mixon laid out the evidence for General Thomas Power, the commander in chief of SAC, and obviously convinced him. On January 21, 1961, General Power signed a SAC requirement for a “Strategic Earth Orbital Base” (SEOB) based on the Orion propulsion system and roughly following the space force deployment concept. The SEOB would be “capable of accurate weapon delivery” to “include the capability to attack other aerospace vehicles or bodies of the solar system occupied by an enemy.” The SEOB would also be able to orbit “extremely heavy useful payloads” on the order of 5,000 tons.

General Power was not out there alone. He had the full support of the Chief of Staff of the Air Force, General Curtis E. LeMay. Writing in a 1962 letter to Power, he said, “I share your views regarding the potential of ORION.”5 Nor was it just talk: both the SAC commander and the US Air Force Chief of Staff were willing to put their money where their mouth was. In 1962, funding for the SEOB and Orion propulsion development together accounted for $1.36 billion (over $10 billion in 2014 dollars), or 18 percent of the total Air Force space development budget for fiscal years 1963–1967, as requested by LeMay in his Air Force Space Program

Just what was the capability SAC wanted? A ten-meter Orion ship could get a crew of eight men from Earth to Mars orbit and back in 150 days (chemical missions would require 300–450 days round trip at best) in a vehicle weighing just under 1,000 tons with a 100-ton payload. The SEOB, with a payload capability of 5,000 tons, was akin to the “Advanced Interplanetary Orion” design developed later during Project Orion, which had a gross mass of 10,000 tons and could take 5,300 tons to the same Mars orbit.

So who killed Starfleet? Here is how it went down:

Secretary of the Air Force Eugene Zuckert approved LeMay’s space program but, contrary to his own support of it, refused to request funding for it from DOD, knowing that Secretary of Defense Robert McNamara would not be supportive.

Upon hearing that Orion would not be funded, General Power wrote to the Defense Director of Research and Engineering, Dr. Harold Brown, and argued that “the capability to launch and maneuver truly large payloads [in space] could provide the operational flexibility… [that] could be a decisive factor in achieving scientific and commercial, as well as military supremacy.”

Dr. Brown, the man responsible to McNamara for keeping Air Force research and development constrained to Kennedy Administration wishes, responded, “This development program would be a high risk one… If we accept the possibility that military operations will require large maneuverable payloads in space, it is still far from clear that substantial investment in ORION is warranted now.”

And so, here we are in 2015. Fifty-three years later we still have nothing close to Orion. Rather than get to Mars and back in 150 days, with 5,000 tons, we can’t even contemplate a three-person capsule to Mars for another couple decades.

No doubt Dr. Brown was recommending what he thought was responsible at the time, and recommending spending-averse budgets to minimize risk over the advice of the capability-driven military minds. Perhaps he, like many modern voices, felt the need to fear or temper the perceived rapaciousness and expansionism of such men as LeMay and Power. With their vision would have come challenges to stability and perhaps increased risk of a nuclear conflict on Earth. We may have bought ourselves a little near-term stability, but it was not without cost.

Secretary McNamara’s and Dr. Brown’s conservatism and lack of vision has left humanity in a local minima, trapped in a gravity well, unable to access the vast wealth of the inner solar system, and left the life on our entire planet bare and defenseless against what has emerged as a credible threat: asteroids and comets.

We have traded the grand visions of 1962 for a much more tawdry reality, one where instead of going to space in ships with large crews that could roam the inner solar system in voyages measured in months, and would have laid the foundation for humans to reach other stars, our species has accepted small tin cans that may just be able to send a handful of specialists to Mars before the Apollo lunar landing centennial.

Had the US Air Force not been gelded in 1962, humanity would today be reaching for the stars.