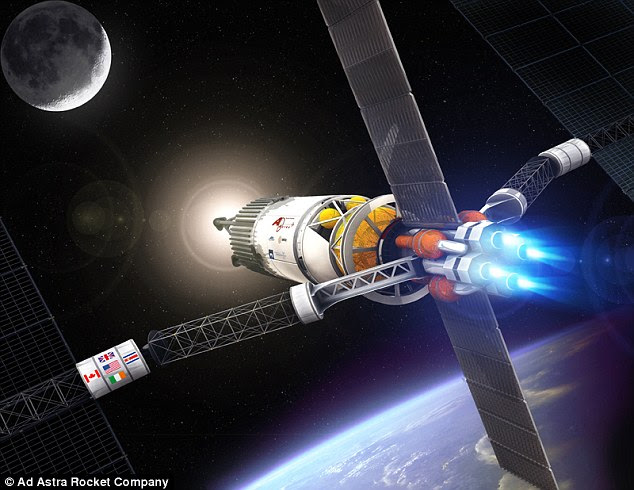 Nasa has selected a variety of companies to work on projects to create advanced space technologies, including faster methods of propulsion.

Their engine shot to fame a few years ago when it was revealed that it could drastically reduce the journey time to Mars from months to weeks - although it may require a nuclear power source.

And following the successful test of a prototype in 2013, it seems Nasa is now considering it for use on a future mission to Mars.

‘We are thrilled by this announcement and proud to be joining forces with Nasa in the final steps of the technology maturation,’ said Dr Franklin Chang Diaz, Ad Astra’s Chairman and CEO, in a statement.

‘We look forward to a very successful partnership as we jointly advance the technology to flight readiness.’

Over three years, Nasa will give the company about £6.8 million ($10 million) to get the engine almost ready to fly in space.

This will be achieved with a demonstration of their new prototype, the VX-200-SS, which will be able to fire continuously for more than 100 hours.

However, this involved short duration bursts for less than a minute. Proving the engine works for more than 100 hours will be key to it one day being used on a spacecraft. 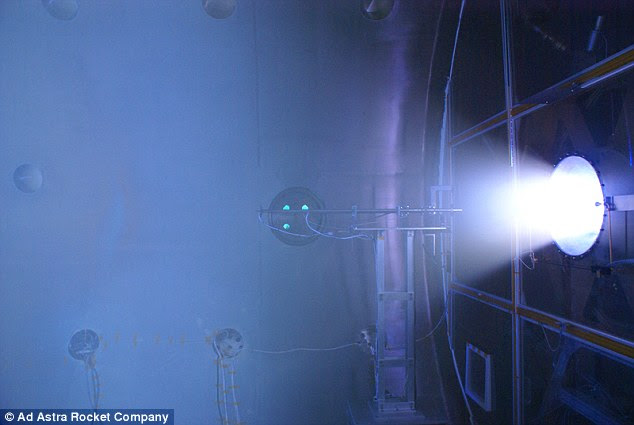 With this and other technologies, Nasa said in a statement they want to develop exploration capabilities around the moon, and at Mars. ‘Commercial partners were selected for their technical ability to mature key technologies and their commitment to the potential applications both for government and private sector uses,’ said William Gerstenmaier, associate administrator for Human Exploration and Operations at Nasa Headquarters. ‘This work ultimately will inform the strategy to move human presence further into the solar system.’

Three advanced electric propulsion projects, including Vasimr, will develop engines that operate in the 50 to 300 kilowatt range.

By comparison, current electric propulsion used by Nasa - such as the ion engine on the Dawn spacecraft - operates at less than five kilowatts.

Meanwhile, seven companies have been picked to work on the habitats that will house astronauts as they make their way to Mars in the 2030s.

While the Orion capsule will take astronauts to and from Earth, it can only sustain a crew of four for 21 days.

To make the journey to Mars, expected to last anywhere from several months to three years, astronauts will need to live in some other structure.

Nasa will be hoping one of the projects it is funding will find a way to house the astronauts for the grueling journey to and from the red planet.

Nasa is also asking companies to development capabilities to sustain a crew of four for 60 days in cis-lunar space - between Earth and the moon - with the ability to scale up to Mars missions.

The companies selected include Bigelow Aerospace, who are creating an inflatable habitation module - a prototype of which will be attached to the ISS in 2018.

And finally, two companies have been selected to develop small satellites - CubeSats - to launch as secondary paylods on the first flight of Nasa’s huge Space Launch System rocket in 2019.

As the rocket is so powerful, it will give these CubeSats a rare opportunity to explore deep space, as opposed to remaining in Earth orbit.