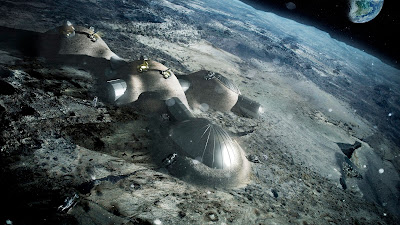 On a September day in Texas, a President’s words ignited the spirit, endeavour, and determination of a nation and set in motion arguably the most significant event in human exploration. “We choose to go to the Moon, we choose to go to the Moon in this decade and do the other things, not because they are easy, but because they are hard.” At the time – 1962 – many didn’t believe President Kennedy’s vision was possible. Only four Americans had flown into space, of those only two had orbited the Earth. The Soviets were ahead in the Space Race. Yet in just over a decade, twelve American men had walked on the surface of the Moon. The impossible become possible. And America had won the race.

Today, there are still only twelve men who have walked on the surface of the Moon. Of those, seven are still alive. The youngest is now 80. According to Apollo 11 Moonwalker, Buzz Aldrin, we could have gone beyond the Moon to Mars ‘as early as the 1980s or at the very latest the 1990s’. Yet somewhere along the line we got side tracked. We haven’t returned to the Moon, or beyond Low Earth Orbit, in over 43 years and attempts to recapture the spirit of Apollo by subsequent Presidents, have fallen short.

But our interest and need to explore the Moon has not waned, with private companies now competing in a new Moon Race. “It is the next natural destination for people. A stepping stone towards Mars and deeper into our solar system. Like learning to camp in our backyard, before we head out to the Antarctic”, says John Thornton, CEO of Astrobotic, a space robotics company, with the goal of making the Moon accessible to the world, by providing a delivery service for payloads to the surface. The Space Angels Network portfolio company was founded in 2007 by William Whittaker in response to the Google Lunar XPRIZE. “This was developed to inspire people from all over the world to explore options for going to the Moon in a resourceful and cost-effective way” says Chanda Gonzales, Prize Lead for the Google Lunar XPRIZE. The challenge being to send a rover to the lunar surface and travel 500m, beaming back videos and images.

“Now is the right time” explains Thornton. “The cost to access space has reached a point where it is viable to build an affordable lunar delivery service that can address the market demand.” For Astrobotic, this means not only providing services for companies that wish to send payloads to the Moon, but also using its Peregrine lander to deliver two of the other competing XPRIZE rovers (Chile and Japan) to the lunar surface. “We have a world class team, coming together to make this a reality.” That team includes recent partnerships with Aerojet Rocketdyne, Airbus, and perhaps most significantly of all DHL. “Our long term goal is to make regular deliveries to the surface of the Moon. We want lunar deliveries to become boring, normal, and routine.”

Whereas in 1962 the Moon was America’s dream, today there is international interest. Our scientific knowledge and understanding has increased to the level where we now know there is significant amounts of water on the Moon. As well as other resources such as minerals and elements, with potential economic benefits back on Earth as well enabling us to explore deeper in the solar system. Something which was once seen as Science Fiction, in movies such as Moon, is becoming reality. “All great ideas start as Science Fiction” adds Thornton. Although Moon mining today certainly faces challenges, agencies and private companies are determined to overcome them.

For Bernard Foing, Executive Director of the European Space Agency’s (ESA) International Lunar Exploration Working Group the goal is to make the Moon the eighth continent. In Europe the plan is for a Moon Village, a permanent lunar outpost for both robots and humans, the natural next project after the International Space Station. Access would be open to to ESA states and other nations around the world. “The ISS is ending, we have to think of the next big project. It really is like a continent with resources very close to the Earth. It is a great platform, where we can really settle in and solve a lot of challenges; using resources, generating economic benefit to fund exploration and benefit from the data we find there.”

Among the international collaborators are Russia, who ESA are working with on a lander to study ices on the Moons poles. “It is an open international project. We expect to have a number of partners. And commercial stakeholders.” The vision includes landing a habitat on the surface of the Moon, similar to the European Columbus module on the ISS “This is within ESA’s capacity”. With the first ESA astronauts potentially on the surface by 2025, by 2050 Foing forecasts that hundreds of people could be on the Moon. “People like you and I could be useful there,” he explains “that’s why I work on this project”.

Even China, a nation which lived under the Mao regime during Apollo, where many citizens at the time would have been unaware of the historical landings, is today pursuing the Moon. In December 2013 it succeeded in landing its Yutu ‘Jade Rabbit’ lander on the surface and now plans to land a rover on the far side of the Moon in 2018. If successful, this will mark another milestone in China’s ambitious, and notoriously secretive, space program. There are also rumours for ambitions for a crewed landing.

However, it is the private companies and the incentives for private industry, which are really helping to push forward lunar ambitions. “With the creation and awarding of the Google Lunar XPRIZE, we hope to drive down the cost of commercial space missions, opening up a new era in which the Moon is accessible to all” says Gonzales. One of the most exciting things about this is the Moon is a platform which crosses so many disciplines of commercial space exploration; everything from 3D printing to habitats and communications.

“Our goal is to disrupt the ground services market, making space to ground communications and processing affordable” explains Sean McDaniel, CEO of ATLAS Space Operations, the first private deep space communications company. “In terms of the Moon, private companies can lease time on the deep space network, our plan is to have one location operational before the end of this year.” Thus providing an alternative to NASA’s Deep Space Network, which McDaniel says will provide the commercial space industry with greater access to space, driven by global demand for info and resources from space. “We need to generate a private ecosystem which supports what is happening. It is very exciting to be part of this industry.”

In the US, legislation is expected to grant approval for private missions to the Moon soon. Supported across the commercial space industry, it is the next step to enabling the new commercial race for the Moon. “Regulation matters and good people want to make sure we are successful” adds Thornton.

Of course, lunar missions are inevitably going to draw comparisons with Apollo. “Think of this as an example” says Thornton. “Columbus found the New World. Then the Mayflower settled the New World. Apollo was our Columbus in space and right now this transition is the Mayflower moment for the Moon.” It is a thinking which is echoed by others: “This is the new frontier” says McDaniel. “Because of cheaper picks and shovels, it is easier for the private industry to access space”.

For the current last man on the Moon, our return is unavoidable. “We will go back to the Moon, it is our destiny” said Gene Cernan in a recent documentary about his life. And those private companies and nations who endeavour to make it possible, will forever be standing on the shoulders of the heroes from the first race to our nearest celestial neighbour. While a Moon Village and a lunar delivery service may seem far away now, they are no further than the Moon was to America in 1962.