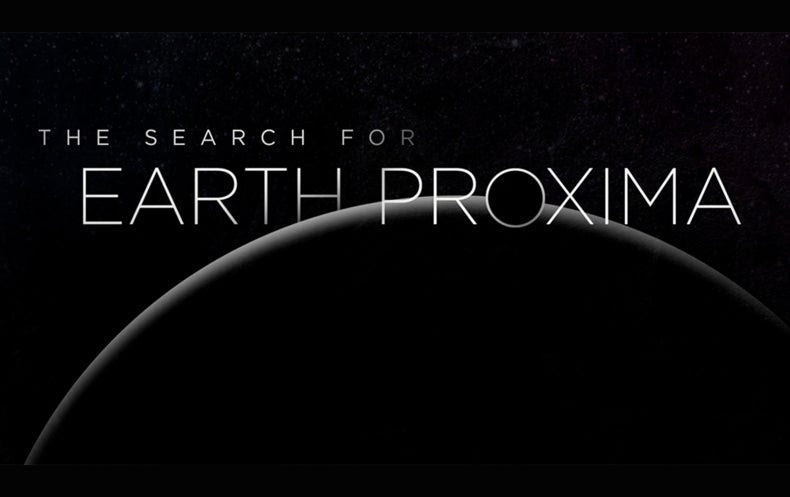 Ruslan Belikov and Eduardo Bendek, two scientists at NASA Ames Research Center, believe we may need to look no farther than the twin sunlike stars Alpha Centauri A and B some 4.4 light-years away. Extrapolating planetary prevalence per star from the current corpus of known worlds, they suggest that perhaps one in two sunlike stars may harbor a rocky planet in the not-too-hot, not-too-cold “habitable zone” where liquid water—and thus life as we know it—could conceivably exist. Presuming that these 50–50 odds hold true not only for singleton suns but also for both members of a binary star system, that would mean there is a roughly 75 percent chance that Alpha Centauri harbors a potentially habitable planet.


The Search for Earth Proxima from Speculative Films.

There is undoubtedly some wishful thinking behind Belikov and Bendek’s belief. No one yet knows the actual abundance of habitable planets in our galaxy or even how to best define what constitutes “habitability”. Some researchers think that there are fewer viable paths for planets to form around binary stars, meaning that the chances for worlds around Alpha Centauri are much less than optimistic estimates suggest. But we know this much is true—the system is our closest neighbor, so relatively nearby in cosmic terms that any promising exoplanets there should be easier to scrutinize for signs of habitability and life than all others in the universe.

A major step in those studies would be taking a planet’s picture—“direct imaging” in the parlance of astronomers, which could reveal otherwise-inaccessible details about a world’s atmosphere and surface. Snapping a photo of another Earth, which would be between billions of times dimmer than its alien sun, is typically seen as a multibillion-dollar endeavor requiring a large and highly advanced space telescope planned and built over decades. But for Alpha Centauri—and only Alpha Centauri, for no other sun-like stars are nearly as close and bright in the sky—Belikov and Bendek say the feat could be accomplished using a space telescope so small as to fit on a coffee table, built for a cost so modest that it could conceivably be launched before the end of the decade.

“This idea presents a paradigm shift from the conventional way of doing astrophysics missions,” Belikov says. The vast majority of observatories launched by NASA and other space agencies have been multipurpose platforms meant to perform broad surveys, and the previous planet-hunting missions have been no exception, favoring observations of large numbers of faraway stars densely clustered in small patches of sky rather than focusing on our sun’s nearest, brightest neighboring stars. Next-generation missions—American and European space telescopes such as TESS, CHEOPS and PLATO—will focus more on our neighbors but will still prioritize surveying large numbers of systems rather than peering deeply into only a few. Beyond that, NASA’s official timelines delay even bolder missions to image potentially habitable planets until the 2030s at the earliest. Building a dramatically downsized planet-imaging telescope to focus on a single optimal star system could complement and accelerate these far-seeing plans.

“As soon as you leave Alpha Centauri, the size of a telescope needed to image a planet in a star’s habitable zone escalates quickly,” Bendek says. A telescope with a meter-size mirror would have enough light-gathering power to efficiently probe one or two dozen stars, whereas a four-meter instrument might examine a hundred and an eight-meter one might investigate a thousand. Belikov’s and Bendek’s design calls for a mirror as small as 30 centimeters across. Paired with an instrument called a coronagraph—a series of lenses, deformable mirrors and opaque masks used to filter out most of a star’s light—the telescope could then reveal any billions-times-dimmer planets lurking in our nearest neighboring star system.

The pair formally proposed such a mission to NASA in 2014, but the agency passed over the speculative, narrowly focused project. Meanwhile, others have made exploring Alpha Centauri a priority. The recently announced Breakthrough Starshot initiative plans to send flotillas of laser-propelled spacecraft there within a generation and Rep. John Culberson (R), an influential Texas congressman, has called for NASA to develop interstellar propulsion methods to launch a Centauri-bound mission of its own by 2069, the centennial of the first Apollo moon landing.

Now, a nonprofit organization called Mission Centaur is seeking to give those projects a more proper planetary destination, by making Belikov’s and Bendek’s Centauri-centric telescope a reality via private funding. The organization is the subject of a new short documentary coproduced and directed by Brett Marty and Joshua Izenberg of Speculative Films, including interviews with Belikov, Bendek and astrobiological luminaries such as Bill Borucki and Jack Lissauer of NASA's Kepler mission and Bill Diamond of the SETI Institute. “We wanted to make Alpha Centauri a very tangible thing to the viewer, to show it in the night sky and make this quest feel real,” Marty says. “If you live in the Southern Hemisphere, Alpha Centauri is one of the brightest and most recognizable stars in the sky. But if you live in the Northern Hemisphere, you never see it.” To capture the quest for planets around Alpha Centauri, Marty and Izenberg also spent weeks in the Atacama Desert of northern Chile capturing time lapses of the star system spinning through the southern night sky, rising over lava flowing from an active volcano and looming over the European Southern Observatory’s most powerful planet-hunting telescopes.

“When we find Earth Proxima—the first truly Earth-like planet with water and an atmosphere—I think it will be like an earthquake for humanity,” Marty says. “This has the potential to radically alter the way that we, as both a civilization and as individuals, view ourselves in the universe…. If the first human sets foot on a planet in a nearby star system in 200 years, that story will have started with us. I think that's pretty powerful.”

Even if Alpha Centauri does host one or more Earth-like planets, Mission Centaur’s success is far from guaranteed. Pedro Godoy, the president of the organization’s board, refuses to disclose current fund-raising targets but says the project’s budget is “less than 10 percent of a midsize astrophysics mission.” NASA’s medium-class Explorer missions have budgets of between $180 million to $200 million, suggesting that Mission Centaur would cost less than $20 million. Already, he says, the organization has funded work to shrink key components of the telescope’s coronagraph, and has sponsored development of software algorithms to ensure the coronagraph can simultaneously nullify the light of both Alpha Centauri A and B—a crucial capability for imaging planets around either star. More funding from private institutions and potential partnerships with NASA or other public science agencies could allow Mission Centaur to build and loft its telescope within a few years on a rocket from SpaceX or another low-cost launch provider.

As risky as it might be to build a space telescope exclusively for Alpha Centauri, Belikov and Bendek say, it would be riskier still to continue ignoring the potential of the sun’s nearest neighbors, and to avoid pursuing a new era of more agile and affordable space missions. “We now know all sorts of things about thousands of planets and planet candidates that are hundreds or thousands of light-years away, but we really know almost nothing about the stars that are our next-door neighbors,” Belikov says. “I think that needs to be changed.”