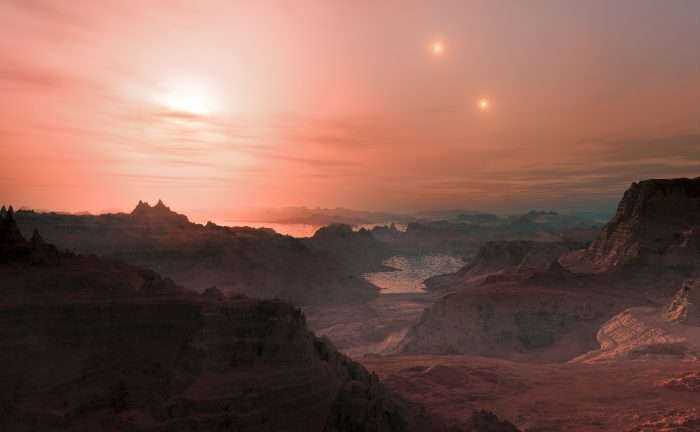 The hunt for exoplanets has been heating up in recent years. Since it began its mission in 2009, over four thousand exoplanet candidates have been discovered by the Kepler mission, several hundred of which have been confirmed to be "Earth-like" (i.e. terrestrial). And of these, some 216 planets have been shown to be both terrestrial and located within their parent star's habitable zone (aka. "Goldilocks zone").

But in what may prove to be the most exciting find to date, the German weekly Der Spiegel announced recently that astronomers have discovered an Earth-like planet orbiting Proxima Centauri, just 4.25 light-years away. Yes, in what is an apparent trifecta, this newly-discovered exoplanet is Earth-like, orbits within it's sun's habitable zone, and is within our reach. But is this too good to be true?

For over a century, astronomers have known about Proxima Centauri and believed that it is likely to be part of a trinary star system (along with Alpha Centauri A and B). Located just 0.237 ± 0.011 light years from the binary pair, this low-mass red dwarf star is also 0.12 light years (~7590 AUs) closer to Earth, making it the closest star system to our own.

In the past, the Kepler mission has revealed several Earth-like exoplanets that were deemed to be likely habitable. And recently, an international team of researchers narrowed the number of potentially-habitable exoplanets in the Kepler catalog down to the 20 that are most likely to support life. However, in just about all cases, these planets are hundreds (if not thousands) of light years away from Earth.

Knowing that there is a habitable planet that a mission from Earth could reach within our own lifetimes is nothing short of amazing! But of course, there is reason to be cautiously optimistic. Citing anonymous sources, the magazine stated:

"The still nameless planet is believed to be Earth-like and orbits at a distance to Proxima Centauri that could allow it to have liquid water on its surface—an important requirement for the emergence of life. Never before have scientists discovered a second Earth that is so close by."

In addition, they claim that the discovery was made by the European Southern Observatory (ESO) using the La Silla Observatory's reflecting telescope. Coincidentally, it was this same observatory that announced the discovery of Alpha Centauri Bb back in 2012, which was also declared to be "the closest exoplanet to Earth". Unfortunately, subsequent analysis cast doubt on its existence, claiming it was a spurious artifact of the data analysis.


However, according to Der Spiegel's unnamed source – whom they claim was involved with the La Silla team that made the find – this latest discovery is the real deal, and was the result of intensive work. "Finding small celestial bodies is a lot of hard work," the source was quoted as saying. "We were moving at the technically feasible limit of measurement."

The article goes on to state that the European Southern Observatory (ESO) will be announcing the finding at the end of August. But according to numerous sources, in response to a request for comment by AFP, ESO spokesman Richard Hook refused to confirm or deny the discovery of an exoplanet around Proxima Centauri. "We are not making any comment," he is reported as saying.

What's more, the folks at Project Starshot are certainly excited by the news. As part of Breakthrough Initiatives – a program founded by Russian billionaire Yuri Milner to search for intelligent life (with backing from Stephen Hawking and Mark Zuckerberg) – Starshot intends to send a laser-sail driven-nanocraft to Alpha Centauri in the coming years.

This craft, they claim, will be able to reach speeds of up to 20% the speed of light. At this speed, it will able to traverse the 4.37 light years that lie between Earth and Alpha Centauri in just 20 years. But with the possible discovery of an Earth-like planet orbiting Proxima Centauri, which lies even closer, they may want to rethink that objective.

As Professor Phillip Lubin – a professor at the University of California, Santa Barbara, the brains behind Project Starshot, and a key advisor to NASA's DEEP-IN program – told Universe Today via email:

"The discovery of possible planet around Proxima Centauri is very exciting. It makes the case of visiting nearby stellar systems even more compelling, though we know there are many exoplanets around other nearby stars and it is very likely that the Alpha Centauri system will also have planets."

Naturally, there is the desire (especially amongst exoplanet enthusiasts) to interpret the ESO's refusal to comment either way as a sort of tacit confirmation. And knowing that industry professionals are excited it about it does lend an air of legitimacy. But of course, assuming anything at this point would be premature.

If the statements made by the unnamed source, and quoted by Der Speigel, are to be taken at face value, then confirmation (or denial) will be coming shortly. In the meantime, we'll all just need to be patient. Still, you have to admit, it's an exciting prospect: an Earth-like planet that's actually within reach! And with a mission that could make it there within our own lifetimes. This is the stuff good science fiction is made of, you know.