In a long-awaited presentation Tuesday, SpaceX founder Elon Musk unveiled a grandiose, long-range plan for building reusable super boosters and huge spaceships to eventually carry tens of thousands of people to Mars and elsewhere in the solar system with the eventual goal of building self-sustaining colonies.

Mars is, of course, the near-term target, with SpaceX launching an upgraded Dragon spacecraft to the red planet in 2018, an unpiloted mission to gain flight experience while designing, building and testing the more advanced boosters, spacecraft and subsystems needed for his Interplanetary Transport System.

The ultimate goal is a gargantuan 400-foot-tall rocket that would boost large crew capsules into low-Earth orbit that would then be fueled for the voyage to Mars by the same reusable rocket carrying up unpiloted propellant tankers.

The cost of sending an astronaut to Mars using the Apollo moon mission architecture in today’s dollars would be around $10 billion per ticket, Musk said. Using his new rocket, spacecraft and economies of scale, Musk hopes to get the cost down to around $200,000 a ticket -- the median cost of a new home in the United States -- while carrying 450 tons to the surface of Mars per flight.

The keys, he said, are fully reusable rockets and crew ships; autonomous orbital fueling technology; using the most efficient propellants; and producing those propellants on Mars to get the crew ships back to Earth for additional flights.

“There are really two fundamental paths,” Musk told an overflow crowd at the International Astronautical Congress in Guadalajara, Mexico. “One path is we stay on Earth forever, and there will be some eventual extinction event. ... The alternative is to become a space-faring civilization and a multi-planet species.

“That’s what we want,” he said, pointing to a large picture of Mars on a screen behind him. “So how do we figure out how to take you to Mars and create a self-sustaining city, a city that’s not really an outpost but could become a planet in its own right and thus we could become a truly multi-planet species.”

In a detailed video, Musk showed off the system SpaceX engineers have been quietly designing.

Up to 100 or so astronauts -- pretty much anyone who wants to go and can afford a ticket, he said -- would board the Interplanetary Transport System spacecraft at launch complex 39A at the Kennedy Space Center. SpaceX is already modifying the retired shuttle pad for use by the company’s Falcon 9 and more powerful Falcon Heavy rockets.

That’s nearly four times the 7.5 million pounds of thrust generated by NASA’s legendary Saturn 5 moon rocket and three times more than the most powerful version of the Space Launch System rocket NASA is currently developing for its own Mars flights .

The SpaceX rocket would first boost the cone-shaped 162-foot-long Interplanetary Transport System vehicle into orbit, then return to Earth for a landing on the same pad. An identical looking tanker ship loaded with propellants then would be mounted atop the booster and launched into orbit to rendezvous with the ITS spaceship.

Up to five trips by reusable tankers would be needed to fully fuel the Mars ship before it finally blasts out of Earth orbit using a cluster of nine Raptor engines. Once on its way, two wing-like solar arrays would deploy generating 200 kilowatts of power.

Musk said the spaceship would be much roomier than earlier spacecraft, giving passengers a unique spaceflight experience during the 90 to 140 days needed to reach Mars.

“In order to make it appealing ... it’s got to be really fun and exciting,” Musk said. “It can’t feel cramped or boring. The crew compartment is such that you can do zero G games, you can float around, (have) movies, cabins, a restaurant. It’ll be like really fun to go. You’ll have a great time.”

After reaching the red planet, the spacecraft would plunge into the martian atmosphere, using an advanced heat shield to protect it from temperatures of more than 3,000 degrees Fahrenheit. Finally, the craft would deploy landing legs and settle to a rocket-powered tail-first landing.

Musk plans to reuse the Mars landers, producing propellants from the carbon dioxide -- CO2 -- in the martian atmosphere and water locked up in sub-surface ice.

“You really want to build a propellant plant on Mars and send the ships back,” he said. “Mars happens to work out well for that because it has a CO2 atmosphere, it’s got water ice in the soil. And with H2O and CO2 you can get CH4, methane, and oxygen, O2.”

Musk said the ultimate long-range goal would be to launch up to a million people to Mars in 10,000 flights, a marvelously grandiose plan that he believes could be carried out in less than 100 years.

Paying for the rockets, life support systems and all the technology needed to build a self-sustaining colony on Mars is, of course, another matter. Musk presented a slide that jokingly started with “steal underpants.”

“Obviously, it’s going to be a challenge to fund this whole endeavor,” he said. “We do expect to generate a pretty decent net cash flow from launching lots of satellites and servicing the space station for NASA, transferring cargo to and from space station.”

He said many in the private sector also have expressed interest and the government sector might join in as well at some point.

“Ultimately, this is going to be a huge public-private partnership,” Musk said. “That’s how the United States was established and many other countries around the world. Right now, we’re just trying to make as much progress as we can with the resources we have available and keep moving the ball forward.” 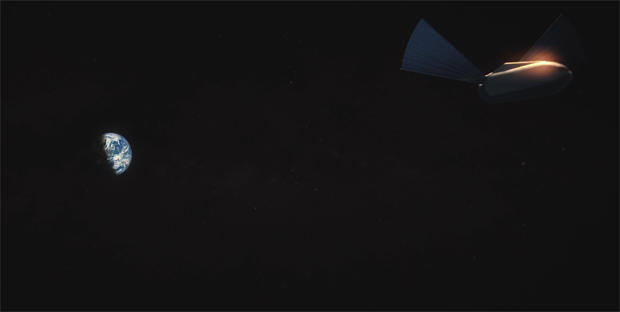 He said the company is spending a few tens of millions of dollars on the long-range Mars plans at present, but he expects to spend at least $10 billion through the initial flights of the new system. Asked what he might call the first of the new spaceliners, Musk said he liked “Heart of Gold,” the name of a starship in Douglas Adams’ “Hitchhiker’s Guide to the Galaxy.”

Developing the new boosters “is relatively straight forward,” he said, “because it amounts to scaling up the Falcon 9 booster. We don’t see a lot of show stoppers there.”

The first piloted test flight of the new spacecraft could come as early as 2024 with an arrival at Mars in 2025. But he cautioned that’s a best-case scenario. 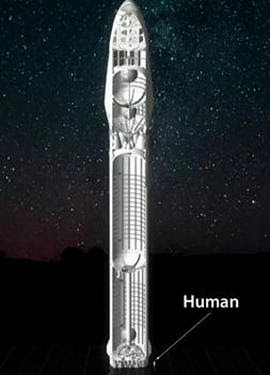 “Trying to put it all together and make this actually work for Mars, if things go super well, it might be kind of in the 10-year timeframe,” he said. “I don’t want to say that’s when it will occur, there’s a huge amount of risk, it’s going to cost a lot. There’s a good chance we won’t succeed, but we’re going to do our best and try to make as much progress as possible.”

And he believes investors will throw in support as SpaceX presses ahead.

“As we show this is possible, that this dream is real, I think the support will snowball over time,” he said. “The main reason I’m personally accumulating assets is to fund this. I really don’t have any other motivation except to be able to make the biggest contribution I can to making life multi-planetary.”

But he added that the initial trips won’t be for the faint of heart.

“The first journeys to mars are going to be really very dangerous,” Musk said. “The risk of fatalities will be very high. just no way around it. ... This is less about who goes there first. The thing that really matters is making a self-sustaining civilization on Mars as fast as possible.”

SpaceX currently builds and launches Dragon cargo ships to the International Space Station under extended contracts with NASA and is developing a piloted version of the Dragon spacecraft under another NASA contract to ferry astronauts to and from the lab complex. SpaceX also launches commercial satellites, military spacecraft and NASA science payloads.

The company’s current booster, the Falcon 9, has launched 28 times since 2010. One of those rockets failed in flight in June 2015, destroying a station-bound Dragon, and another rocket being prepared for launch earlier this month exploded on the pad at the Cape Canaveral Air Force Station.

The 2015 failure grounded SpaceX for six months while engineers worked to identify and correct a problem with critical struts inside the second-stage liquid oxygen tank. A strut failed during the launch, releasing a helium pressurization bottle, which shot up and ruptured the oxygen tank.

The Sept. 1 launch pad failure was triggered by another problem with the second stage helium system, but SpaceX has not provided any details about what might have caused the breach, what might be required to fix it or how long the Falcon 9 might be grounded. Musk said getting the rocket flying again is the company’s top near-term priority.

In the meantime, a planned November cargo flight to the space station is on hold until early next year at the earliest, NASA sources say. And it is not yet known how the failure and SpaceX’s overall Falcon 9 record -- two failures with 30 rockets -- might affect NASA’s plans for the first piloted Dragon spacecraft.