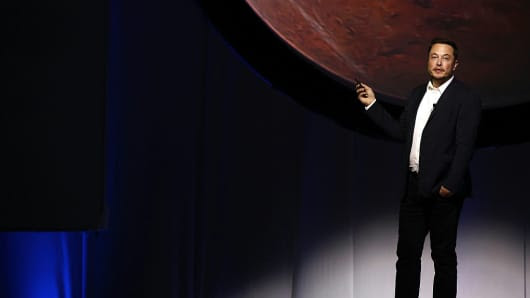 SpaceX and Tesla boss Elon Musk's vision for the colonization of Mars is as sci-fi as you'd expect with robots, glass domes and spaceships with cool names.

In a Reddit Ask Me Anything (AMA) session Sunday, the billionaire was asked a number of questions from the technical specs of his rockets to how his plans for colonizing Mars would play out.

At an international space conference last month, Musk talked about plans for SpaceX's Interplanetary Transit System (ITS) – a project that involves launching reusable rockets to Mars with manned missions potentially coming within the next decade.

The Reddit AMA was an extension of the discussion where eager fans asked Musk about his plans.

One user asked how people would live on the Red Planet. Musk said that the idea would be to build "geodesic domes on the surface" made of glass with carbon fiber frames. And "droids" would help with any mining and tunneling operations.

"With the latter, you can build out a huge amount of pressurized space for industrial operations and leave the glass domes for green living space," Musk said

He also addressed how refueling operations would work on Mars, suggesting initially a scouting mission would be sent to figure out the best way to get water from a chemical process known as the "Sabatier Reaction". This involves a reaction between hydrogen and carbon dioxide to yield methane and water.

In response to a user question, Musk also said the ITS would be powerful enough to get to fly between Mars and Earth even outside of this orbital period if there was an emergency.