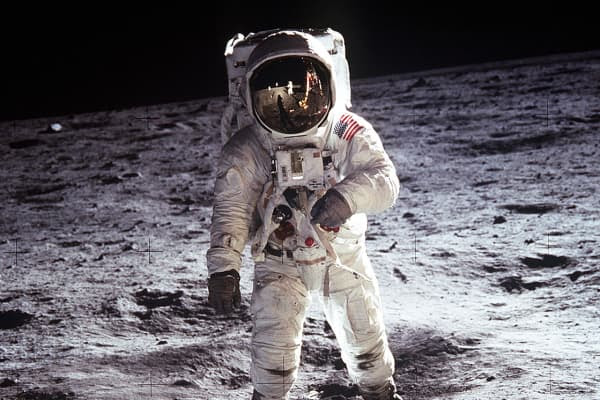 SpaceX founder and CEO Elon Musk's plans to colonize Mars are "bodacious," says Buzz Aldrin, who, as part of NASA's July 1969 Apollo 11 mission, was one of the first men on the moon.

While Aldrin respects Musk's ambition, he also points out that the tech billionaire is more focused on traveling to Mars than what people will do when they arrive there.

"He's a transportation person. He builds rockets," says Aldrin, speaking in Austin on Tuesday at the SXSW Festivals & Conferences.

Aldrin, now 87, recalls talking to Musk about his plans with regards to the red planet three or four years ago over lunch.

Aldrin summarizes the tech entrepreneur's response this way: "'We know how to get to Mars. We are going to build a big rocket, put a dragon on top, and go land on Mars.'" Musk has even named the hopefully Mars-bound spacecraft Dragon.

At lunch, Aldrin pressed Musk about the next steps: "Well, now, when your dragon lands on Mars with people, is there going to be anything down there for you to live in or do?"

Musk responded that SpaceX would send an unmanned rocket to Mars first, but "it seemed as though he hadn't given that a whole lot of thought," says Aldrin. "He's a transportation person. He's not a housing person. He's not a builder of towers."

The trip to Mars is long enough that you can't go, stay a day and come back, says Aldrin; the minimum amount of time a person could stay on Mars would be a year and a half.

"You have got to live in something. You have to prepare for all of that," says Aldrin.

In September, Musk presented his most detailed plan yet about how to travel to and colonize Mars. The plan includes detailed outlines of rocket boosters and spaceships to get there, but it remains short on details as to how to build a habitable settlement when travelers arrive.

While plans for occupying Mars are still largely theoretical and being formulated, Aldrin is passionate about the mission to build cities on the red planet.

"Our purpose, I believe, is to settle the planet Mars and I think that should be our objective," says Aldrin.