Why choose to go to the moon? Trump changes commercial space calculations 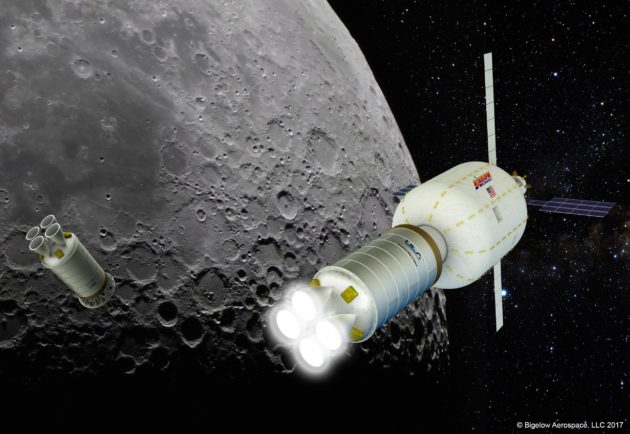 Back in the 1960s, the moon effort was aimed at demonstrating America’s greatness. A similar motivation is at work this time around: to demonstrate that President Donald Trump is making America great again.

Trump has given nods to the space effort in his two big speeches: In his inauguration address, he said America was “ready to unlock the mysteries of space.” And in his address to this week’s joint session of Congress, he said seeing American footprints on distant worlds was “not too big a dream.”

So far, however, specifics have been in short supply – no doubt because Trump has other priorities on his mind right now, and because a new administrator for NASA hasn’t yet been named.

That has left commercial players such as Blue Origin, SpaceX and Bigelow Aerospace free to fill in the gaps, adapting their goals in space to fit a first-term time frame.

This week, the billionaire founder of Blue Origin and Amazon, Jeff Bezos, acknowledged that he’s “hoping to partner with NASA on a program called ‘Blue Moon,’ where we would provide a cargo delivery service to the surface of the moon, with the intent over time of building a permanently inhabited human settlement on the moon.”

“It’s time for America to go back to the moon – and this time, to stay,” Bezos said Thursday night at an Aviation Week award ceremony. “We can do it. It’s a difficult but worthy objective.”

Bezos’ ambition to start lunar deliveries in 2020 ups the ante for NASA as well as other commercial players.

SpaceX founder Elon Musk, one of Bezos’ most outspoken rivals in the space business, has a plan to send private customers on a trip beyond the moon and back. Another billionaire, Robert Bigelow, says his aerospace company and its partners could put a space station and fuel depot in lunar orbit.

Boeing, Lockheed Martin and United Launch Alliance have similar plans on the books for putting outposts in lunar orbit. And five teams chasing after the Google Lunar X Prize are aiming to start landing probes on the moon by the end of this year, potentially beating Bezos to the punch.

In a statement emailed to GeekWire today, NASA was supportive of such efforts without mentioning Blue Origin or any other company by name:

“This is an exciting time for space exploration as a number of private companies are expressing interest in providing cargo and human spaceflight services. For more than a decade, NASA has been investing in private industry to foster what was then a fledgling enterprise. Today, private companies are providing cargo services to the International Space Station and will soon return the launch of astronauts to U.S. soil. These emerging service providers will allow NASA the flexibility to develop spacecraft and systems needed for a sustained human presence deeper into space, to the moon, and on to Mars and other distant worlds. Moving human presence deeper into space will require the best of NASA and the private sector.”

NASA’s statement makes nary a mention of the space exploration goal that was set by the Obama administration in 2010: visiting a near-Earth asteroid, or at least striking off a chunk of an asteroid for study. That omission, along with references to the moon, Mars “and other distant worlds,” might suggest that the space agency is already anticipating a shift in its exploration agenda.

Much has been made of the “billionaire space club” rivalry, but a bigger rivalry seems to be shaping up between players like Bezos and Musk on one side, who say they’re willing to share the financial burden of deep-space missions because of their personal convictions, and more traditional players like Boeing and Lockheed Martin on the other side.

A key focus for the rivalry will be NASA’s own deep-space exploration program and the development efforts for the Orion crew vehicle (led by Lockheed Martin) and the heavy-lift Space Launch System (led by Boeing). Right now, NASA is considering upgrading the first test flight of the Space Launch System, also known as SLS, to carry astronauts beyond the moon and back.

Once his team settles in at NASA, will Trump take aim at Orion and SLS, as he took aim at the F-35 fighter jet program and the next-generation Air Force One? Might there be a “New Space” vs. “OId Space” competition, as suggested in one of the Trump transition documents?

Perhaps the biggest question looming over commercial lunar missions is the same one Kennedy raised in 1962: Why the moon? Why choose this as our goal?

This year marks not only the 55th anniversary of Kennedy’s “We Choose to Go to the Moon” speech, but also the 60th anniversary of the Sputnik launch and the start of the Space Age. For Sputnik’s 50th anniversary, I laid out “five E’s” that serve as justifications for the space effort: exploration, entertainment, energy, empire building and extinction avoidance.

Different players have different motivations: For NASA, it’s mostly about science and exploration. For Musk, it’s about making humanity a multiplanet species and thus avoiding extinction. For Bezos, it’s about the long-term energy payoff provided by space solar power.

For Trump and his aides, however, the motivation appears to be more in the Cold War mode: making America demonstrably great again, preferably in time for the 2020 presidential election.

A draft proposal obtained by Politico last month talks about “private American astronauts, on private spaceships, circling the moon by 2020; and private lunar landers staking out de facto ‘property rights’ for Americans on the moon, by 2020 as well.”

Empire building, it seems, is back in style.