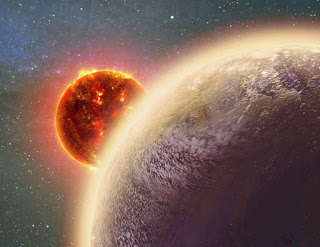 Do you like Earth? Yeah, it’s pretty neat, huh? Well despite living on a planet as awesome as our own, astronomers are super eager to find more Earths, just for fun. A planet called Gliese 1132 B (GJ 1132b if you feel like making it slightly shorter) is one such planet. It’s called a “Super Earth” because it’s larger than our own planet, but is thought to be made of similar stuff, and researchers just discovered something extremely awesome that makes GJ 1132b the most Earth-like exoplanet humans have ever found: it has an atmosphere.

Finding planets in the depths of space that bear similarities to Earth is a long and complicated process. First we have to find the planet itself, then we have to determine its size, take an educated guess as to what it’s made out of, and figure out how far away it sits from its star. If all of those tests, readings, and measurements come back in the right neighborhood, scientists have to determine if the world has an atmosphere, because without that there’s essentially zero chance that life is or could be supported on its surface.

GJ 1132b has managed to make it past all of those hurdles, but even that strict criteria doesn’t confirm the planet’s ability to host living things. The planet is thought to be quite hot, with temperatures at or above those of Venus, which is hundreds of degrees hotter than Earth. If life does exist on the planet, it could be dramatically different from anything humans have ever imagined, but we won’t know for certain for a long while. In the meantime, researchers are suggesting that observatories around the world give the planet some special attention going forward.