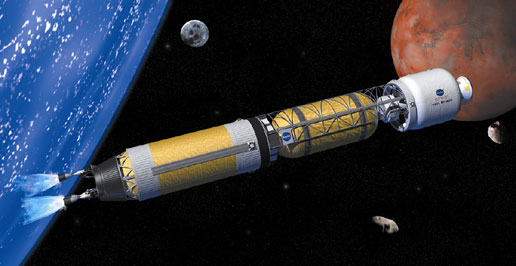 As the U.S. government continues to pursue plans for a crewed mission to Mars, NASA has contracted with BWXT Nuclear Energy Inc. of Lynchburg, Virginia, to advance concepts in Nuclear Thermal Propulsion (NTP), which could drastically reduce travel times to Mars.

This is part of NASA’s Game Changing Development Program, which takes ideas from academia and industry as well as NASA and other government programs, to advance new approaches to space technologies to accommodate the changing needs of U.S. space efforts.

NTP is not a new concept, but it was abandoned in 1972 when plans for a Mars mission were shelved. NASA conducted ground tests since 1955 to determine the viability of NTP and has occasionally been revisited as a conceptual part of Mars mission feasibility studies.

The advantage of NTP is mainly in that it can provide twice the rocket thrust of the Space Shuttle Main Engines (SSMEs), which are among the most powerful chemical rockets ever developed.

Sonny Mitchell, Nuclear Thermal Propulsion project manager at Marshall, said: “As we push out into the Solar System, nuclear propulsion may offer the only truly viable technology option to extend human reach to the surface of Mars and to worlds beyond. We’re excited to be working on technologies that could open up deep space for human exploration.”

Rex Geveden, BWX Technologies’ president and CEO, said: “We are uniquely qualified to design, develop and manufacture the reactor and fuel for a nuclear-powered spacecraft. This is an opportune time to pivot our capabilities into the space market where we see long-term growth opportunities in nuclear propulsion and nuclear surface power.”

Using conventional rockets, a mission to Mars at opposition would take six months. NTP could cut the travel time to four months. There are several advantages to cutting down travel time. One is that the astronauts would get less exposure to solar radiation – something that is of greater concern, as some recent studies suggest that the Apollo lunar astronauts may have had their health more adversely affected by radiation during their journeys than previously realized.

A shorter travel time will also reduce the vehicle’s mass. It would need to carry less fuel and fewer consumables – and could, therefore, carry more payload.

It works by expanding a propellant, such as hydrogen, by heating it in a nuclear reactor. This differs from chemical rockets, in which the fuel is the heat source. As a result, an NTR rocket can use a propellant with a low molecular weight rather than complex fuels such as kerosene or hydrazine.