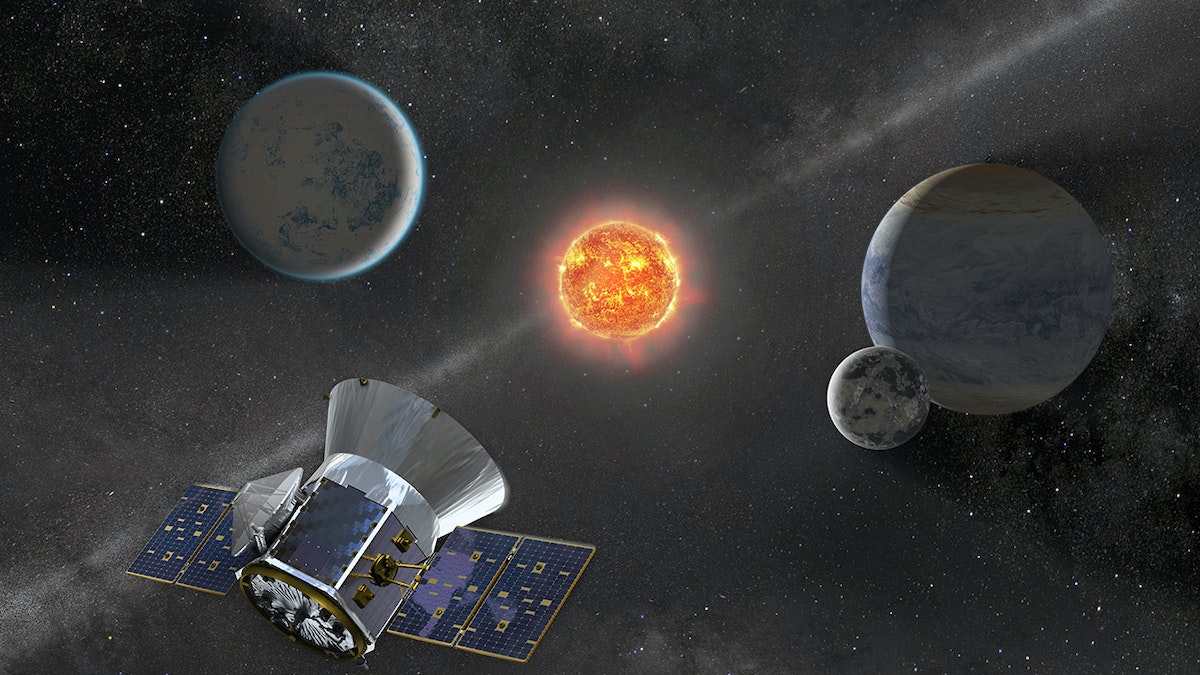 TESS will hunt for alien worlds around stars in the sun's neighborhood — planets that other missions can then study in detail. And the spacecraft will be incredibly prolific, if all goes according to plan.

"TESS is going to dramatically increase the number of planets that we have to study," TESS principal investigator George Ricker, of the Massachusetts Institute of Technology, said during a pre-launch briefing Sunday (April 15).

"It's going to more than double the number that have been seen and detected by Kepler," Ricker added, referring to NASA's Kepler space telescope, which has spotted 2,650 confirmed exoplanets to date —about 70 percent of all the worlds known beyond our solar system.

And the Falcon 9's first stage came back to Earth less than 9 minutes after liftoff today, touching down softly on a robotic SpaceX "drone ship" stationed in the Atlantic Ocean. SpaceX has now pulled off two dozen such landings during Falcon 9 launches — part of the company's push to develop fully and rapidly reusable rockets and spacecraft, a breakthrough that SpaceX founder and CEO Elon Musk has said will revolutionize spaceflight.

SpaceX has re-flown 11 of these first stages to date, but the tally didn't increase today: This Falcon 9 was brand-new.

Today's launch was originally scheduled for Monday evening (April 16), but it was delayed by two days to give SpaceX time to investigate a potential issue with the rocket's guidance, navigation and control systems.

Looking for nearby worlds

Like Kepler, TESS will find alien planets using the "transit method," noting the tiny brightness dips these worlds cause when they cross their host stars' faces. But there are some big differences between the missions.

During its prime mission from 2009 through 2013, Kepler stared continuously at a single patch of sky, monitoring about 150,000 stars simultaneously. (Kepler is now embarked on a different mission, called K2, during which it studies a variety of cosmic objects and phenomena, exoplanets among them. But the iconic telescope's days are numbered; it's almost out of fuel.) Most of these stars are far from the sun — from several hundred light-years to 1,000 light-years or more.

But TESS will conduct a broad sky survey during its two-year prime mission, covering about 85 percent of the sky. The satellite will focus on the nearest and brightest stars, using its four cameras to look for worlds that may be close enough to be studied in depth by other instruments.

Indeed, TESS will rely on a variety of other telescopes on the ground and in space to help determine which of its "candidates" are bona fide planets, and to characterize the newly discovered worlds. One such partner will be NASA's $8.8 billion James Webb Space Telescope, which is scheduled to launch in 2020. James Webb should be able to probe the atmospheres of at least a few TESS planets for oxygen, methane and other possible signs of life, NASA officials have said.

The mission will be a big step toward exploring such worlds up-close as well, team members said. In 50 to 100 years, humanity will probably be capable of launching tiny robotic spacecraft to explore a number of nearby exoplanets, perhaps using technology like that being developed by the $100 million Breakthrough Starshot project, MIT's Ricker said.

"We are putting together a catalog of the very best targets for those probes," he said. "That's one thing that I think will be a lasting legacy of TESS."

TESS also differs from Kepler in its orbit. Whereas Kepler loops around the sun, TESS will zoom around our planet, on a highly elliptical, 13.7-day orbit that no spacecraft has ever occupied before.

"It really is a Goldilocks orbit," Lockwood told Space.com.

But TESS won't get there for a while. After a number of engine firings and one dramatic maneuver — a close flyby of the moon on May 17 — TESS will arrive in its final orbit in mid-June, if all goes according to plan. The science campaign will start shortly thereafter.

The TESS mission is capped at $200 million, not including launch costs