"We should have Starship Mk1 with 3 Raptors almost ready to fly by then." 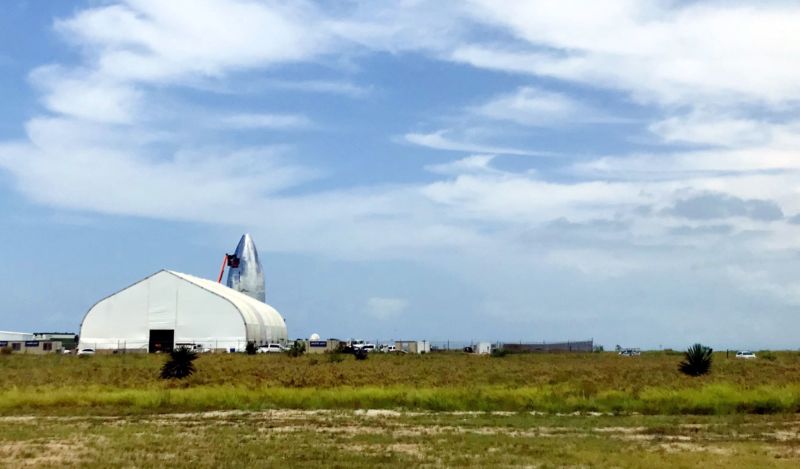 In a series of tweets on Saturday night, SpaceX founder Elon Musk said he planned to provide an update on the development of the company's Starship project on August 24. This new spacecraft will serve as both the upper-stage of a large rocket as well as a vehicle capable of propulsively landing on distant worlds and returning to Earth.

Musk said the update would take place in Boca Chica, an unincorporated area along the southern Texas coast near the border with Mexico. This is where the company recently flew a stubby prototype of Starship and is also building a full-scale version of Starship for suborbital tests called Starship Mk1. A separate team of SpaceX engineers is building a similar prototype, Starship Mk2, in Cocoa, Florida.

Through this internal competition, the teams of engineers are testing systems for structures, propulsion, and avionics that will allow Starship to safely land on, and return from, a variety of surfaces and environments. Potential targets include the dusty, airless surface of the Moon, and Mars with its thin atmosphere and more Earth-like geology.

His presentation, Musk said Saturday night, will include a "detailed review of the first orbital Starship, explaining the pros & cons of each design decision."

In recent years, the development of Starship and its revolutionary new capabilities for spaceflight has consumed much of the time and attention of Musk at SpaceX. Long-time employees have likened his interest and intensity to the first years of the company, when he pushed hard, broke barriers, and rapidly iterated on designs to produce the Falcon 1 rocket in a span of a little more than three years. The aerospace community was skeptical about the company's ability to produce a working rocket then, and Musk seems equally determined to prove the many Starship doubters in the traditional aerospace sector wrong again.

A little more than a week ago, the company took the leash off its Starhopper test vehicle for the first time, demonstrating the controlled flight of the methane-fueled Raptor engine. During the 20-second test, Starhopper showed that Raptor could not only breathe fire, but that the complex engine could be controlled well enough to ascend, hover, move a short distance horizontally, and then safely return Starhopper to the surface.

The company's work on Starship Mk1 was evident when Ars visited the site for the Starhopper test. With employees working at all hours, the vehicle in Texas was broken into two pieces. The top half included its nose cone, and the aft section was composed of barrels making up the fuselage. Although three more barrels had yet to be added, it was already an impressively large vehicle.

In regard to his August 24 presentation, Musk said of this suborbital test vehicle, "We should have Starship Mk1 with 3 Raptors almost ready to fly by then." The orbital version of Starship will ultimately fly on six Raptor engines. The flight of that vehicle into space may come in 2020, or 2021.