And the tech could power asteroid-deflecting lasers as well. 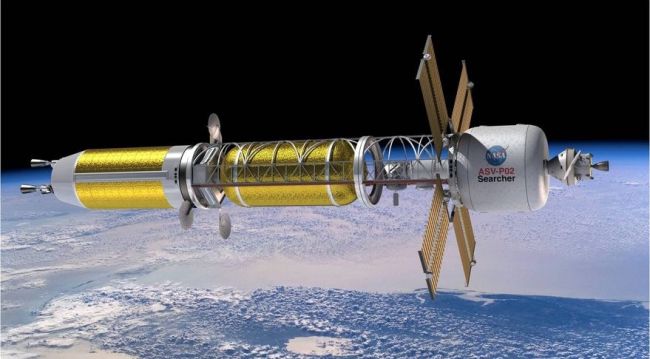 During the sixth meeting of the National Space Council (NSC) today (Aug. 20), the NASA chief lauded the potential of nuclear thermal propulsion, which would harness the heat thrown off by fission reactions to accelerate propellants such as hydrogen to tremendous speeds.

Spacecraft powered by such engines could conceivably reach Mars in just three to four months — about half the time of the fastest possible trip in a vehicle with traditional chemical propulsion, said NSC panelist Rex Geveden, the president and CEO of BWX Technologies Inc.

And that's a big deal for NASA, which is working to get astronauts to Mars in the 2030s.

"That is absolutely a game-changer for what NASA is trying to achieve," Bridenstine said. "That gives us an opportunity to really protect life, when we talk about the radiation dose when we travel between Earth and Mars."

That dose increases, of course, the longer astronauts spend in deep space, away from the protective bubble of Earth's magnetosphere. And recent research suggests that the radiation dose accumulated by Mars-bound astronauts could damage their brains, affecting their moods as well as their ability to learn and remember.

Bridenstine also stressed the utility of nuclear thermal propulsion for applications closer to home. For example, the increased power could potentially allow Earth-orbiting craft to steer out of the line of fire of anti-satellite weapons, he said.

Such weapons are being developed by both China and Russia, Joseph Maguire, the U.S. acting Director of National Intelligence, said during the NSC meeting today.

"Both countries view the capability to attack space systems and services as part of their broader efforts to deter or defeat an adversary in combat," Maguire said. "In short, the threat to U.S. and allied space systems continues to grow unabated."

“You certainly can imagine using a compact, high-temperature gas reactor to power a directed-energy weapon, for example," Geveden said. "[The U.S. is] using diesel fuel now, but that's not sustainable over a sustained battle."

This reference to high-powered lasers caught Bridenstine's attention. He asked Geveden if such tech could be used to deflect an incoming asteroid and to deorbit space junk. The potential is definitely there in both cases, Geveden replied.

Bridenstine then turned to Vice President Mike Pence, who chairs the NSC. "I think, Mr. Vice President, there's an amazing opportunity here that the United States of America should take advantage of," Bridenstine said.

The nation may already be on that path. In May, the House Appropriations Committee approved a bill that allocates $22.3 billion to NASA — including $125 million to develop nuclear thermal propulsion tech. Congress also provided $100 million for the same purpose in fiscal year 2019.

Nuclear thermal propulsion is not to be confused with radioisotope thermoelectric generator (RTG) tech. RTGs convert the heat generated by the radioactive decay of plutonium into electricity, which then powers spacecraft instruments and other gear. NASA has been using RTGs for decades; they've powered some of the agency's most famous planetary explorers, including the twin Voyager probes, the Cassini Saturn spacecraft and the Curiosity Mars rover.

Other nuclear tech could aid exploration in the future as well. For example, researchers are developing a small fusion reactor that could power crewed outposts on the moon and Mars. This "Kilopower reactor" could be ready for a flight demonstration in 2022 if NASA so desires, project team members said recently.

The NSC helps steer the nation's space policy. President Donald Trump reinstated the council in 2017; it had last been active in the early 1990s.